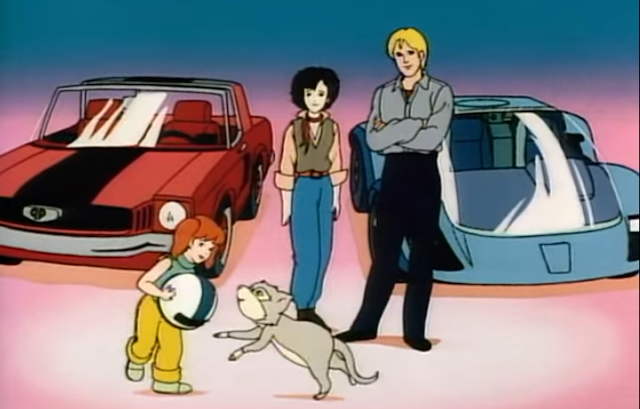 I love finding short-lived '80s TV shows on YouTube and one that I recently stumbled onto is the Pole Position animated series. Under license from Namco and produced by DIC Entertainment (Inspector Gadget, The Real Ghostbusters), the Pole Position cartoon aimed to capitalize on the popular video arcade game by the same name. However, the TV series was similar only in name, following the Darrett family who used their stunt car driving show as a front for crime fighting.

The real stars of the shows were the two cars, Roadie and Wheels, who both had special transforming features and computer modules that made them talk. Voice actors on the show included David Coburn as Dan Darrett who later voiced Captain Planet in the '90s series Captain Planet and the Planeteers and Melvin Franklin of the Motown group The Temptations who voiced Wheels.

Pole Position has been released to DVD by Brightspark Productions in the UK and 10 episodes in a Mill Creek Bundle with C.O.P.S. and Jayce and the Wheeled Warriors in the US. But as mentioned before, the WildBrain Super Heroes channel on YouTube has all 13 episodes! Full playlist embedded below...