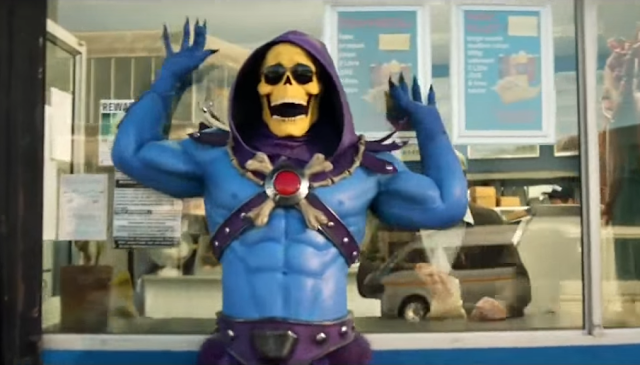 All those years inside Snake Mountain must have finally gotten to Skeletor. In a new television commercial , the evil nemesis of He-man feels epic after racking up the savings at UK retailer MoneySuperMarket. He breaks out of Snake Mountain his suburban townhouse and first greets a woman neighbor with some moves that would impress Ravishing Rick Rude. He then dances through town with Irene Cara's "Fame" as his soundtrack, spreading his blue and purple cheer to the townsfolk. Skeletor even dances past He-man who is impressed with his epic dance.

The new ad is part of an "Epic" marketing campaign for MoneySuperMarket. According to Ad Week, the campaign includes an "Epic Strut" ad which became the UK's most complained about ad in 2015. You'll hear no complaints from me about the new #EpicSkeletor ad. It's quite hilariously and I even enjoyed the special effects shown from Skeletor's staff and He-man's power sword. Check it out below and tell me your thoughts in the comments...