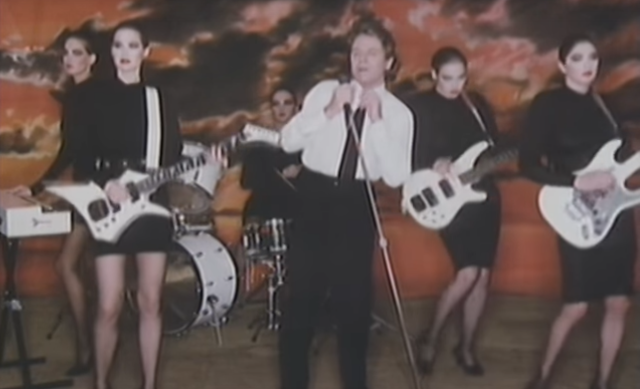 The half hour TV documentary series Cover Story was one of the first original programs broadcast on the USA Network and gave an inside look at celebrity entertainers. Shortly after his supergroup project The Power Station and his first #1 solo hit "Addicted to Love," Cover Story sat down with Robert Palmer in 1986 to discuss his life and successful music career. The short documentary also provided commentary from friends like comedian David Brenner and keyboard/guitarist Jerry Harrison from The Talking Heads.

I first took notice of Robert Palmer's music around the late '80s. I remember my mother purchased his 1988 Heavy Nova album on cassette and we would listen to it mainly for the hit song "Simply Irresistible." Lately, I've heard a local radio station play several of hits both from his solo career and with The Power Station. I've only scratched the surface of his discography (mainly his singles), but it doesn't take very long to hear how diversified his sound was combining elements of rock, reggae, Rn'B, jazz, and other styles. I also liken him to his fellow English countryman Phil Collins in that he really sings with passion. From his only live performance with The Power Station on SNL to singing "Mercy Mercy Me / I Want You" on Arsenio, Palmer held nothing back with each performance.

It's truly a shame he's been gone now for almost 14 years and at just 51 years old. I hope watching this short documentary might encourage you (and me) to rediscover his music and even delve beyond his popular singles from the mid/late '80s...