“IDW Games has a fantastic history of bringing licensed products to market, and we’re thrilled to work out a partnership and see our classic games on the tabletop,” says Fred Chesnais, Chief Executive Officer, Atari.

The series of games will launch in fall 2017 with Centipede followed intermittently by other Atari titles. If you plan to attend the Gama Trade Show in Las Vegas next week, you can get an exclusive first look at the new Atari tabletop games at IDW Games Booth #222.

About IDW Games:  IDW Games publishes both creator-owned and licensed tabletop games. The division was launched in 2014 and has quickly found success with one of the top-selling card games of the year with the Japanese import card game Machi Koro. IDW Games offers a mix of popular licensed games such as The X-Files and CHEW as well as strategic hobby games such as Tammany Hall and Yedo. IDW Games’ diverse line-up includes the international phenomenon Machi Koro, as well as hit licensed games such as X-Files, Back to the Future, The Godfather, and TMNT. 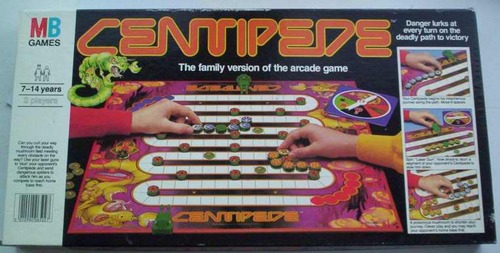 As someone who remembers playing the board game adaptions of '80s video games, this could be a really fun partnership. I applaud Atari for developing their classic titles in unique ways for modern fans to consume (including the new Swordquest comic series.) Being a child of the '80s makes me want Atari to succeed as a modern day company and I'll will definitely check out these new board games.