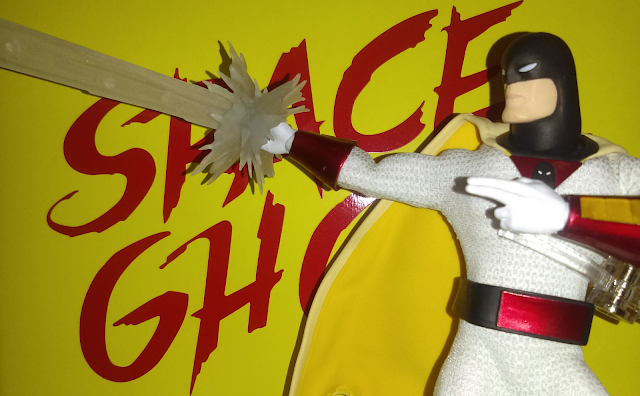 Greeting Citizens!! It's time for another Watch & Win Review which gives you the opportunity to check out some rad retro stuff and then enter for a chance to win! We've partnered with Entertainment Earth for several years now on some great review items and this may be the best yet. This time the featured collectible is an exclusive action figure that you won't find anywhere else!


In 1966, Hanna-Barbera introduced a new crime fighting superhero on network TV called Space Ghost. Voiced by the legendary radio announcer and actor Gary Owens, Space Ghost became a pop culture icon spanning 4 decades. The animates series would run through 1968 for 42 episodes and then remain in syndication throughout the 1970s. Space Ghost would then reappear in the 1981 show Space Stars, a 60-minute show of 5 different superhero segments. Then in 1994, the Cartoon Network hosted a talk show which featured archived Space Ghost animations cels titled Space Ghost Coast to Coast.

Mezco's One:12 Collective figures offers a rendition of Hanna-Barbera's superhero Space Ghost and his sidekick monkey Blip. Our friends at Entertainment Earth now have an exclusive version that Glows-in-the-Dark! This exclusive features over 32 articulation points, intricate sculptural work, incredible costume detailing, and tons of accessories for an iconic classic vision with a real-world look. Space Ghost also comes with his trusted companion, Blip the monkey, who also boasts an exceptionally realistic sculpt and more than 10 points of articulation. Perhaps best of all, this exclusive version of Space Ghost actually glows in the dark! Whether you're a fan of the classic 1960s cartoon or Space Ghost: Coast to Coast, or you know him as Thaddeus "Tad" Ghostal or Thaddeus Bach, this Space Ghost Glow-in-the-Dark One:12 Collective Action Figure is a must for your collection.

I was lucky enough to get my hands on one recently and filmed a review so you can get a closer look...

Best of all, this figure is in stock at Entertainment Earth and you can order very own Exclusive Mezco Glow-in-the-Dark Space Ghost now! As a thank you for watching the review and being a loyal Rediscover the 80s follower, here is a chance to win this great collectible. Use the Rafflecopter widget below to earn up to 6 entries in the giveaway and then come back to the widget each day over the next week and tweet about the contest again to earn bonus entries. Deadline to enter is Thursday June 29 at 12am CST. US and Canada residents only. Winner will be announced Friday June 30 upon email confirmation. See terms and conditions below for full contest details and rules. Good luck!


a Rafflecopter giveaway
Terms and conditions: Contest open to U.S. and Canada residents only. Giveaway retail value is $70. One winner to be chosen at random and contacted via email. Once a valid U.S./Canada address is confirmed within 24 hrs, prize will be shipped to winner free of charge. If winner does not respond to the email within 24 hrs, a new winner will be chosen at random. Winner's first name, last initial, and hometown will be announced on RD80s social media. Email addresses used only for future RD80s giveaway announcements. No third-party selling. By entering this contest you agree to allow up to 12 weeks for delivery, accept the fate of packages getting lost, stolen or damaged (neither Entertainment Earth nor Rediscoverthe80s.com are responsible for replacement or compensation either in product or currency) and a correct, valid physical address must be provided (wrong address provided, unfortunately no shipment). In case of prize item being unavailable, an item of similar value will be substituted.