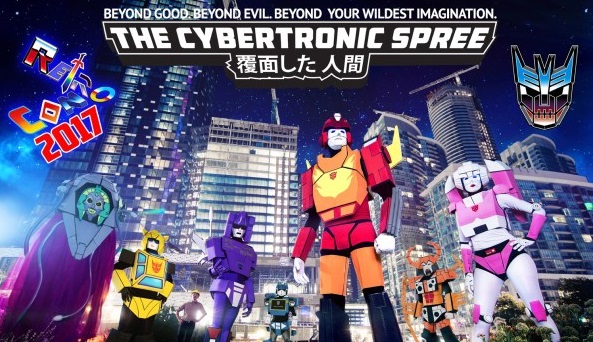 While the first day of Retro Con 2017 might have wrapped at 6pm, the party continued a couple hours later as the Transformers tribute band Cybertronic Spree took the stage. Directly across the street from the Greater Philadelphia Expo Center is Arnold's Family Fun Center. The Water Tower section of the building houses bowling lanes and for our purposes, an area with a stage and plenty of adult beverages. The sold out concert quickly became my favorite part of Retro Con 2017.

I had watched a few videos of Cybertronic Spree on YouTube prior to seeing them live. Let me tell you, the videos (and the one you are about to see) are nothing compared to the live atmosphere I witnessed first hand. Wyatt and I got to pose with them earlier in the day and I was really impacted by their energy even then. 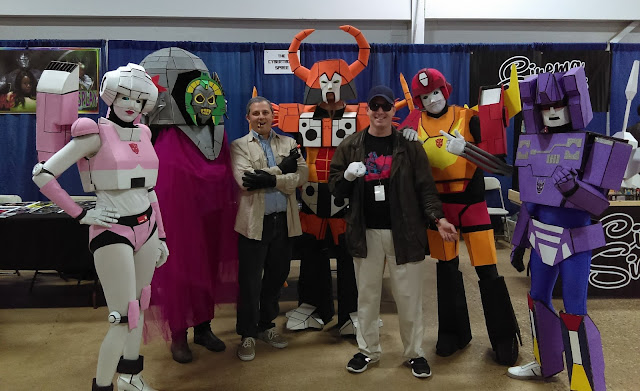 We showed up for the concert about 15 minutes earlier. The band made its way through the audience to the stage to much applause. The concert began surprisingly with the theme from G.I. Joe: the Movie but just as you were ready to scream "G.I. Joe", the band backhanded their Hasbro counterparts with the Transformers theme. It was a ploy that the audience loved.

Their set was truly the most unique group of songs I've ever heard performed live. Of course, it catered directly to its Retro Con audience with several tracks from the Transformers: The Movie soundtrack. But the band even made those songs unique by using the Voltron 2017 theme to intro "Nothing's Gonna Stand in Our Way." Another soundtrack song even ended with Guns N' Roses "November Rain." Those infusions definitely were not heavy handed and transitioned beautifully. Cartoon themes of decades past echoed through the room including "Jayce and the Wheeled Warriors" and "Star Wars: Droids." But my anticipation lied on hearing Stan Bush's anthems "Dare" and "The Touch" as well as N.R.G.'s "Instruments of Destruction" from the soundtrack. TCS definitely delivered on all of them. Ending the show with "Ghostbusters" was just icing on the cake.

The show stopper was definitely R.C. and her vocal chords. Wailing at the top of her lungs on "Cybertronic Warrior" and many others left many concert goers shouting for her hand in marriage. While her performance stood out, Unicron's lead guitar and the rest of the band also gave a great performance. Hot Rod's energy and chemistry with R.C. also impacted the overall concert.

I've put together a short 7-minute compilation video which really doesn't translate the exciting experience I had at the show. It does, however, give a small glimpse into the set list mentioned above and the chemistry TCS had among the band itself and the fans. When you are done watching, give The Cybertronic Spree a follow on Twitter and Facebook to get the latest concert information. Also visit the official TCS YouTube channel for high quality videos of live and in-studio performances.

Metal (robots) has never made metal (music) sound so good...