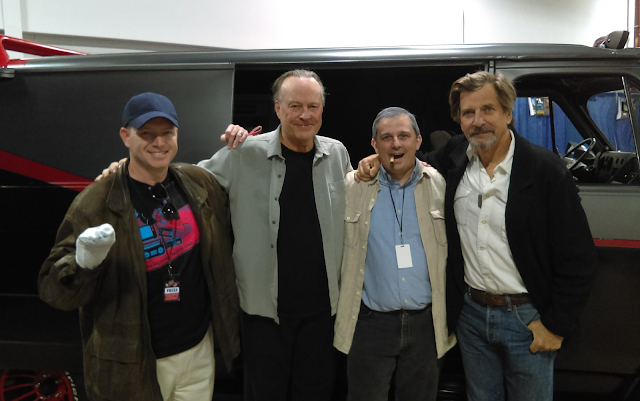 Retro Con 2017 featured some great celebrity guests including several TV and voice actors from the '80s era (and beyond.) Wyatt and I got to meet voice actor Rob Paulsen who most would know as Raphael from the Teenage Mutant Ninja Turtles series from the '80s and also Donatello from the current Nickelodeon series. Rob graciously talked with us for about 15 minutes ranging in topics from Big Ten football to his recent guest appearance on Gilbert Godfreid's Amazing Colossal Podcast. Arthur Burghardt who portrayed characters on G.I. Joe: A Real American Hero, Transformers, and Challenge of the GoBots was also in attendance. While we didn't get to meet Arthur personally, we did attend the panel with him and Rob Paulsen which centered around their careers and even working together.

While we were very grateful the two voice actors came to the show, our primary excitement was to meet two of our childhood heroes from The A-Team. We both have written several articles for RD80s including a month long tribute a few years back on The A-Team's 30th anniversary. Dwight Schultz (H.M. Murdock) and Dirk Benedict (Templeton "Face" Peck) reunited for our utter childhood-like amusement. First, we stepped in line to meet Dwight Schultz... 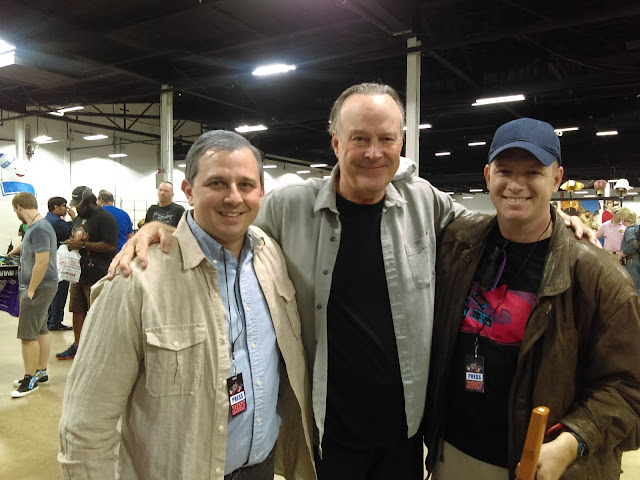 While I'm sure we looked liked total goobers, fanboys, or just plain weirdos dressed like 30-year old TV characters, Dwight got a chuckle out of mainly Wyatt's tribute costume to Murdock. I had him autograph my Funko POP figure of Murdock and inquired about how much of his character was improvised. Surprisingly, most of his antics were actually scripted! Wyatt, who is active in the United States Air Force, presented Dwight with a coin depicting the logo of his USAF unit. He was very appreciative (almost surprised) to receive the coin and thanked him for the gift. 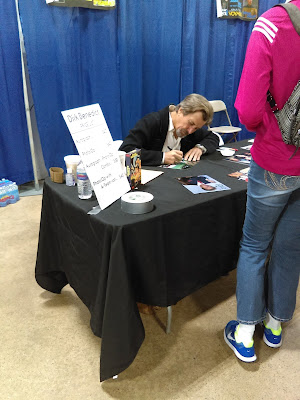 Before meeting Dirk Benedict, we decided to peruse the vendor tables with our friend Bill. In the afternoon, we came back and got in line to meet Dirk. While I intended for him to sign my Funko POP figure of Face, I decided my wallet was a little light and that we'd just talk with him for a minute. However, that didn't happen because two Battlestar Galactica fans wearing Starbuck jackets to be autographed were given priority in line. Wyatt, Bill, and I decided to come back later and pool our resources to get a photo with both actors in front of B.A.'s van sitting nearby. 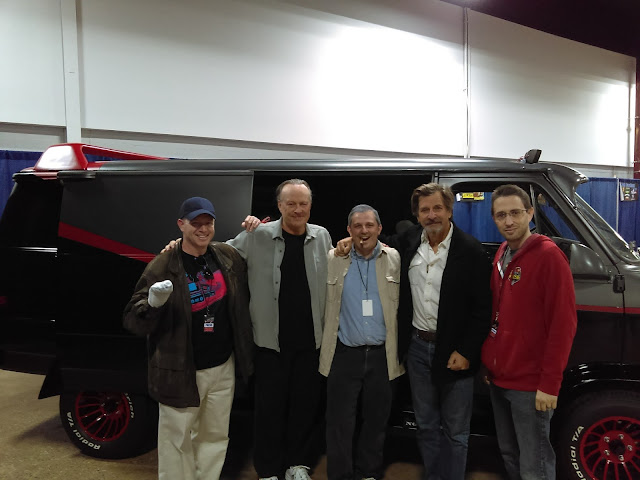 At that time, we got to chat a little bit with Dirk and Wyatt presented him with another USAF coin. Dirk was also very appreciative and even marveled at Wyatt's generosity. Later, when we posed with the van, Dirk finally got a look at my Hannibal Smith costume and when he wrapped his arm around my neck joked "You are about as tall as George." I laughed as he was referring to George Peppard who played Hannibal on the show. Before he even cracked about George's height, I had told Wyatt I was surprised at how tall both of them were. 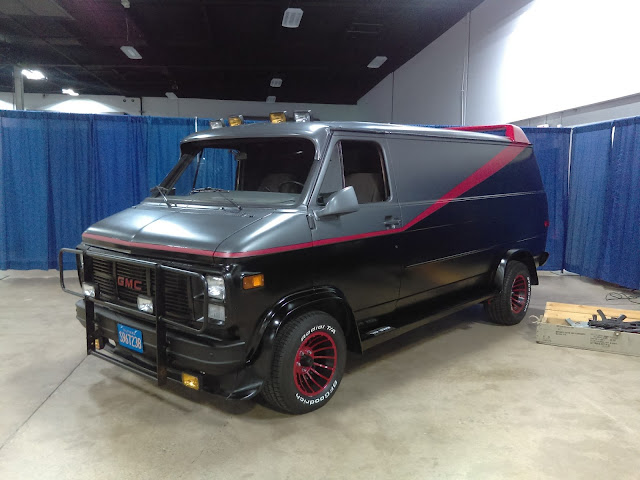 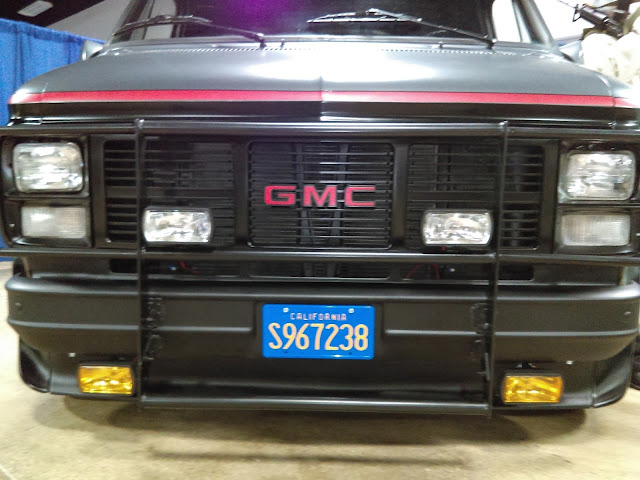 While I would have been delighted to meet both men in some other setting, having a replica of B.A.'s van as the backdrop sent our experience into the stratosphere. The details were all there and you could really tell a fan meticulously brought a highly sculpted plan together. While the interior was still a work in progress including replica surveillance equipment, the exterior looked like Mr. T polished the van himself. This was the first time I had met the van in person and it was everything I had hoped it would be. 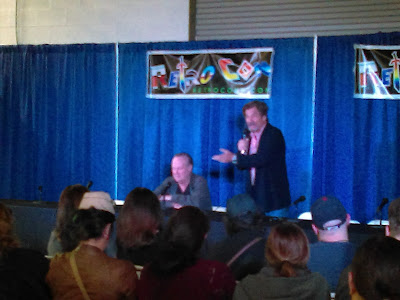 I got the privilege of interacting with guys one more time on Sunday as we sat in on their panel. Both were very candid about their time on the show which was bittersweet. While it was probably the most fun job they had during their careers, the executives made it very difficult and unrewarding. While the show sat atop the Neilsen ratings, the execs tried to inflict changes throughout its run in almost like an act of sabotage. Dirk even expressed feelings of being blacklisted after the show abruptly ended. It was then my mind grasped their perspective for the first time.

The panel continued with questions from the fans. As I listened to several answers, a question popped in my head and I got the host's attention. He came over with the microphone and I proceeded to ask the actors about their thoughts of The A-Team movie remake (which featured cameo appearances from both) and Hollywood remakes in general. While they didn't address the movie specifically, Dirk answered very candidly about how he felt remakes were money-driven and lacked creativity compared to TV shows of yesteryear. He went on to compare how creators like Glen Larson and Stephen Cannell used blank canvases to develop their shows while Hollywood remakes never start from that blank canvas and ask modern writers to build upon someone else's idea. It was a very meaningful answer and while I had fun with the remake, I'm pretty sure neither of them own it on Blu-ray like I do.

I think I can speak for Wyatt that it was a tremendous honor and dream come true to meet two of our childhood heroes. Retro Con has picked some great, personable guests each time I've attended the show. So often I hear of horror stories with celebrities but so far they've truly picked people who really care about the fans and not just the paycheck that goes with attending shows.
Newer
Older
Powered by