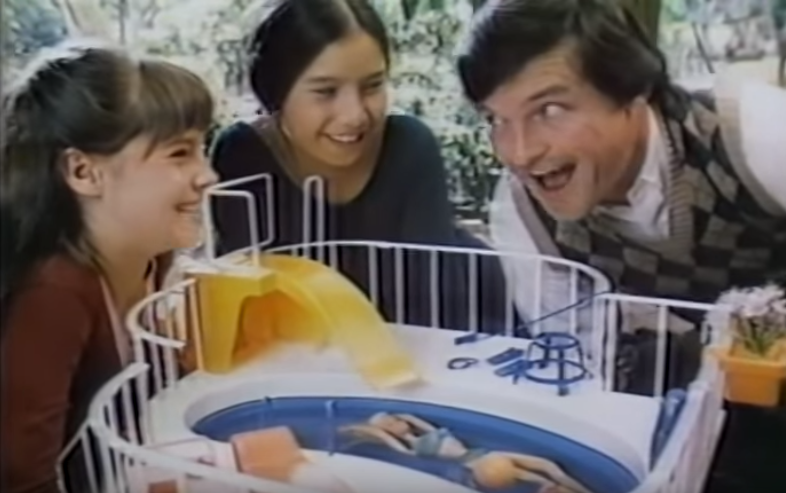 One of the most recurring characters in early '80s toy commercials seemed to be the "goofy dad." He was used in a couple different ways but the obvious ploy by toy companies was to get parents involved in playtime. While most commercials showed kids playing and interacting with the featured toys, goofy dad was always lurking to join in the fun.

Goofy dad would sometimes be directly involved with the kids and their playtime in the commercial, often playing the bad guy. Other times, kids would disrupt goofy dad's normal routine of trying to read the evening newspaper or exercising on the stationery bike. When it came to board games, it was always goofy dad who would play the loser, overreacting to his battleship being sunk or toppling over the Jenga tower.

My first notion (as a dad now) would be to take offense when rediscovering these toy commercials. Why was it always the dad that was the bird brain? But if I truly think about how I've played with my kids over the years, the goofy dad character is probably accurate. I don't mind playing the bad guy or losing a board game if it means bringing a smile to my kid's face.

Check out some of the goofy dads I've found in early '80s toy commercials. If you remember any others, please leave a link in the comments!

Here's a case of goofy dad playing the bad guy. I love the smirk on his face after he says "You're trapped Turbo!"

Masters of the Universe

Goofy dad looks up from his newspaper and is surprised by Castle Grayskull. Really? You think these kids had been saving up to buy it behind his back? Even so, I do love that they let goofy dad activate the trap door and "save" the castle.

Which figure does the goofy dad get? Yep, Skeletor. I guess he didn't realize that whoever plays with "the man with all the muscles" gains his strength in real life.


Castle Grayskull has been taken over by the evil powers of goofy dad! Apparently even the dimwitted Ram Man has more brain power than goofy dad to trick him into lowering the drawbridge!


All goofy dad wants is to burn a few dad-bod calories after work. He doesn't need all this split personality banter!

Goofy dad has a right to swim in Barbie's dream pool, right? After all, he probably paid for it!

That's right, goofy dad. Hold your head in the shame of being defeated by your own spoiled kid. Maybe next time you'll buy him the normal board game and not this "electronic" stuff.

Who's dumb enough to knock over the Jenga tower? Yep, goofy dad.

Only goofy dad is dumb enough to call up the grandparents and push them closer to a heart attack with the thought of new twin grandkids!

Only goofy dad would have the horrible luck of landing on the longest chute on the entire board.