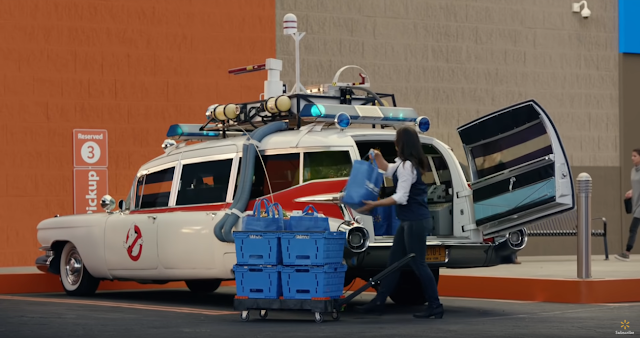 Walmart's latest advertising campaign for its pickup service features "famous cars," mostly from '80s/'90s movies and television. I first noticed the 30 second ad on Twitter and was immediately sucked into a world where the Ghostbusters, Batman, Knight Rider, and Jurassic Park all existed together. Sounds like a sci-fi nerd's favorite dream, right?!

What I didn't know until today (thanks to my bud Wyatt) is that there is a 90 second version of the ad that adds many more vehicles! The "Shaggin' Wagon" from Dumb and Dumber, the Flintstones mobile, the Wagon Queen Family Truckster from National Lampoon's Vacation, and the Mystery Machine all make appearances in the longer version of the commercial. There is also some funny dialogue with the customers and K.I.T.T. as well as an extended scene with Slimer and the Wal-Mart employee.

It's hard to know where to focus, even with a larger-than-life transforming Bumblebee walking off with a bag of groceries at the end. There is even a little Easter egg! For those that may not know the Sam Walton story (founder of Walmart,) a replica of his red 1979 Ford pickup is seen at the end of the video.

Check out the full 90-second commercial below and let me know what you think in the comments!