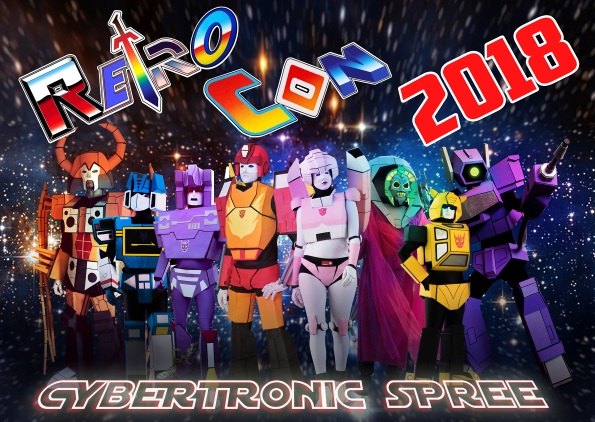 For the third consecutive year, Cybertronic Spree will be rocking Retro Con! Hotrod, Arcee, Rumble, Unicron, Soundwave, Bumblebee, Shockwave and Quintesson are back to perform music from The Transformers: The Movie, plus themes from hit films, cartoons, video games, and more. Their energon-fueled, '80s metal makes for an unforgettable live show!

New fans are discovering the “best kept secret” in bands as Cybertronic Spree's popularity continues to grow. The band’s new cover of Led Zepplin’s “Immigrant Song” (which you heard at last year's show) has over 850,000 views on Youtube!


We had the privilege of watching the Transformers tribute band in 2017 and it was one of the best concerts Wyatt and I had both ever witnessed. Cybertronic Spree will also be attending Retro Con early in the day on Saturday (September 14th) as convention guests, where fans can meet with them and purchase band-related merchandise. Tentative times are 10am to 1pm. But of course they will also be performing later Saturday night at 8pm at the nearby Arnold’s Family Fun Center. Ticket information coming soon so be sure to connect with Retro Con for details.

Retro Con 2019 is shaping up to be another awesome show with Gil Girard, Dan Gilvezan, and Melendy Britt already announced as guests! With Cybertronic Spree now returning, be prepared for an amazing show! To get you further excited, check out this short montage of songs we witnessed in 2017...