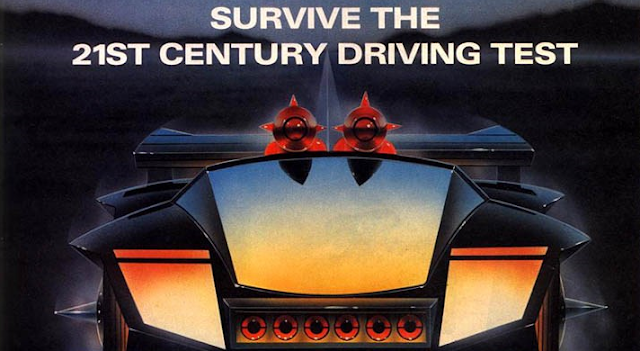 "...the year 2030. A time when the American highways are controlled by armed outlaws, and when danger lurks around every bend." While that sounds like the setting for a Mad Max film, it's actually the back story for the 1986 car-based role playing computer game AutoDuel.

While sifting through issue 70 of Computer and Video Games magazine on Archive.org, I stumbled across an ad depicting a futuristic looking car ready for battle. With a front end similar in style to the Lamborghini Countach and spikes protruding from its wheels, I simply could not look away. 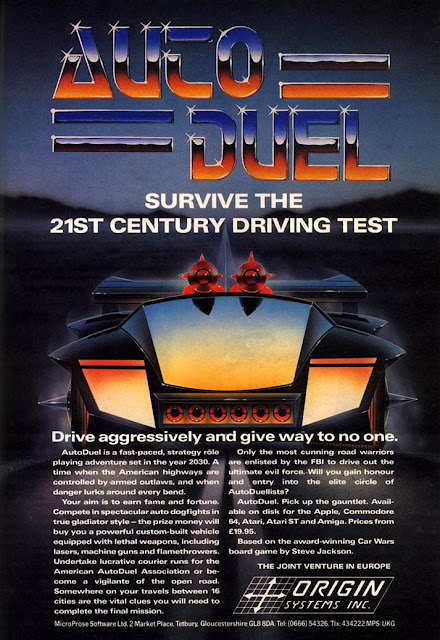 Developed by Microprose Software and published by Origin Systems, AutoDuel was derived from Steve Jackson's role-playing board game Car Wars that was first published in 1980. While it used elements of role-playing, AutoDuel also featured driving and action-based combat. According to MobyGames, "the game's progression is fairly open-ended: the player is free to visit different cities, explore highways, participate in car Arena battles to earn money, take on gangsters in the wilderness, salvage car parts, etc." Players could also embark on courier-type missions and customize their own cars with various body styles and weapons.

What is interesting about the AutoDuel magazine advertisement is it seems to be unique to any other visuals associated with the computer game. The cover art by Denis Loubet is a driver inside the cockpit of a car with two futuristic cars doing battle in the foreground. The back cover art and title screen on most platforms showed a similar background of a desert highway scene which is commonly attributed nowadays to "retrowave" culture and music. But my research couldn't find the weaponized car any other place but in the magazine advertisement. 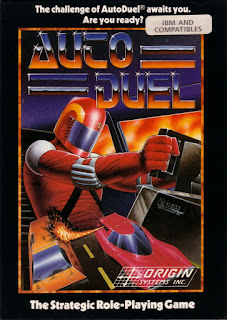 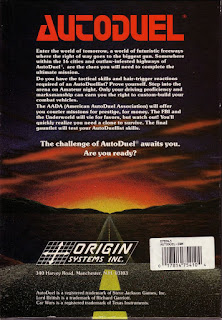 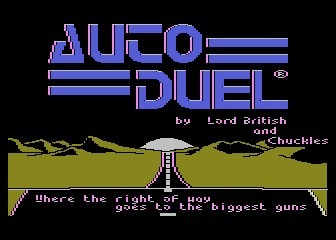 I reached out to the cover artist Denis Loubet to see if he also did the magazine ad and he had this response:

Wow! Great find! I don't think I ever saw that ad! I know I didn't do the car, but I think I did do the chrome-letter title art! I did that title with acrylics on clear acetate to for the cover to 'AutoDuel,' but it looks like it was used for subsequent advertising as well. Uncharacteristically, they seem to have gotten someone good to do the car illustration! I love the sky reflected in the windows and headlights.

While I haven't discovered yet who created the ad, I appreciate Denis' insight and response. If you have any information into who created the ad or just want to leave your thoughts, please leave a comment! For more about the gameplay of AutoDuel, watch the Lost Sectors walkthrough on YouTube.

Rad Ads explores the art of advertising in print media from the '80s.
Click here for more entries in the Rad Ads archive.