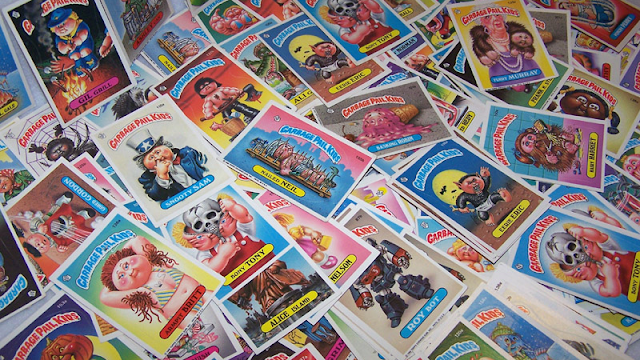 Starting as a parody, the famous Garbage Pail Kids were a priceless possession for people who grew up collecting them. They were an imitation of the popular Cabbage Patch Kids franchise, but these cards used childlike characters in unfriendly situations.

Garbage Pail Kids were the brainchild of Art Speilgelman who worked at the Topps company on trading cards sets like Wacky Packages. Together with Mark Newgarden, they developed and drew the characters that would become one of the most recognizable trading card sets of all time. Over 600 different characters (over 1,200 cards in all) were developed in the three short years from 1985-88.

Each Garbage Pail Kids character had a card with two different identities and typically, the only difference was just the name. John Pound was the artists for the front side of the cards while Tom Bunk drew the puzzles and murals that were formed with the back of the cards. The valuable cards can be worth a small fortune nowadays in mint condition and properly graded.

Though their popularity dwindled by the late ’80s, the iconic creations are still heralded by those who remember collection them as kids and have continued on in recent years with new sets and products. Comic books, Funko POP! vinyl figures, and more recently Garbage Pail Kids Monopoly have been produced based on the classic characters.

But it's the original sticker cards that remain the most collectible items in Garbage Pail Kids history. Here is a list of just seven of the cards that are now grossly valuable. 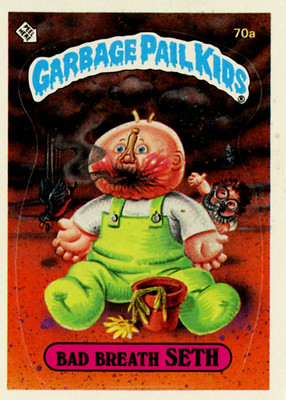 Bad Breath Seth (or Foul Phil) was number 70a/b in the original second series. The character was a baby exhaling smoke while he fondled with a dead flower next to his lap. Behind Seth, another kid could be seen wearing a gas mask and a bird plummeted from the sky. In the Garbage Pail Kids movie, Foul Phil asks several adults if they are his parents while trying not make them unconscious with his foul breath making. Director Rod Amateau's daughter Chloe voiced Foul Phil in the movie. The card can fetch you $200 in gem mint graded condition. 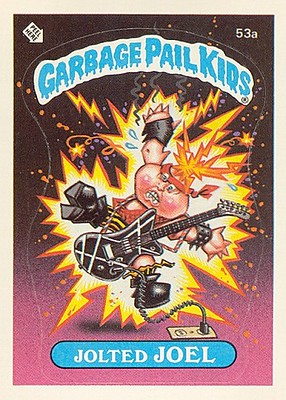 Jolted Joel, also known as Live Mike, was number 53a/b in the original Series 2. The picture illustration shows a rock band musician playing an electric guitar, which has been plugged into an electrical socket. It also depicts Jolted Joel being electrocuted live while playing the guitar. He would appear as Live Mike with Stormy Heather on opposite sides of a school folder back in 1986. This card can go for $400 in gem mint graded condition. 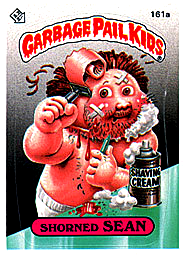 Shorned Sean, also known as Hy Gene, was number 161a/b in the original fourth series. The card depicts the Garbage Pail kid trying to shave his face with his skin peeling back from the razor. on the table like a shaving cream that has poured over. He also has bandages on his face like from previous shaving attempts and blood dripping from the open wound. Shorned Sean can fetch you $300 in gem mint graded condition. 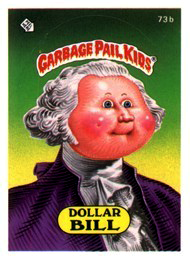 Also famously known as Dollar Bill, Gorgeous George had a number 73a/b in the original Series 2. The illustration was a modern replication of US President George Washington. The names were an indirect reference to a former wrestler Gorgeous George and Washington as the face of the $1 bill. The pill shape for the name plate was unique to the series. 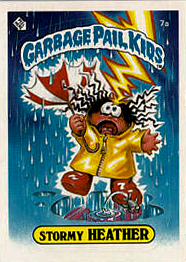 Stormy Heather was also known as April Showers and appears in original Series 1 number 7a/b. The picture is an illustration of a young girl getting electrocuted during a rain storm when lightning strikes her directly on the head, missing her umbrella. She is visibly scared, with a yellow dress and red boots, eyes wide open. The card can go for $800 in gem mint graded condition. 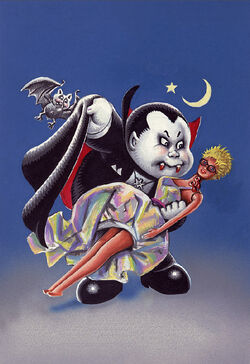 Alternately known as Evil Eddie, Nasty Nick was number 1a/b in the original Garbage Pail Kid series. The picture on the card shows a vampire kid with a Barbie in his hand. His fang shaped teeth are blood-stained from biting the doll's neck. A bat is also in the background with the light of the moon and star illuminating the environment. The card is a representation of how the vampire myths are rampant. The first name is a reference to having "a nasty nick," while the second name references an "eddy", the move for which a vampire turned into a bat. The card can fetch a high figure of $2,350 in gem mint graded condition. 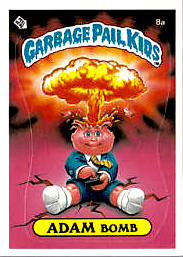 Adam Bomb also has the name Blasted Billy and appears in original Series 1 number 8a/b. The picture illustration shows a young bald boy with blue eyes and wearing a blue suit. With the mysterious smile on his face, he holds a detonator in one hand and presses the button with the other hand. As a result, an explosion shoots from his head in a fiery mushroom cloud. The character appears on a wrapper for the first five parts of the Garbage Pail Kids series. The card has an amazing value of $12,000 in gem mint graded condition.

In 1986, there was huge controversy and even a lawsuit from Original Appalachian Artworks, Inc. (who owned Cabbage Patch Kids) which resulted in a settlement for Topps to redesign elements of the characters if they wanted to continue production. Changes were made which are still in place to this day. The controversy came from parents who were outraged by the designs and eventually led to the cards being banned in schools and the cancellation the Garbage Pail Kids animated series before the first episode could be shown on broadcast television.

Despite the troubles, Garbage Pail Kids sticker cards still have avid collectors to this day. If you are looking to sell your cards, you can sell them online or butter yet, start collecting them all over again!