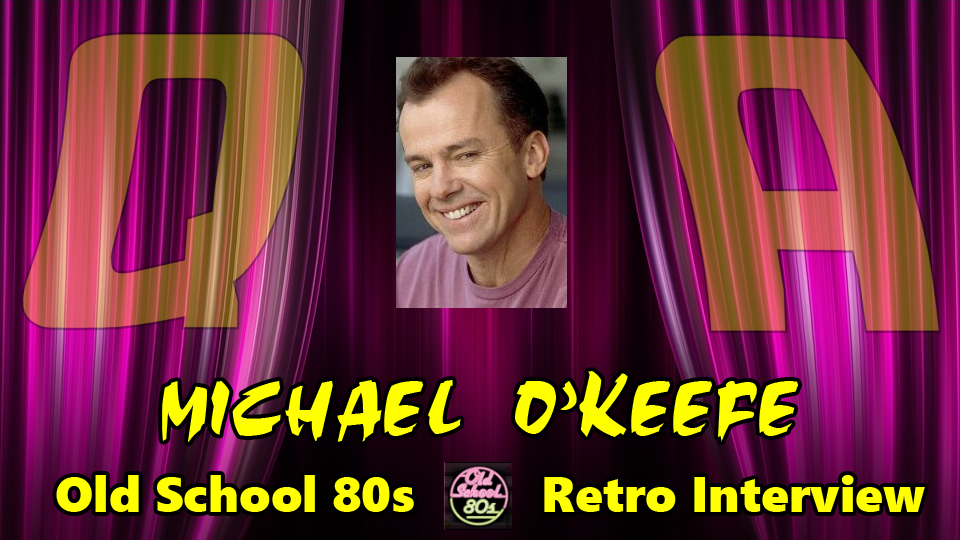 (This interview was originally published May 20, 2012 on the now-retired Kickin' it Old School blog. It is one installment in an incredible series of interviews we are republishing on Rediscover the '80s for posterity and your enjoyment. These are more than just interviews in a way; they are more like '80s timelines or oral histories on their respective subject matters. Please keep in mind the original date because some content could be specific to the time of the interview, though the majority should be timeless and totally rad.) 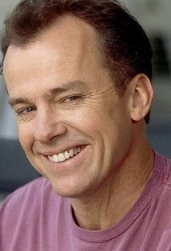 This time that awesomeness is Michael O’Keefe. He is probably best remembered as “Danny Noonan” in 1980’s Caddyshack which continues to be one of my favorite comedies of all time. Some might not remember that prior to that he received an Oscar nomination for his role as Robert Duvall’s son in 1979’s The Great Santini. O’Keefe has since worked steadily in film, television as well as stage taking on both comedy and drama in well over 100 roles and counting. Find out a little about him, making Caddyshack and more as we get on to some selections from my interview with Michael O’Keefe.

Q: When and how did you get your start in acting? Did you ever have any formal acting training? When did you think that it had the potential to become a career for you?

Michael: My parents bought a home in Larchmont, New York that the prior owners rented for commercial shoots. My mother was approached, accepted the offer, and the agent noticed several kids, me, and my brothers and sisters, all of whom he represented for commercials and print ads. All of my other siblings, except my brother Kevin, moved on, and Kevin and I continued acting. I trained at the American Academy of Dramatic Arts in their teen program, the Colonnades Theater Lab in the '70s, and am a member of the Actor’s Studio. I knew in high school I had a shot of making it as an actor and I took it.


O’Keefe did make his acting debut in a 1970 television commercial for Colgate. He then made his television debut in 1974 and had several roles prior to his first feature film including M*A*S*H and The Waltons among others. He made his feature film debut in 1978’s Gray Lady Down which starred Charlton Heston and also marked the film debut of Christopher Reeve.

Q: I would be remiss if I did not ask about your Oscar-nominated role in 1979’s The Great Santini. What do you remember about going through all of the Academy Awards hoopla and all of that positive attention? What can you tell us about your experience working with Robert Duvall? 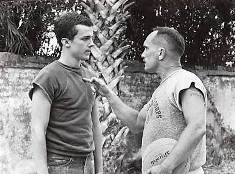 Michael: Duvall, was then, and is now, a genius and had a profound influence on me. Academy Awards are something of a blur but I do remember my mother coming and buying a gown the day before in Beverly Hills, which my girlfriend at the time, Laurie Prange, helped her with. That was fun!


The Great Santini was released in late October of 1979 so that’s close enough to include in the '80s for me. The film stars Robert Duvall in the title role and O’Keefe as his son “Ben Meechum”. Impressively, both Duvall and O’Keefe received Academy Award nominations for Best Actor in a Leading Role and Supporting Role respectively. O’Keefe lost out to Timothy Hutton for Ordinary People, but it certainly allowed people to take notice. Here is a memorable scene from The Great Santini when father and son are playing basketball…


Q: How did the role of “Danny Noonan” in Caddyshack come your way? What do you remember about the audition process? You seemed like one of the only characters who could really swing a golf club, did that play any role in you getting the part? 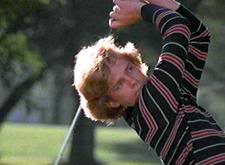 Michael: I was definitely the only one who could hit a ball in that film, although Bill Murray, who didn’t really play in the film, is a far better golfer than me. I got the audition, met with Doug Kenney and Harold Ramis a couple of times, and they gave me the gig. Amazing. 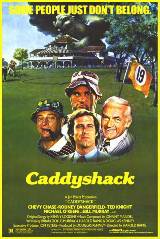 Caddyshack was released in late July of 1980 to mixed reviews and moderate success. But over the years it has gained an increased following and is now considered a cult classic. I consider it one of the funniest movies ever made and I am certainly not alone in that opinion. It was directed by Harold Ramis and co-written by Ramis along with Doug Kenney and Brian Doyle-Murray.

The film was shot over 11 weeks during the autumn of 1979 and starred Chevy Chase, Ted Knight, Rodney Dangerfield, Bill Murray as well as Michael O’Keefe. O’Keefe plays caddy “Danny Noonan” who is trying to earn enough money so that he can go to college and ends up facing some women problems and rising to the pressure of a high stakes golf match. Here is the original trailer for Caddyshack…


Q: I read that most of the cast and crew stayed at the same motel during filming and there were some great parties there. Did the cast become close at all during filming?

Michael: We did spend a great deal of time off camera together and because we were in a small town we mainly partied with each other.


Q: You had some great scenes with Chevy Chase. What can you tell us about Chevy and your experience working with him in that film? 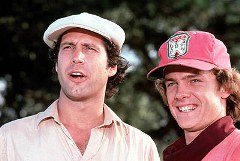 Michael: I was a huge 'SNL' fan and had seen Chevy in Lemmings, off Broadway in the Village, in which he played several parts in the Woodstock satire. It was cool to meet him and work with him.


Chevy Chase plays “Ty Webb” who is an eccentric free-spirited playboy who inherited his wealth from his father who was one of the country club’s co-founders. O’Keefe and Chase have several scenes together including this one where “Ty” imparts a little of his wisdom to young “Danny”…


Q: You also had some great scenes with the late Ted Knight. What can you tell us about Knight and your experience working with him? 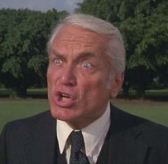 Michael: Ted was delightful. I had been a huge Mary Tyler Moore fan and was chuffed to work with Ted.


Ted Knight is perfect as “Judge Smails”. He has so many classic quotable lines in the film. Knight and O’Keefe also have several scenes together including this one which takes place after “Danny” was caught with the Judge’s niece…


Q: I read a story that you made the cast and crew present on the closed set for your love-making scene with “Lacey” remove their shirts to help make Cindy Morgan feel more comfortable. Can you confirm that story? 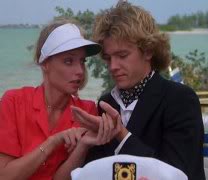 Michael: That’s true. She obviously looked a lot better topless than most of the crew, except maybe our boom operator who was a pretty hot girl.


Q: There was animosity between your characters, but was there any real animosity or tension between you and Scott Colomby (who played “D’Annunzio”) during filming?

Michael: No way. Love him! We had worked together before on a TV show called 'Sons and Daughters' [in 1974]. 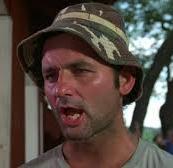 Q: I read somewhere that Bill Murray was only there 6 days to film his hilarious scenes. What do you think of his “Carl” character that he created in that short period of time?

Michael: Ten days, I think, was more like it. Bill made the film with his improvs as Carl. Unique and hilarious to this day.


Q: What can you tell us about Harold Ramis and your experience working with and being directed by him? 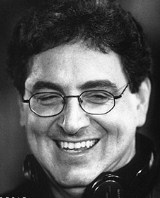 Michael: Harold was affable, charming, and the perfect guy to wrangle Chevy, Bill, Ted, and Rodney, which was like herding cats.


Q: What are some of your best memories from making Caddyshack?

Michael: Anybody who tells you they remember the filming of Caddyshack wasn’t there (as David Crosby once said of the '60s).


Q: Could you have ever imagined that Caddyshack would become the cult favorite it has? 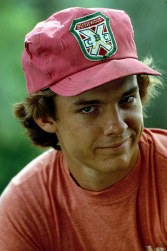 Michael: Nobody thought that and none of the critics liked it. So, when it finally took off we were all amazed.


Q: What are your feelings about the Caddyshack now over 30 years later?

Michael: Caddyshack is a big part of my career and I was grateful for the shot.


Q: Did you or do you keep in touch with any of the cast or crew members from the film?


Q: As far as you know, were you ever asked or considered to be in the Caddyshack sequel?


Q: How often do people come up to you and quote lines from Caddyshack? Do friends still yell “Noonan” at you while you are trying to sink a putt?

Michael: Too often. And yes, the “Noonan” jinx is still pulled on me. 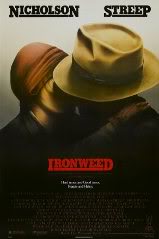 Q: You’ve worked twice with Jack Nicholson and in 1987’s Ironweed you even played his son. What can you tell us about Nicholson and your experiences working with him?

Michael: One of my acting heroes. Still can’t believe I got to work with him twice. Quite a gift.


Ironweed was released in late 1987 and starred the incomparable Meryl Streep and Jack Nicholson who both received Oscar nominations for their parts. O’Keefe plays “Billy Phelan” who is the son of Nicholson’s character. O’Keefe would later work with Nicholson again in 2001’s The Pledge which was directed by Sean Penn. 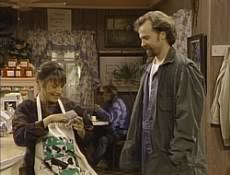 Q: Many also remember you from your time on Roseanne in the mid-90s. What are your memories of your time on that show? What can you tell us about working with that very talented cast?

Michael: Laurie [Metcalf] is a genius and a great stage actor. John Goodman had always been a friend and it was a thrill to work with him. And Roseanne… wow.

Q: What are your some of your proudest professional accomplishments?

Michael: Hmm. My answer is: I’m thrilled that I never ended up in rehab, needed rehab (See Charlie Sheen) or did something so embarrassing that it ended up in the tabloids.


Q: You have some films to be released this year. What can you tell us about those? Apartment 143? Junction? A Thousand Cuts?

Michael: One’s spooky, the other is rough and tumble, and the third is a poignant story about the loss of a daughter. They’re all different and, hopefully, worth seeing. 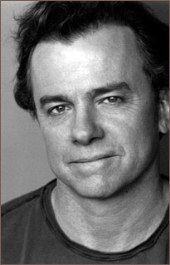 Q: You have become a practicing Zen Buddhist. When and how did you get into that and what about it connects with you so well? What is The Peacemaker Circle?

Michael: I loved reading about Zen as a teenager and just naturally fell into it in my thirties. It’s a great practice for actors and writers because it’s about being “present”. The Peacemakers are the brainchild of teacher Bernie Glassman. We bring Zen out of the Zendo and into the world.


Q: What else has Michael O’Keefe been up to more recently?


I am very happy that Michael was able to take some time to answer my questions so I could share them with you here. You can keep up with him even more at his official MichaelOkeefe.com website. I want to take this opportunity to again thank Michael O’Keefe for his contributions to '80s pop culture especially for his role in Caddyshack and, even more, for taking a walk down memory lane with us here for a little while as well. Noonan!