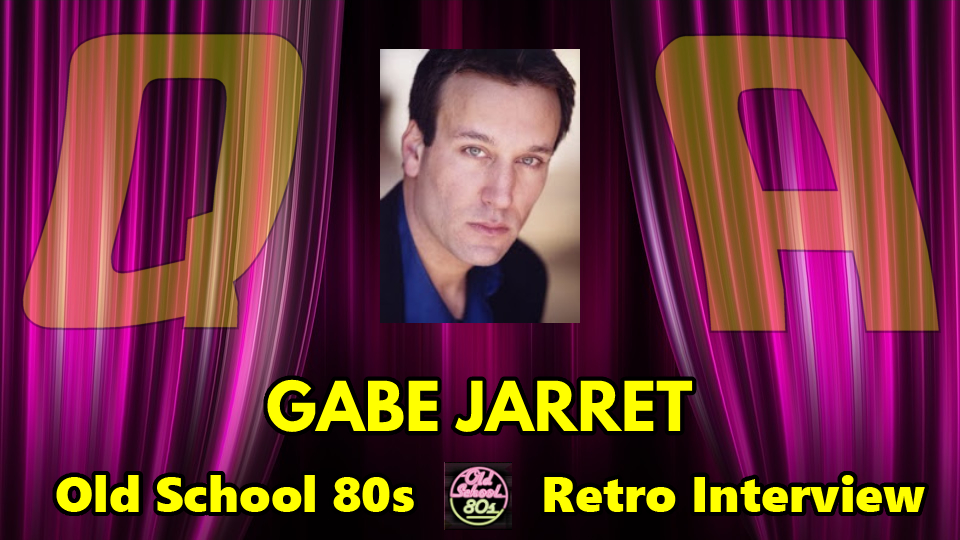 (This interview was originally published November 28, 2010 on the now-retired Kickin' it Old School blog. It is one installment in an incredible series of interviews we are republishing on Rediscover the '80s for posterity and your enjoyment. These are more than just interviews in a way; they are more like '80s timelines or oral histories on their respective subject matters. Please keep in mind the original date because some content could be specific to the time of the interview, though the majority should be timeless and totally rad.)

When the opportunity presents itself to ask a few questions to someone who contributed to the awesomeness of the '80s, I want to share those answers with you right here. Again, lucky for me (and hopefully you), I do get to share a little more awesomeness with you.This time that awesomeness is Gabe Jarret. I am pleased to have had the chance to interview one of the stars of the 1985 film Real Genius which just so happens to be one of my favorite teen comedies of all time. He played “Mitch Taylor” who was a boy genius going off to college at just the age of 15 to work on what ends up being a top secret military project. He is paired with another genius, senior “Chris Knight” played brilliantly by Val Kilmer, who teaches him that there is more to life than work. Here is the trailer for Real Genius (though this one does not show Jarret very much)… 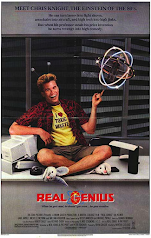 It was directed by Martha Coolidge and produced by Brian Grazer.
Val Kilmer was definitely the star, but the rest of the cast is outstanding too and this certainly goes for Jarret. After this success, it would be expected that Jarret would go on to star in other '80s teen films, but this would surprisingly not be the case. Jarret would go on to have some relatively minor television and film roles and has continued to work regularly ever since he was 11 years old. Even if he didn’t, it would not change the fact that at least he starred in one of my favorite comedies of all time. With that said, let’s get on to some selections from my interview with Gabe Jarret…

Q: 1985’s Real Genius was your first big movie role. How did the opportunity to play “Mitch Taylor” come your way? 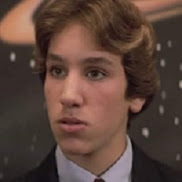 Gabe: They originally cast an actual genius, but he couldn’t act. Then they did a bi-coastal search and saw over 4,000 kids. I was screen tested after being sent in by my agent and won the part.

Q: So many “teen” movies use actors who are much older often in their late 20s or even early 30s. You were truly only 15 years old when Real Genius came out! You were playing a 15-year-old in the film. How did your age and/or experience affect your performance and experience on the film? Was the cast close during filming? 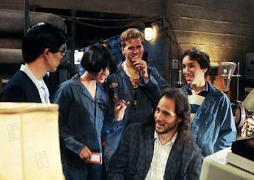 Gabe: I was the class clown, so a natural ham. The cast was not close. A lot of jockeying for power. Everyone was civil, but not close.

Q: Martha Coolidge directed the film (also directed 1983’s Valley Girl). How was your experience working for her?

Gabe: She was very nice to me and obviously did a fantastic job.

I had the privilege of an interview with Martha Coolidge and here is what she had to say about Gabe Jarret: 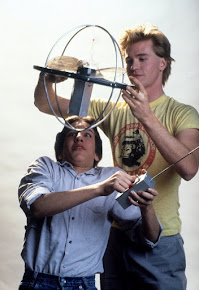 We spent an enormous amount of time looking for an actor for the young genius. Originally, we were seriously considering hiring a true young genius that had graduated college at (I think) 14 and was starting law school. We found Gabe late in pre-production. In the end, Gabe had the right combination of seriousness, gawkiness, intelligence and emotion that we needed. He studied with an acting teacher I brought in to help him with some of the more difficult emotional moments of the part. Working with young people like Gabe is a really refreshing experience because they do bring you back to the basic joy of acting and making movies. His naked honesty was a great contrast to Val's complex shenanigans.

Q: Val Kilmer co-starred with you as “Chris Knight” in just his second film role (after 1984’s Top Secret) though he was 26 years old. How was your experience working with Kilmer? 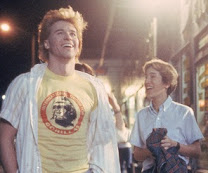 Gabe: As far as working with Val goes, his star was rising and my experience with him was the same as others at the time. Val was very focused on Val. We got along fine, but I always got the feeling that he didn’t want to share the screen with a 15-year-old punk. In my opinion, Val is a brilliant actor and should be a much bigger star than he is today. People tell me that he has mellowed out over his career, to his credit.

Q: Kilmer’s delivery of that great dialogue was so hilarious; did you ever just lose it and crack up during filming scenes with him?

Gabe: I didn’t really crack up all that much. Remember, it was my first film. I knew my job was to react in the moment.

Here is a scene which demonstrates well the spirit of Real Genius. This is also the scene where “Mitch” meets “Jordan” for the first time…

Q: I loved Michelle Meyrink in all of her '80s roles and “Jordan” is certainly no exception. Your nonverbals were always outstanding during your scenes with her when she was talking 100 mph and bouncing all over. Was it tough having a “love interest” at your age especially when she was about 8 years older than you? 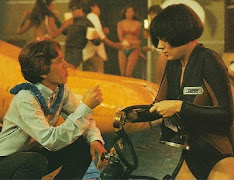 Gabe: You have no idea. The kiss you saw on film with Michelle was just the second girl I had ever kissed (not counting my Mom). The first was earlier in the film with Patty D’Arbanville [“Sherry Nugil” in the film] who was Don Johnson’s wife at the time. [Not bad for your first two kisses!]

Here is another funny scene with “Mitch” and “Jordan” interacting. She barges into the restroom while he is attempting to relieve himself. I love watching Jarret’s reactions…

Q: There is so much great dialogue in Real Genius. I start laughing just thinking of some of the great lines. Was there any ad-libbing/improvisation during any scenes that you remember? With the subject matter, there was a lot of technical jargon in some scenes. Was that particularly difficult to deliver and were there technical advisors to help make that as realistic as possible? 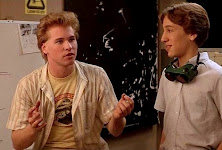 Gabe: Yes, we had technical advisors. The jargon was easy for me. But everything not jargon was fair game for improv.

Q: Robert Prescott has played such a good “jerk” in both Bachelor Party and in Real Genius. William Atherton also has played outstanding “jerk” roles in Ghostbusters, Die Hard and Real Genius. Their roles respectively as “Kent” and “Professor Hathaway” are critical to the success of the film, don’t you agree? They both play such outstanding tools onscreen, how were each of them off screen?

Gabe: I agree. And both of them were the dead opposite of their characters off screen. Fantastic actors and people, both of them.

Q: Everybody always remembers the great scene at the end when the popcorn destroys Hathaway’s house. It is reported that for that final scene, popcorn was popped continuously for 3 months in order to fill that house. What do you remember from the popcorn scene? 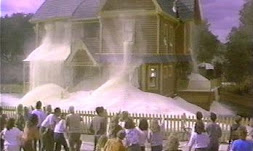 Gabe: The first company hired to pop the popcorn burned down during the preparation due to overuse of the machines. From there on, all of the popcorn was fire-proofed and inedible.

Q: Do you keep in touch with Val Kilmer, Michelle Meyrink, Martha Coolidge or anybody else from the Real Genius cast and crew?

Q: You had a small role in 1989’s The Karate Kid Part III as “Rudy”. If I am not mistaken, he is the “idiot” guy who gets punched in the face and his nose broken in the bar scene, correct? What memories do you have from working on that film? Were you a fan of the first two Karate Kid films?

Gabe: Yes, that was me. Good eye! During filming it was an 18 hour day and I had a 104 degree fever. I must have hit that wood floor 50 times. The next day the entire left side of my body was black and blue. Yes, I was a fan of the films and both Ralph and Pat made my life easier despite the fever and long work day.

Here is the scene from The Karate Kid Part III where Terry Silver pays Jarret's character to bring Daniel's killer instinct out...

Q: When I saw you in Apollo 13 (1995) and then again in Frost/Nixon (2008), I thought there must be some connection to Ron Howard, but then I realized that Brian Grazer actually produced Real Genius and that might be the real connection. Am I right about that or is it just a coincidence? How would you best describe working under the direction of Ron Howard?

Gabe: Believe it or not, it is just a coincidence that Brian produced all three movies. But it is no coincidence that Ron hired me again. Ron works with many actors repeatedly. If he feels you delivered on the performance he hired you for, he trusts you will do it again in another role you are right for.

Q: With your first hand experience (or the experience of those you’ve known/observed), what are the positives and negatives of being a child actor? How does being a successful child actor affect your ability to be a successful adult actor?

Gabe: That is a separate interview in itself. It is BOTH a blessing and a curse. When I say that the “bodies of the people I grew up with line the sides of the road I walk as an adult,” I mean it literally. Andrew Koenig, Dana Plato, River Phoenix, Corey Haim, Brad Renfro. And those are just the dead ones.

Q: Are there any '80s roles that you auditioned for and did not get that would be surprising or interesting especially looking back now?

Gabe: License to Drive (1988) and Dead Poets Society (1989) [I could have definitely seen Gabe as one of the characters being taught by Robin Williams at the Welton Academy] 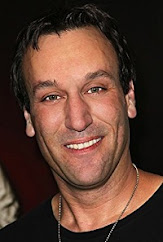 Q: Do you still get recognized as “Mitch” in public?

Gabe: Yes, I actually get recognized all the time.

Q: What has Gabe Jarret been up to lately?

Gabe: I just shot a TV pilot called The Fuzz and we are waiting to see if we get picked up.

I am so delighted that Gabe took the time to answer my questions so I could share them with you here. With his starring role in Real Genius, he not only helped make one of my favorite comedy films of all time, but also made a major contribution to '80s pop culture. If you haven’t seen Real Genius in a while (or ever), I suggest you watch it again and enjoy the greatness. I want to wish Gabe all the best and thank him again for taking a walk down '80s memory lane with us. I hope he gets another big break because he definitely deserves it. I would go as far as to say, “it’s a moral imperative.”