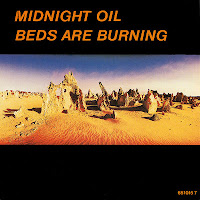 Midnight Oil cracked the top 20 on the US charts in 1987 for what would be the first and perhaps last time. The second single released from their Diesel and Dust album would peak at #17 and open the ears to a "burning" issue in their native Australia. "Beds Are Bruing" is written about the Pintupi, an Aboriginal tribe that was forcibly moved from their native land and traditional lifestyle beginning as early as the 1930s. The finally group known as the "Pintupi Nine" moved in 1984. To raise political awareness, Midnight Oil penned lyrics about giving back the land to the tribe. Over the last couple decades, the Pintupi have moved back and is now a thriving community of about 400 people.

Side A of the 12" record single featured the album version, along with two remixes. The "Kintore East Mix" comes in at just over 8 minutes, about doubling the length of the album version. The second remix called "Yuendumu Percapella Mix" is more of an a-capella version of the song. Side B featured two versions of the album track "The Dead Heart," which included the original and a long version that added about 1 minute in length. It also charted in the US, peaking at #53.