Baseball Movies in the 80s: Eight Men Out 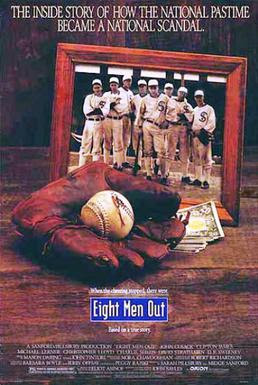 RD80s take:
There's another 80s baseball movie with Charlie Sheen, that often gets overlooked. Eight Men Out is a great baseball film about one of the most talked about stories in its history. I'd say that this period film is probably not for your average moviegoer, but for baseball fans, it's one that will grab your attention. It features a collection of some great young actors of its time, most insisting their desire to make the film was for their love of baseball. I really enjoy the movie and encourage baseball fans who may have never watched it to check it out.


Extended Plot:
In 1919, eight players of the Chicago White Sox are paid by a group of gamblers to fix the outcome of the World Series. The movie follows the players as they struggle with their decision. Some gladly go along with the decision like Sheen's character Happy Felsch and Eddie Ciotte (played by David Strathairn) who seeks financial gain and revenge against the White Sox owner. However, Buck Weaver (played by John Cusack) insists he wants nothing to do with the fix, but is included with the group anyway.

Ring Lardner: Sports writers of the world unite; you have nothing to lose but your bar privileges.

Hap Felsch: I may be dumb, fellas, but I ain't stupid.

Thanks to BoxOfficeMojo, IMDB, and Wikipedia