RD80s take:
As far as baseball movies go, it doesn't get much funnier than this gem from 1989. I watched it as a teenager (which was a little coarse for my young ears) and still revere it now as one of my favorite baseball movies of all time. With Sheen's antics, Berenger and Russo's love story, and Uecker's commentary, the worst team ever gives us some great laughs and even shows us a little heart. Here is of my favorite scenes is disbelieving pitcher Eddie Harris takes a swig of voodoo practitioner Pedro Cerrano's rum that is set aside for his god Jobu. Heading out onto the field, Harris catches some bad karma and a flying bat to the back of the head.

Jake Taylor: I play for the Indians.
Chaire Holloway: Here in Cleveland? I didn't know they still had a team!
Jake Taylor: Yup, we've got uniforms and everything, it's really great!


Harry Doyle: Just a reminder, fans, comin' up is our "Die-hard Night" here at the stadium. Free admission to anyone who was actually alive the last time the Indians won a pennant.

Harry Doyle: Heywood leads the league in most offensive categories, including nose hair. When this guy sneezes, he looks like a party favor. 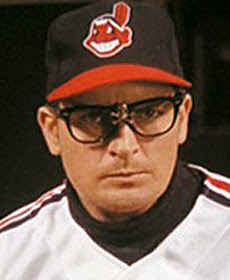 Harry Doyle: And Heywood crushes one towards South America!


Eddie Harris: Up your butt, Jobu.

Thanks to BoxOfficeMojo, IMDB, and Wikipedia
Newer
Older