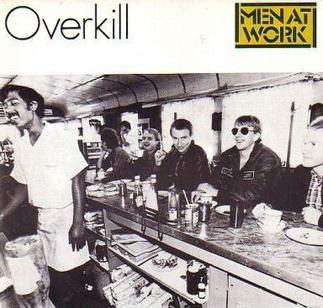 Men At Work's debut single from their second album was "Overkill." Fresh off a Grammy win for best new artist, they found themselves as a global act. Colin Hay is quoted as saying that it "was the first song I wrote where I thought I might make a living as a songwriter. It was a song about what was happening at the time, the experience we were going through of stepping into the unknown. It's about having a fear about that, but also knowing that what was going to happen was inevitable. Leaving behind where you are and stepping into something which is out of your control to some degree. That's what it felt like at the time." (AmIRight.Com)

The lyrics "ghosts appear and fade away" are used during the song and also at the end of the song. I person I know, who will remain nameless, misheard that lyric as "go stupid, and fade away." Apparently, Men At Work also had a considerable amount of hate according to this nameless person!

AmIRight.Com also list these misheard lyrics for the same line:


Day after day, I drink a beer
Night after night, my heartbeat shows the beer
Toast to beer and fade away.