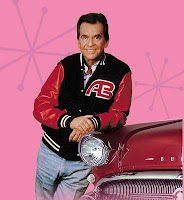 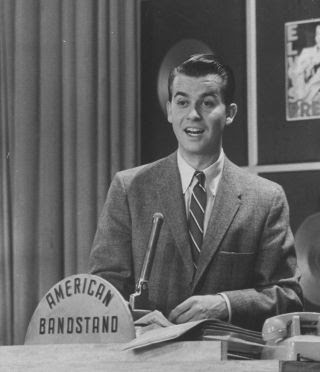 America has lost a television icon. Dick Clark, host of American Bandstand and many other television shows, died today at the age of 82. He was a true broadcasting legend, starting out his career in 1947 at AM radio station WRUN in Rome, NY as an office worker. By 1951, he was a disc jockey at WOLF in Syracuse, NY and also the host of country music television program at WKTV in Utica, NY. The next year he got his big break, moving near Philadelphia, PA and working for WFIL on the radio/TV station. He would guest host on a show called Bob Horn's Bandstand until 1956. He then took over the show as its permanent host, with the ABC TV network picking the show up for national broadcast and renaming it American Bandstand. The rest, as they say, is history.

Growing up in the 80s, I remember Dick Clark hosting numerous shows. American Bandstand at that time aired just on Saturdays, but was still influencing young minds like myself with rock and roll music. By the time the show ended in 1989, Clark had hosted over 3,000 episodes. As an avid fan of game shows, I also remember watching Clark on $25,000 Pyramid. He hosted the original version of the show in 1973 (then $10,000 Pyramid), but would return for its 1982-88 run after the show bounced around several networks. During Clark's final run as host, the game show would win 3 daytime Emmy awards. 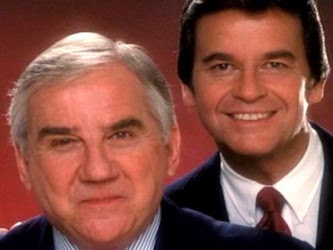 Another show I vividly remember watching with my dad was TV's Bloopers and Practical Jokes. Clark hosted the show with friend and former neighbor in Philadelphia, Ed McMahon from 1984-86. They were both hosting specials around bloopers and commercials in the early 80s and NBC decided to combine their high-rated shows. A precursor to shows like Punk'd and Most Outrageous Moments, the comedy reality show revolved around playing practical jokes on celebrities with hidden cameras and bloopers from hit television shows. Mixed into the show were stand-up comedy acts, which featured Jerry Seinfeld, and those famous animated custodians, featured in between video clips.

In true American Bandstand style, Clark helped us ring in the new year with great music for 40 years. New Year's Rockin' Eve is the annual tradition that was hosted by Clark from 1974-2012. Clark produced two specials in '73 & '74 before beginning as host the following year. With New York City's Time Square as the backdrop, Clark invited musical guests to perform leading up to the ball drop. The 2005 show was the only one that he missed due to a stroke he suffered a few months prior. Regis Philbin stepped in as a guest host. The next year, Ryan Seacrest took over most of the hosting duties, with Clark having a limited role.

Clark received many awards over his career, including four Emmys, a Peabody award, and a spot in the National Radio Hall of Fame, Hollywood Walk of Fame, and the Rock and Roll Hall of Fame. Up until this month, Clark wrote for his DickClarkOnline.Com blog. His final entry was April 9, 2012 as follows:

"THE SOUNDS OF SILENCE"

We are constantly surrounded by sound. In a modern world, we are exposed to millions and millions of sounds, both pleasant and unpleasant, on a daily basis. Sometimes it seems enough to drive a person mad, so when I read an article last week about the quietest place on earth, I became intrigued.

In South Minneapolis, Minnesota, there is an anechoic chamber at Orfield Laboratories that can mute out 99.99% of all sound. "The Guinness Book of World Records" has listed the studio as the quietest place on earth. Companies from all over the world use the chamber to test the noise of their products. From Harley Davidson to Whirlpool, they have been able to test noise without any outside sound interference. Even NASA has used the chamber to help astronauts train for the silence of space.

Silence may not, however, be as golden as we have been led to believe. Complete depravation of sound does not make us calm and serene. In fact, it is the complete opposite. Subjects report at first they become aware of their own breathing, then the beating of their heart. The noisy sounds of the human body are usually drowned out by the ambient noise that envelops us on a daily basis. In the absence of sound, our ears, which are so used to searching for sound, will focus on the sounds of the body. Then the brain will create sound to fill the void, so deep in that anechoic chamber, alone with only our own sounds, hallucinations will begin. This lack of sound is so disturbing that the longest anyone has been able to stay in the chamber is only 45 minutes!

So remember, just when you think all the sounds of dogs barking, people mowing their lawns and children screaming are driving you mad, they may just be keeping you sane!

Today, Wednesday April 18 2012, we hear silence. No Rock 'n' Roll music. No ticking clocks or buzzers. No laughter. No party horns. But we remember the "noise" that Dick Clark gave us to help us keep our sanity. Thanks, Dick...as was your custom, we salute you and bid you "so long."'
R.I.P. Dick Clark
Newer
Older