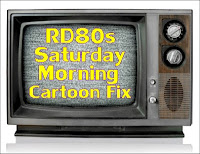 If there is one thing that I miss most about growing up in the 80s, it would have to be watching Saturday morning cartoons! There was nothing like pouring yourself a bowl of your favorite cereal and getting up early to watch great cartoon shows. So why can't we relive a little of that now? Thanks to Youtube, we can watch full episodes of those great 80s animated shows (some of which are not yet available on DVD.) So, come rediscover your forgotten Saturday morning cartoons with RD80s Saturday Morning Cartoon Fix! This week's feature cartoon is Turbo Teen!

Do you ever remember dreaming about being a Transformer as a kid? I know I did and that's why the 1984 cartoon Turbo Teen was one that I watched. A victim of "being in the wrong place at the wrong time," Brett Matthews crashes his sports into a government laboratory one night during a thunderstorm. After being subject to a molecular laser beam, he becomes fused with his sports car and is able to morph into a car depending his exposure to extreme hot or cold. Brett uses his powers along with his friends to solve mysteries in true Scooby Doo style. Okay, so granted it wasn't the most believable plot, but for me it worked.

Turbo Teen ran in the 9:30am slot on ABC from the fall of 1984 through the spring of 1985. Only 13 episodes were produced and have never been formally released in the DVD era. You can read more about Turbo Teen in a post I did earlier this year. I was able to find one episode on Youtube (split into two parts) entitled "Dardevil Run." Enjoy the "incredible Turbo Teen" in this week's Saturday Morning Cartoon Fix! And since Halloween was just last week, I also found a Monster cereal commercial from 1984!