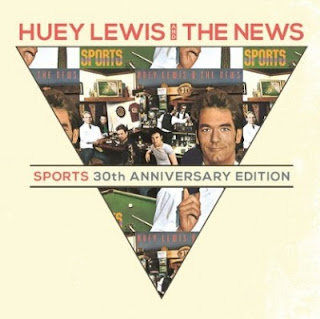 What a day to re-release an album! Not only is today my dad's birthday (Happy 70th!) but two great 80s albums are celebrating their anniversaries with re-releases! Today, R.E.M.'s celebrates the 25th anniversary of their album Green with a deluxe edition featuring a full set of live tracks from a 1989 concert. (Check out my previous blog post on the re-release.) ALSO, one of my favorite bands of the 80s Huey Lewis & The News is also celebrating today with the 30th anniversary re-release of their Sports album!

Once I was able to save up and buy my own music in the mid-late 80s, I remember acquiring Sports on cassette. I loved it. I also remember it still being one I listened to in the car when I first learned how to drive in the early 90s. It's one of those albums that I never used the fast forward button on (maybe rewind.) The only time I've seen Huey Lewis & The News live was in 1994 and still hold their performance of "I Want A New Drug" as one of my personal favorites. (Each member of the band exited one-by-one until only the saxophonist was all that was left.)

So why is Sports such an important album to the band and the '80s in general?
Try these stats:

The success of the Sports album launched Huey Lewis & the News to new heights. They would follow up by producing their first #1 single, "Power of Love" from the Back To The Future soundtrack. And then their pinnacle music success would come with their Fore! album in 1986, which produced two #1 singles and a total of five more top 10 singles.

Today, the landmark album gets a re-release with new live tracks for the 30th anniversary. According to the official announcement on their website::


Lewis has personally overseen an expanded commemorative edition to be released May 14th by Capitol/UMe. Digitally remastered for CD and standard and high definition digital audio, ‘Sports (30th Anniversary Edition)’ pairs each of the original album’s nine songs with choice live versions on a second disc, many of which have never before been released. The special edition includes an expanded booklet with photos and memorabilia from the band’s archive and new liner notes by music journalist and author Gary Graff. Says Huey, “We’ve always been very proud of the record and it’s going to be a blast to play it all live!”

And you'll get to hear the entire album live this summer as the band embarks on the Sports 30th Anniversary Tour across North America. Check the official website for tour dates and also catch them on TV this week including appearances today on ABC Live With Kelly and Michael and tonight on Jimmy Kimmel Live. The new 30th anniversary deluxe album is available to download now!