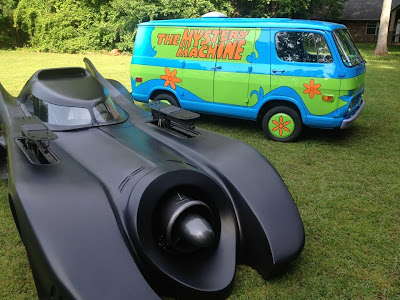 If there is one thing that really gets my engines roaring, it's Hollywood vehicles. In the 80s, there were whole TV shows and movies based around talking cars, jet-powered helicopters, and stainless steel time machines. Seeing them today in real life at conventions and car shows brings many smiles to those who remember them.

Well, there is one man in Newnan, Georgia that has not only collected many of these cars...he's built or refurbished them himself! Meet Jerry Patrick and AKAjunk (Also Known As Junk) Restoration which has transformed tattered and abused rides into some real head-turners!

As you can see, his labor of love gets noticed by kids and adults alike. According to a recent interview with WSB-TV, Patrick has custom built his 1989 Batmobile from the ground up...even with machines guns! Other vehicles showcased in the interview include The Mystery Machine, K.I.T.T. and Eleanor from Gone in Sixty Seconds. Watch the full story below...
A quick scan of Akajunk.com and the Akajunk Facebook page show some of his past projects. They include the General Lee, Crockett's Ferrari Spider from Miami Vice, and the gold eagle Trans Am from Smokey and the Bandit to name a few. As mentioned in the interview, new projects include the A-Team van and Mater from Cars.

Very nice collection! Just need an Ecto-1 and a DeLorean and I think I'd be set! What Hollywood cars would you want in your collection to take to conventions and car shows?
Newer
Older