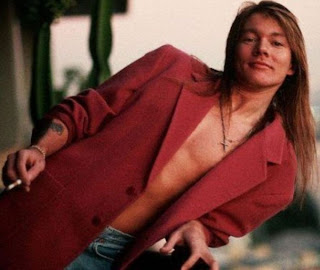 After watching many sites get into the GIF game over the past several months, I thought I'd give it a whirl. GIFs are, of course, short video clips or photos put in motion usually on continuous loop, hence the title "GIFs That Keep On Giving." Get it? Okay, maybe I've watched Christmas Vacation too many times (yeah, not possible.) Anyway, the idea hit me the other day while listening to the local rock station of who would make a good guinea pig.

Guns N' Roses made their debut on to MTV in the summer of '87. Was there anyone in America that didn't buy the Appetite For Destruction album that year? If there was, chances are they also didn't buy the "snake dance" performed by lead singer Axl Rose. He definitely had some unique moves, didn't he? Let's take a look at a few that I believe deserved the GIF treatment...

"Axl, there's a cockroach on stage! Squash it, quick!"

How considerate. Axl always made sure no one was behind him before breaking into the electric slide.

Favorite playground activity as a kid was definitely the monkey bars.
Newer
Older