A-Team At 30: The Best of Toys and Merchandise 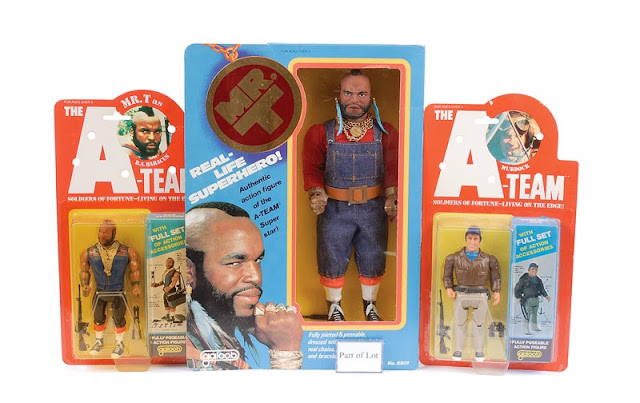 Like every other popular franchise in the '80s, The A-Team produced a massive amount of licensed toys and merchandise. If you could fit an image of Mr. T on it, the marketing companies were sure to take full advantage.

And who could blame them? The show was a little boys dream! I was 6 years old when the A-Team debuted and the merchandise would be a nice piece of my childhood collection pie. Some of my collection included B.A. and Murdock figures (still have the Murdock minus an arm. I figure he pushed B.A.'s button one too many times as some point.) I had a diecast van that was just a little smaller in scale to my figures. The van had a sliding door and I remember still craming the larger figures in the back. I also still have some puffy stickers as showcased previously in my 1984 sticker album.

There was so much to choose from but I thought I'd highlight some of the best collectibles that were available during the show's original run. (Click the images to view larger.) 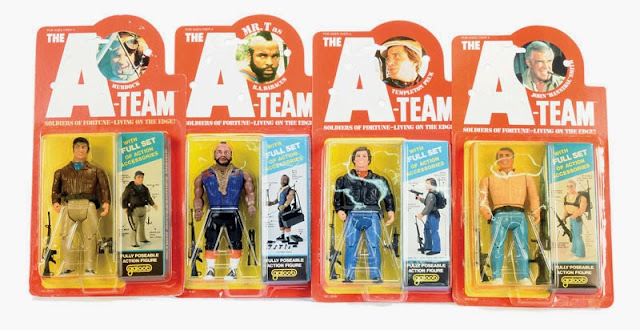 Galoob Action Figures: Galoob released several 5" figure sets and vehicles for the A-Team. They also released a "bad guy" team to oppose the well-known characters. If you were one of the lucky ones, you might have had the Command Center or Headquarters Camp playset. If you were a fan of Murdock, you might have had the A-Team Jet Bomber or Gyrocopter that came with a howing mad figure. Check out this awesome Galoob catalog with all the toys preserved by the PlaidStallions.com website.

Daisy Toy Guns: When playing The A-Team in an outside adventure, these toy guns with "realistic automatic machine gun sound" were coveted by every little boy. They also featured TV show accuracy too! 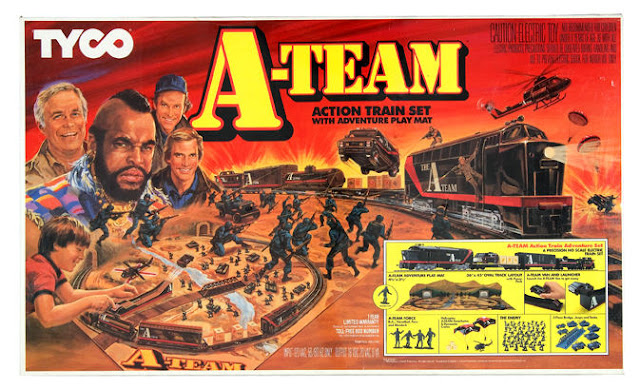 Tyco Action Train Set: Tyco released some great "action" train sets based on '80s properties. Besides the standard electric train set, it came with other vehicles, stand-up figures, and a play mat to act out the adventure. The A-Team set featured a launcher and ramp to perform some high-flying stunts with B.A.'s van. 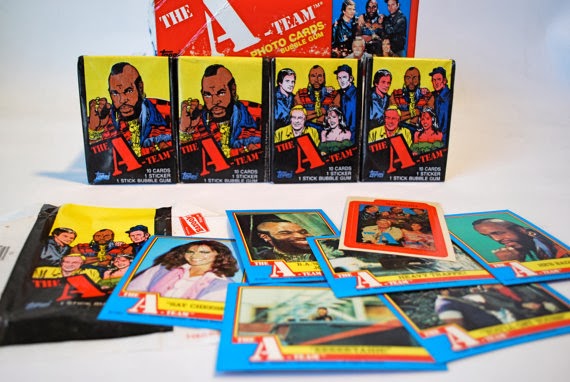 Topps Trading Card and Sticker Set: Topps Trading Co. released a 66 card and 12 sticker set in 1983 that captured media photos and screengrabs from the TV series. The sticker backs also featured a larger image when assembled.

Ertl Diecast Toy Vehicles: Diecast vehicles were just as popular in the '80s as they are today and Ertl did an awesome job with the A-Team. They made vehicles at the 1:64 scale or "Matchbox' size as well as monstrosities like Face's Corevette above. I believe the van I owned that I mentioned earlier was also made by Ertl.

Thermos Metal Lunchbox: What was great about metal lunch boxes in the 80s was the original art. The box above has an image that seems to come to life and want to stomp on the baloney sandwich of the kid sitting next to you. 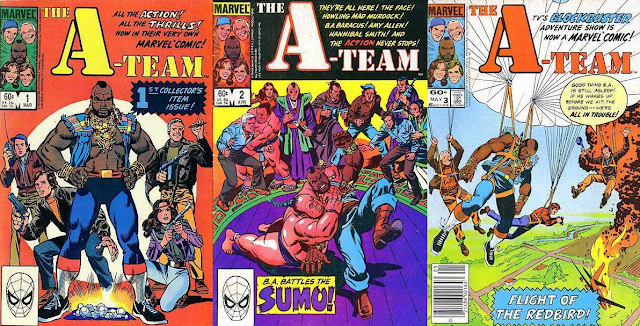 Marvel Comic Books: Marvel released the 3-issue set shown above in 1984. It seems that comics should have been the perfect stage for the ridiculousness (word?) of the A-Team universe, but only managed to produce these three issues. 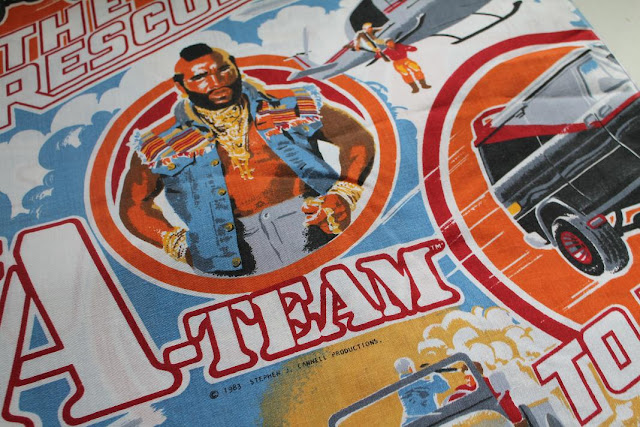 Bed Sheets: We all had theme bed sheets in the 80s and if you were lucky enough to own this set, I salute you.

Parker Brothers Board Game: The stage is set for The A-Team to retrieve a top secret soft drink formula that was stolen by a madman (adapted from the "Trouble Brewing" episode from season 3.) I've never owned or played the game so I'm not sure if it's as ridiculously awesome as I expect. 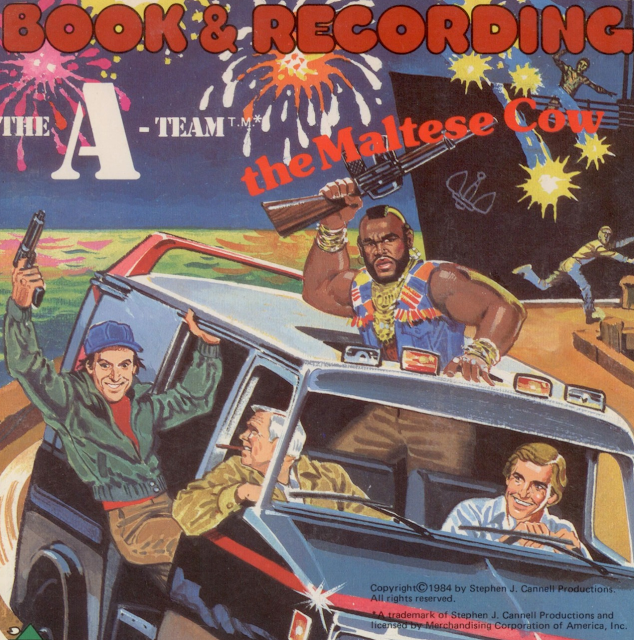 Book and Record Sets: Several sets were released from Peter Pan Records and Buana Vista/Disney. "The Maltese Cow" set shown above was apparently adapted from the episode of the same name. 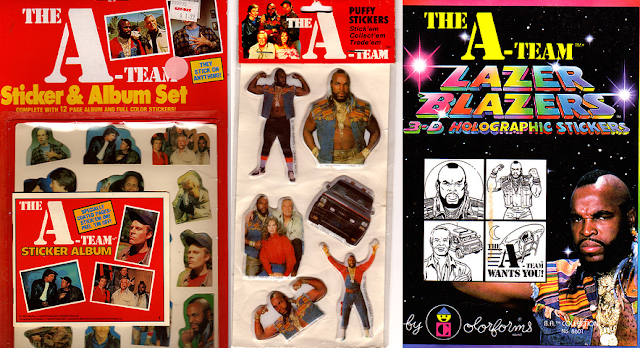 Stickers: The '80s was perhaps the best time to be a sticker collector. There were several kinds released including puffy stickers, Lazer Blazers, and an album/sticker set. Shawn over at Branded In The 80s did an awesome job of documenting A-Team stickers.

Remember owning some other A-Team toys or merchandise? Share in the comments!