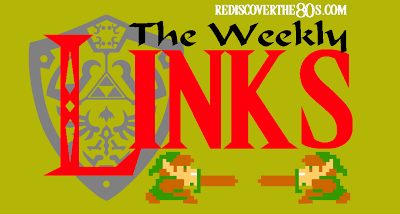 Hope everyone had a nice Thanksgiving! Here it is December and time to break out your VHS copy of the He-Man and She-Ra Christmas Special and your "Christmas In The Stars" LP album...okay, maybe that's just me. Actually, I do have VHS copy of the Simpsons first Christmas special aka "Simpsons Roasting on an Open Fire" from 1989. It was actually the very first episode of the show to air and I still watch it each year.

I'm looking forward to sharing some Christmas links and posts this month, so let's open up these early link presents before Santa finds out!

- Yeah, my wife would've laugh had I suggested a Donkey Kong or Super Mario cake.

"A Christmas Story" As Told By Someone Who's Never Seen It - Buzzfeed
- This article must be written by an 8 year old 'cause I didn't think it was possible for anyone NOT to see this classic Christmas movie. But for whoever wrote it, to try and piece together the movie just by pictures is pretty comical.

The most iconic 80s videos of all time - Canoe
- Yep, the gang's all here.

The Blues Brothers' mall car-chase scene, perfectly recreated in Lego - io9
- EASILY the video of the week for me. I'm a huge fan of the movie and I could watch this scene and the police chase at the end of the movie on continuous loop. God bless the people who took the time to LEGO-ize it...

Some of the most popular '80s music artists made announcements this week about new music!
Phil Collins Mulling a Musical Comeback - Rolling Stone

Watch an entire building transform into a playable Rubik's Cube - io9
- Amazing! This guy somehow hooks up a Rubik's cube model to lights on a building...and it's playable!

- Awesome job by Old School Tim to commemorate the 30th anniversary of the Thriller music video.

- By now, it's pretty well known that Michael Bay has take over the Teenage Mutant Ninja Turtle franchise. I loved the cartoon as a kid and I'm still not sure what to think about the new movie, but Cody at least instilled some hope to me in this article.

This Dog Dancing To 80s Music Is Actually Kind Of Amazing At It - Huff Post
- Here's a fun video to end the Weekly Links...a dog that can dance to an 80s track better than 50% of the people on this planet (including me.)
Newer
Older