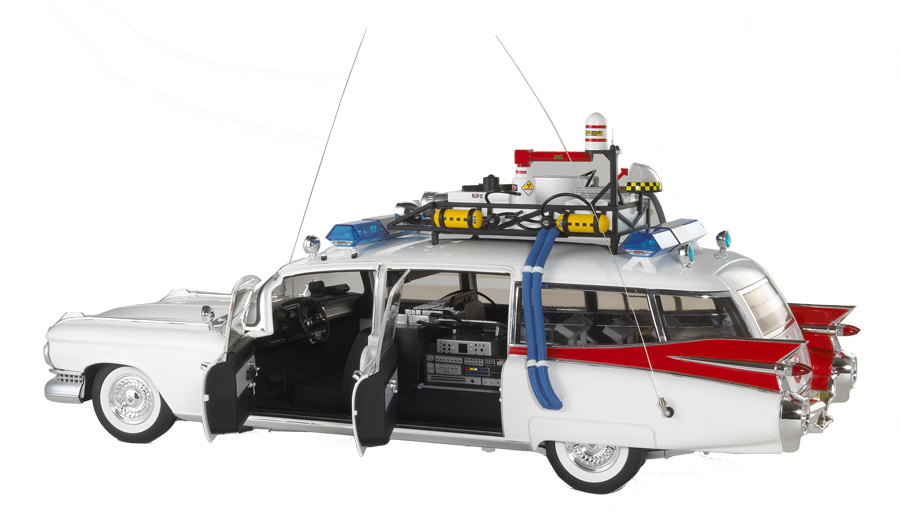 Hot Wheels and Matchbox cars have been a huge part of my toy collection since I was a kid in the '80s. Now with two pre-teen boys of my own now, die-cast car collecting has provided a common passion that we all can share together. Watching my boys play together with their cars and tracks frequently takes me back to when I played in my dirt driveway with neighborhood friends. 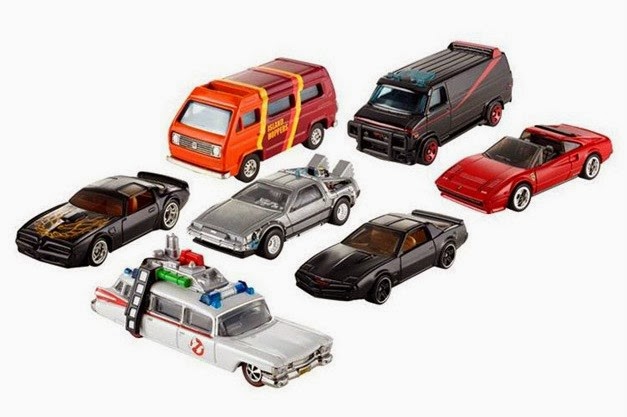 Over the past couple years, as I've graced the toy aisles with my boys, I've managed to start a small Hot Wheels collection again of my favorite Hollywood vehicles from the '80s. The normal 1:43 scale cars have featured the likes of Ecto-1, K.I.T.T., and B.A.'s van from The A-Team over the past several years. I've been lucky to find some in the stores and have also ventured on eBay to snag some I couldn't find. Also over the past couple years, Hot Wheels has offered a Retro Entertainment Series of vehicles from popular TV shows and movies. The premium cars have offered more detail and a wider variety of classics like T.C.'s helicopter from Magnum P.I. and the Ferraris of Miami Vice.

Just recently, I've discovered the upscale Hot Wheel Elite collection. This toyline is definitely worthy of being described by Robin Leach and included in your "champagne wishes and caviar dreams." This Elite series offers both the traditional 1:43 scale cars and larger 1:18 scale cars with awesome detail and features. With a price tag usually over $100 each, the large cars are truly elite and only for die-hard collectors. But the detail, features, and even packaging are unmatched from any toyline I've seen producing our '80s favorites. Let's take a glimpse at some of the cars from the Hot Wheel Elite collection and some soon to be released creations.

As you can see from the headline image, the only cars better than these 1:18 scale Ghostbusters Ecto 1 and Ecto 1A would be the real thing. The famous rides from Ghostbusters I & II feature four opening doors, a hood and trunk that opens (complete with gurney,) and fine details of the roof and interior Ghostbusting equipment. Also featured in the 1:43 scale collection.

Do you remember the large talking "Knight 2000 Voice Car" from the '80s that came with the Michael Knight figure? It's only equal might be this 1:18 scale K.I.T.T. that features pop-up headlights and an electronic flashing light for K.I.T.T. red cylon eye. Doors, hood, hatchback, and T top sunroof panels all open. And if that wasn't enough, how about a revolving license plate and passenger ejector seat! As much as I revere the '80s toy, this car makes me think that talking is overrated!! Now if the bad guys are more your thing, K.A.R.R. is also available with the same features. Also featured in the 1:43 scale collection.

Doc Brown would be proud of this 1:18 scale DeLorean Time Machine. Details from the gullwing doors to Mr. Fusion to the alarm clock on the dash are spot on with Back To The Future I and II (and a hoverboard for good measure.) Also featured in the 1:43 scale collection.

I pity the fool that doesn't appreciate this van! Details include the top sunroof, red-spoked wheels and working passengeer and rear doors (what, no sliding side door! A crying shame.) Also featured in the 1:43 scale collection including a new "mudsplattered" version that looks straight out of the show!

The 1989 Batmobile features excellent detail with gold trim. Features include a trunk to expose the jet engine and the must-have sliding cockpit canopy door to gain access to the controls. Also featured in the 1:43 scale collection.

Magnum P.I. fans will appreciate this Ferrari 308 GTS made famous in the first season of the show. In fact, Ferarri lovers in general need to check out the wide variety of 1:18 scale cars that Hot Wheels Elite has to offer.

Cameron's dad will have a fit if you take this car out of the box. The famous Ferrari 250 California from Ferris Bueler's Day Off features opening doors, as well as the hood and trunk.

Although not the 1986 model that Sonny Crockett drove in season 3 of Miami Vice, this 1984 Ferrari Testarossa will still make you want to remove your socks.

Hot Wheels Elite vehicles are limited edition and not easily found in stores. The preferred dealer in North America is SpeedGear.Com, but other dealers can be found around the world using the HWE store locator. You can also find the 1:18 and 1:43 scale vehicles on eBay and Amazon being sold by private collectors and dealers.

I invite everyone to follow Hot Wheels Elite on Twitter for the latest updates. One of the recent photos uploads teased us with a 30th anniversary Ecto-1 complete with figures!

On the HWE website, there are also "coming soon" slots for new a BTTF Time Machine (#3 edition?) and a new "K.I.T.T." (Super Pursuit Mode?) Can't wait to see these!