Children of the '80s had some great options when it came to where to buy their toys. For me, the top stores were KayBee Toys, Hills Department Store, and Toys 'R' Us. I grew up in a small town so shopping for toys at one of those three stores was a real treat because of the drive. I usually had to resort to local department stores like Ames or Kmart.

Toys 'R' Us commercials though were probably my biggest influence and primary trigger to ask my parents to spend some hard-earned cash on toys. When the "I don't want to grow up" jingle was heard, it was full attention mode to see what was new or on sale. Looking back on these TV ads now though is a little weird. Some of the marketing ploys are pretty clear and show "the sign of the times." Other TRU ads were just plain strange and didn't make sense.

Here are 10 things I learned while rediscovering several Toys 'R' Us commercials from the '80s: 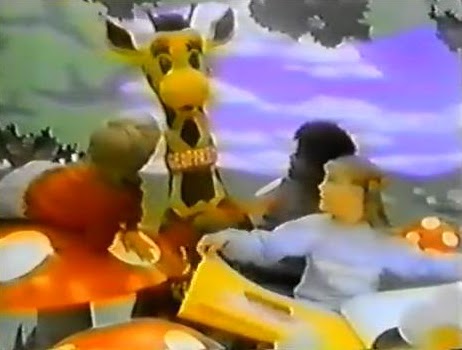 Geoffrey's home world is some kind of mix between Oz and Super Mario Brothers.
Several commercials featured mascot Geoffrey taking kids through a portal door to what we presume is his home world. In it, the kids lounge on large mushrooms and read oversized toy catalogs. And at the end of the ad, they shuffle down a yellow brick road that leads to a store. No offense Geoff, but unless you have life-sized G.I. Joe vehicles in your world, I think I'll pass.

Parents are some uncoordinated slobs that will trash your stuff and make you take your own ride to the store.
If you can decipher the intended message in the ad above, I'd love to hear it. We've got parents dressing like their kids, destroying toys, and acting like fools. Apparently, they are also making their kids pedal their own cars to the store with them literally collapsing when they get home. Must be what happens when parents listen to bad hip hop? 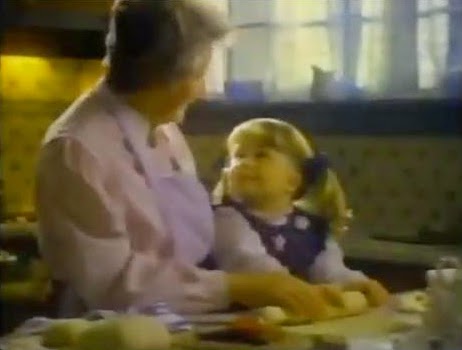 Be prepared to work in the kitchen if you want that Teddy Ruxpin.
"Okay Dear, today is your first day of summer break. If you want that talking bear for Christmas this year, you'll need to make twelve pumpkin pies a week for Grammy from now through the 3rd week of December."

Giraffes celebrate Christmas and will drive a convertible through a snow storm to do their shopping
You'd think giraffes would show a little more care for their calves (yes, I Googled what baby giraffes are called.) Driving with the top down in a snow storm with no seat belts (or snow treads) is just asking for a trip to the ER for Christmas if you ask me. 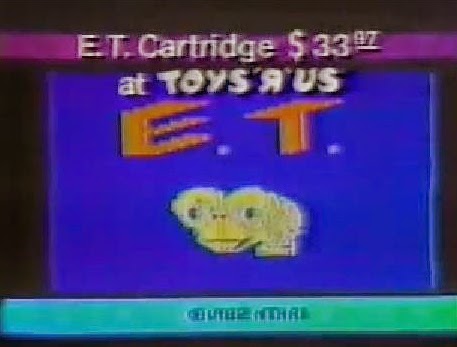 Toys 'R' Us deserves a little blame for the E.T. Landfill.
$34??!! You'd think after kids tried it out in the store and cartridges sat on the shelves that this ad probably got pulled off the air. I mean, I'm surprised my parents didn't have to take out a loan when they bought me my 2600 which was probably the $130 advertised price in this commercial. I'm almost certain if they had bought me E.T., I would've never got that Sega Master System years later. 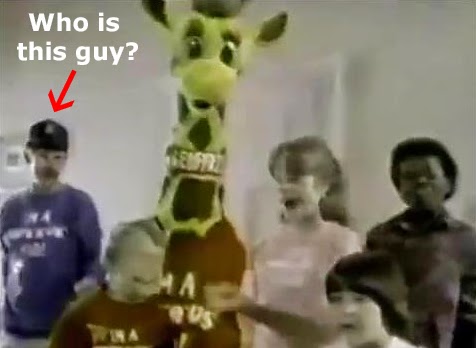 Geoffrey's handler has an awesome mustache.
In one of their trips to Geoffreyland, a random guy appears along side the TRU mascot. Who is he? Is he like Geoffrey's handler that escorts him around like TRU secret service? Apparently, he also likes Magnum, P.I. because he has an awesome mustache and is wearing what looks like a Detroit Tigers baseball cap. A little creepy if you ask me.


Toys 'R' Us stores at some point downsized from 1 million to 18,000 toys per store.
For years Toys "R' Us pounded that jingle into our heads which contained the line "there's a million toys at Toys 'R' Us that I can play with." The economy must have hit TRU hard one year because according to the above commercial, they downsized to 18,000 per store.

Oversized robots make awesome pitchmen.
Toys 'R' Us knew what grabbed our attention in the '80s...robots. Large robots as tall as Geoffrey. If I had to guess, this 1986 commercial was the source of my plea to get a Rambo Skyfire Assault Helicopter for Christmas that year.

Germans schools taught video game classes in 1981.
How else would you explain this commercial? It's definitely a cool concept of teaching "Asteroids 101." Maybe Matthew Broderick took this course in preparation for Wargames. But I still don't get why chose the "professor" as the love child of Dr. Ruth and the head Nazi in The Blues Brothers.

Toys 'R' Us spent too much of their Halloween budget on marketing and not costumes.
Look, I remember those crappy costumes back in the day with the sharp plastic masks held together with a rubber band and a staple. But it looks like TRU's Halloween budget was spent more on the cool animation in this commercial rather than their actual merchandise. I don't remember Big Bird being a pterodactyl and Yoda living in Smurf village.