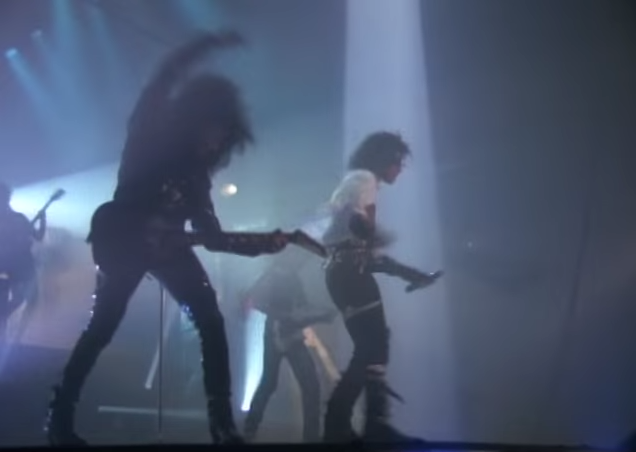 '80s music is known for big hair bands and killer guitar solos. The popularity of metal and hard rock definitely reached its peak during the decade and even occasionally appeared into the Top 40. Slash’s double-headed guitar, the multi track looper pedal, and obligatory guitar solo in the middle of a track were mainstays of the '80s rock scene.
The chart success of bands like Quiet Riot, Twisted Sister, and Guns N' Roses seemed to influence pop music in that, ballads started featuring some great guitar solos. In other cases, some rock bands just seemed to have a niche for producing power ballads and being somewhat sneaky with their electric guitar work.


Kenny Loggins "Meet Me Half Way" (1987) - Over The Top is a guilty pleasure and the "King of the Movie Soundtrack" delivers with one of my favorite '80s ballads. Loggins was not a rock god by any means based on his other soundtrack hits to this point, so the killer guitar solo (at 2:28) is somewhat surprising to me. Surprise factor: 6/10

Linda Rondstat and James Ingram "Somewhere Out There" (1986) - I remember having the 45 single and being part of my small record collection as a kid. A duet from an animated movie doesn't scream awesome electric guitar solo to me so I'd rank this one pretty high on the surprise scale. Surprise factor: 9/10

Martika "Toy Soldiers" (1989) - Have to admit that I couldn't stand this song when it was on the radio. Still not on any of my favorite lists, but hearing it now, Martika wails at times on this ballad and has a surprisingly great solo (at 2:55) and added guitar flair throughout. Surprise factor: 7/10

Michael Jackson "Dirty Diana" (1988) - Michael Jackson definitely interjected some rock into his music most notably when Eddie Van Halen performed on "Beat It" for the Thriller album. He proved it yet again when he hired big hair guitarist Steve Stevens to appear on the Bad album via the power ballad "Dirty Diana". It was still a mildly surprising to hear a great guitar work during a "King of Pop" song. Surprise factor: 5/10


Cutting Crew "I've Been In Love Before" (1987) - There were a few '80s bands from England to make a splash across the pond that I would classify outside the new wave and punk genres. You can definitely hear some synth elements in Cutting Crew's first and highest-charting single "(I Just Died) In Your Arms", but also features some great guitar work. I've always enjoyed their follow-up ballad which has a nice mix of mellow and power throughout including a great solo (at 3:13) and at the end. Surprise factor: 7/10

Cheap Trick "The Flame" (1988) - It shouldn't be too much of a surprise that a rock band would have great guitar solos in their ballads. But when your most popular hit is a ballad and happens ten years after your initial success, their is some surprise when hearing "The Flame." Great build-up to the solo (at 3:23) with a great deliver. Surprise factor: 6/10


Level 42 "Something About You" (1985) - Another British band with elements of new wave and a surprising blast of guitar. Keyboards and harmony guide you through their first and biggest single with a great guitar solo (at 2:45) that last pretty much through the end. Surprise factor: 7/10

Toto "Rosanna" (1982) - Toto's initial success with "Hold The Line" should've awakened America to their rock sound, but over the course of their career, the band's mainstream success predominately comes from pop ballads. What gets overlooked in my opinion is the great guitar solos primarily on this ballad and others like "I'll be Over You" and "I Won't Hold You Back". Surprise factor: 7/10

Olivia Newton-John "Physical" (1981) - Amongst the cheesiest track on this list is a surprisingly good guitar solo. The problem going back now is trying to overlook all the fashion, sweat, and cheese to find it (at 2:19). Surprise factor: 9/10

Night Ranger "Sister Christian" (1984) - Another case, at least in my circumstance, of a relatively unknown rock band's first hit being a ballad with a killer guitar solo (at 2:32). The piano melody usually takes center stage which makes this great guitar work surprisingly overlooked. Surprise factor: 5/10

Christopher Cross "All Right" (1983) - The high-pitched tones and easy listening hits of Cross often overshadows some great guitar work as evident by the guitar solo (at 2:23) in "All Right". For someone who has those aforementioned stereotypes of his music, I think this would be very surprising. Surprise factor: 9/10
Newer
Older
Powered by