Movie Review: Ignore The Critics And Watch 'Pixels' For The Love Of The Games 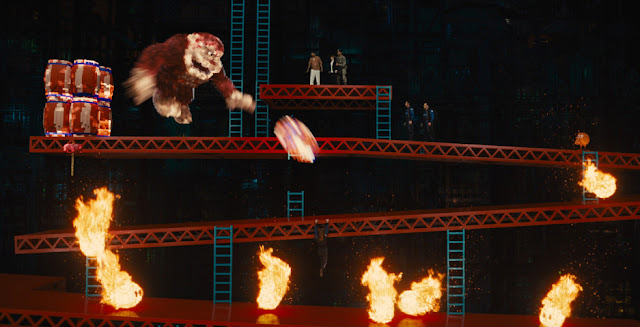 I watched Pixels in the movie theater last night and I enjoyed myself. That's a line you won't hear from any seasoned movie critic online. In fact, I've only found one positive "movie site" review from Cinemablend so far and the author got a tongue lashing in the comments. Despite the Sandler bashing and countless poor reviews, I truly did enjoy seeing some of my favorite video game characters come to life.

Let me just break down the situation before you think I'm playing a game of "Defender" here. Pixels is made for us, the 30 and 40-something year olds who remember actually playing at arcades. I wouldn't come close to recommending this movie to anyone under 30 or even kids, even though the Q*Bert character is definitely targeted toward them. This movie was made for nerdy retrogamers with fond memories of '80s culture. If this isn't you, then I can EASILY see why you would view it just as another Sandler gimmick movie. 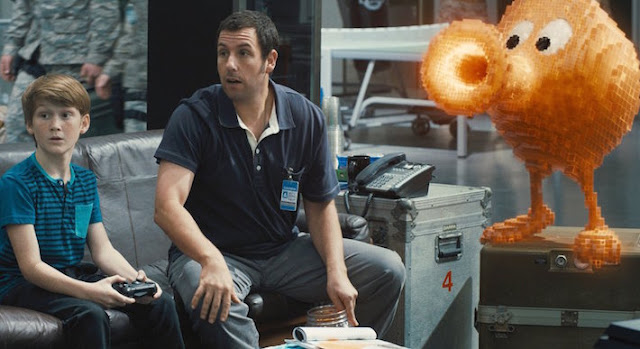 And let's address that for a minute. Out of the last 20 movies that Adam Sandler has starred, I've seen a total of 3. I've read reviews but my affinity for Sandler's comedy films pretty much died with the '90s. I don't have the experience of watching most of his recent films so I have no reason to expect nothing more than his acting performances which earned him his stardom like in The Wedding Singer and Big Daddy. He's obviously not shooting for Oscars here so I wish people would back off the "poor acting" critique. I've read reviews about Sandler's "mailed-in performance" in this movie and his lack of enthusiasm. He plays a 40-year old divorcee who installs A/V systems in people's houses for a living and whose claim to fame is being the runner-up of the 1982 arcade championship. What exactly are you looking for in that role?

Back to my situation, I gathered 4 of my friends last night (all 30-something dads like myself) to watch the movie together. I paid $6.59 for my ticket and we were the only people in the entire theater at the 8:45pm show. Based on the critical reviews, I wasn't surprised but it meant that the five of us could laugh and comment to each other throughout the entire 105 minutes. I'm sure that added much more to the experience, but I'd like to think I still would've enjoyed myself had I been there alone. 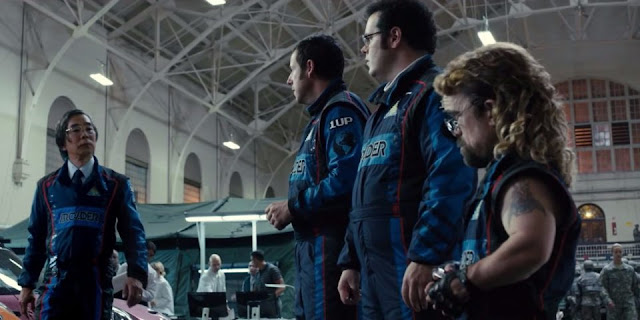 Pixels is totally ridiculous and if you don't expect that going in, you'll leave during the first video game attack. This movie has a ridiculous plot (aliens attacking Earth with video games) with ridiculous situations (using "Arcaders" as our front line military force) and ridiculous characters (an arcade champion stuck in the '80s, a conspiracy-theorist nerd that lives in his Grandma's basement, a president like Kevin James.) If you think the creators should have made it more believable then you've just missed the whole point of the movie. I see the movie's flaws, but I'm also not one to critque stuff like film editing or anything technical unless it's been filmed on an iPhone. The $88 million budget is obviously for all the licensing, permissions, and special effects shots and not for serious performances by A-list actors.

Having said that, I was surprised at how many genuine LOL moments are in this movie (mainly from Gad and Dinkler) which was way more than what's in the trailers. There were also several corny video game puns and jokes that I didn't laugh at, but I unexpectedly found myself wiping tears from my eyes from laughing so hard on a couple occasions. I was also entertained by the rampant '80s references throughout which included alien messages delivered by celebrities like a young Madonna and the cast of Fantasy Island.

The opening scene is a fun journey back inside an '80s arcade. The movie has a killer soundtrack with artists like Queen, Cheap Trick, and Loverboy with goofs on Spandau Ballet, Tears For Fears, and Hall & Oates. And try not to over-analizing the timeline of the games. Go into the movie expecting more of "The Goldbergs" universe since most retrogamers would know that Paperboy came out later than '82 games like Donkey Kong and Pac-man. 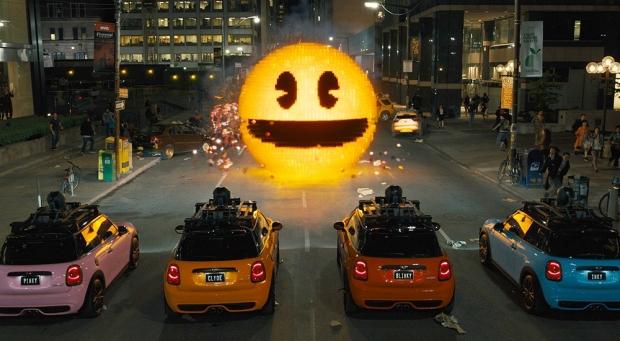 I challenge my peers to enjoy this movie as I did, with no expectations but seeing our childhood video games on the big screen. Grab a few friends, enjoy a non-crowded theater, and soak in '80s nostalgia taken from a fun 2-minute short film and not from another reboot or remake.