Iconic Cars of the 80s: The Boxcars 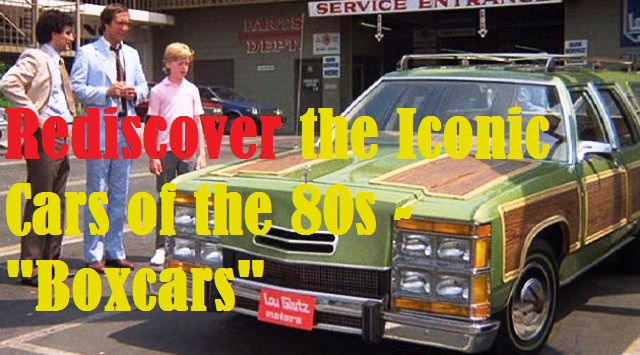 Millions of cars were manufactured throughout the 1980s. What a way to debut an article series, right? But when you think of 80s cars, what comes to your mind? Do you think of TV or movie cars like the Back To The Future Delorean, Ecto-1, The General Lee, or K.I.T.T.? Or do you think of the cars that we (or perhaps our parents) drove day-to-day or commonly passed along the roadway?

This article is the first in a series of posts titled "Iconic Cars of the 80s" in whcih we will take a look at several categories that will define "iconic" cars outside of the Hollywood realm. Where did my inspiration come from? I won't lie. I recently read an article on Popular Mechanics entitled 10 Great '80s Cars That Time Forgot, and it struck me that while there were some great vehicles in their list, only one of them really seemed to be an '80s icon. Thus, that was the reason for these upcoming articles. As I began to write, however, there are more thab just a few cars that were the torch bearers.

What were the ones that cemented the 80s era? When you see a particular car from the 80s, do you automatically say "that's an 80s car" contrary to your own opinion or bias of the actual car? Or perhaps do you hear ad jingles or TV themes playing in your mind? No, just me?

Please do not let this post steer you into what were the most reliable, sportiest, and so on. Rather, my intent is to highlight cars that seemed to cry out "I'm a car of the 80s!" and with that, we begin the Iconic Cars of the 80s adventure with what I refer to as The Boxcars.

Where would we be without the squared off so-called box-shaped cars that appeared as if they could take on a brick wall or at least New York City traffic? Although the oil embargo and the thirst for emission controls thrust many automakers into manufacturing the smaller vehicles that dominate today's car market, the large and in-charge cars seemed to be a staple during much of the 80s and led them to be classified as Iconic Cars of the 80s.

Chrysler crafted a series of rear-wheel drive boxcars best known as the Chrysler New Yorker, Dodge Diplomat, and Plymouth Gran Fury. These cars were prodcued from 1982-1989 and were commonly recognized as police cars or taxi-cabs. With Chrysler focusing more on their front-wheel drive economy cars and a lack luster mileage range compared to its competitors, these gentle giants were retired before the turn of the decade.

The Ford LTD and sister cars the Mercury Marquis and Lincoln Town Car began as box cars in 1979 and were produced through 1982 offering three V-8 engines (255, 302 and 351.) Though big to us, it was actually "downsized" from its previous model, shaving off 15 inches in length and shedding 400 lbs of curb weight. However this Panther platform was short lived and ushered in the Fox platform models. Nonetheless, this model of the Ford LTD did become iconic with its heavily modified Wagon Queen Family Truckster version from National Lampoon's Vacation and in the 1997 film Men in Black.

The Fox platform Ford LTD and Mercury Marquis took the reigns from 1983-1986 with its chiseled nose and newer design. This was also an iconic era as Ford continued to cling onto the rear-wheel drive vehicle before retiring these platforms for a time when the competition was gaining sales with front-wheel drive, more economical cars. 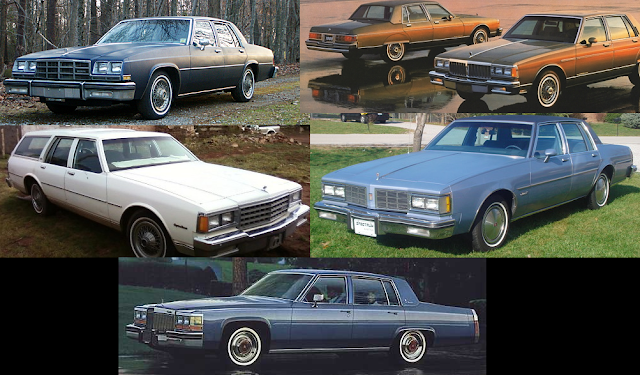 General Motors continued to keep the rear-wheel drive cars around as well, having a few more options available. The redesigned models for the new '80s decade featured tapering front ends while shaving off 100 lbs of weight. GM offered multiple flavors of cars such as the Buick LeSabre (and the station wagon model, the Estate), Cadillac DeVille with a two-door Coupe deVille also available, Chevrolet Caprice, Oldsmobile Delta 88, and Pontiac Parisienne. Each car offered a V-6, three different V-8s, and a diesel powerplant to go with two-door, four-door, or station wagon models.

Remember driving or riding one of these monsters? Miss one of your favorites? Join in the conversation in the comments section below and be sure to come back for the next "Iconic Cars of the 80s" article: The Hatchback Brigade.