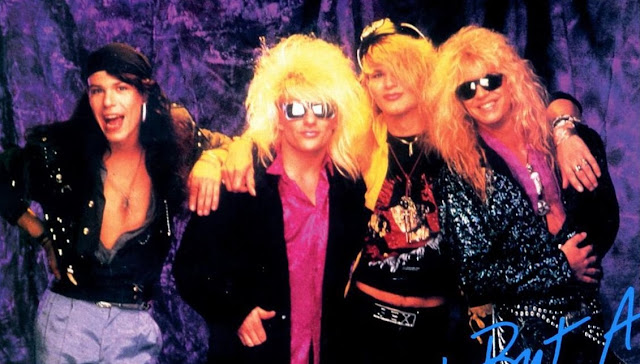 Poison's most successful album was released 28 years ago this week. Selling 5 million copies in its first 5 years, Open Up and Say... Ahh! peaked at #2 on the US Billboard 200 album chart and feature three Top 10 singles. Paul Stanley from KISS was originally set to produce the album, but due to scheduling conflicts, the job went to rock producer Tom Werman.

The album's first single "Nothin' But a Good Time" became Poison's first gold record, peaking at #6 in the US and #10 in Australia. The follow-up "Fallen Angel" made it to #12 in the US and featured Bret Michaels then girlfriend Susie Hatton in the music video. The third single would be the band's only #1 record, the worldwide hit "Every Rose Has It's Thorn" which held the top spot for 3 weeks at the end of 1988 and carrying over into 1989. The power ballad also became their 2nd gold single. The final single released was a cover of Loggins and Messina's 1972 hit "Your Mama Don't Dance" which cracked the Top 10 in the US.

My memories of the album mainly revolve around the music videos and of all things, my little league coach. He broke all kinds of stereotypes, the main one being he was a large African-American man who listened to hard rock. There were many days he would roll up to practice blasting Bon Jovi, Poison, or other bands which definitely influenced my own musical preferences.

Rediscover the Open Up And Say... Ahh! album this week via YouTube below or subscribers can listen to the full album for free through Amazon Prime music. You can also join me by posting your favorite tracks or memories in the comments.