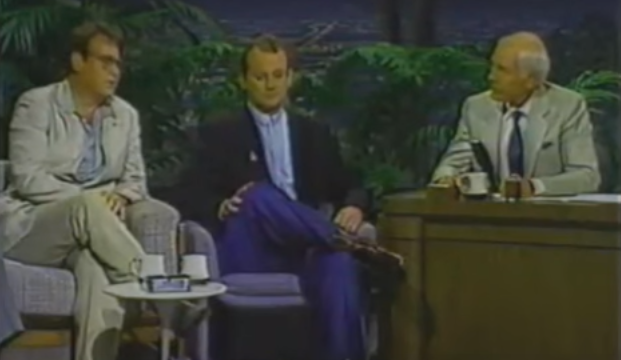 Happy Ghostbusters Day! (I didn't realize that was actually a thing!) In cased you missed the Recurrent Events last week, a Ghostbusters reunion of biblical proportions will happen on Jimmy Kimmel Live! tonight at 11:35 ET/PT on ABC. Generations will cross streams as Bill Murray, Dan Aykroyd, Ernie Hudson and Annie Potts of the original cast will be joined with the new cast of Melissa McCarthy, Kristen Wiig, Kate McKinnon and Leslie Jones.

Fans can also celebrate Ghostbusters Day by possibly catching the original film in 800 theaters nationwide today and also Sunday June 12. The re-release will also feature a sneak peek of the new film which debuts on July 15.


The original cast definitely aren't strangers to the reunion neighborhood. For the 30th anniversary, several members got together on the Today show to reminisce about what it was like to be part of the original film. And when it came to promote it, Dan Aykroyd and Bill Murray visited The Tonight Show together and again in 1989 for the Ghostbusters II sequel. The latter features Akroyd diving into his ghost research and trying to convince Johnny Carson that they exist. Check out it below and don't forget to tune in tonight!