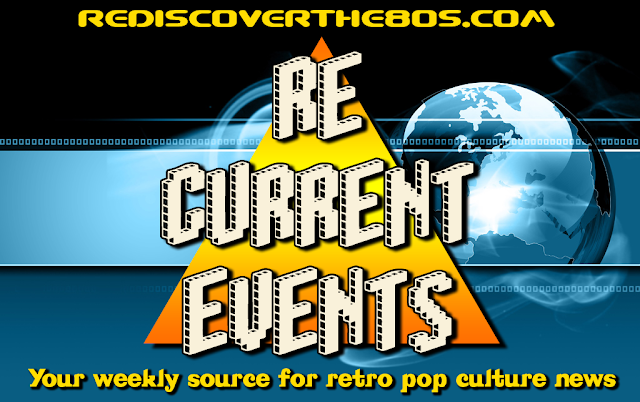 Welcome to your weekly source for retro pop culture news, the Recurrent Events! TMNT: Out of the Shadows just made it's debut in theaters and I'm really excited to see it with my boys. The Beebop and Rocksteady trailer was totally rad and I've seen mostly positive reviews so I'm banking on a fun summer movie.

Be on the lookout next week for another giveaway! Let's just say you won't have to roll the dice anymore on whether to add a little time travel to your game collection.

Also next week, there will be a Ghostbusters reunion on Jimmy Kimmel Live on Wednesday June 8 which include members of the original cast and new cast together! Bill Murray, Dan Akroyd, Ernie Hudson, and Annie Potts will be on hand with Kristen Wiig, Leslie Jones, Melissa McCarthy, and Kate McKinnon. The return of the franchise is really gaining momentum with the original film being re-released to theaters next weekend and even NBA players (past and present) like Kobe Bryant suiting up in new TV ads. Also, Ecto Cooler's return date was May 30, but I haven't found any in local stores yet. It has been posted on Amazon but its availability has been hit or miss. A local friend was able to order some so I hope to have a full case in my fridge leading up to the new film's release date of July 15!

Here are the articles posted this week on RD80s:

Thanks to UPROXX, I was reminded that Raiders of the Lost Ark turns 35 this year! The famous shot-for-shot fan remake received a new trailer side-by-side with the original. It is to promote a new documentary from the filmmakers 20 years later and how they made the fan film.

Video of the Week

Here are your Recurrent Events links for June 4, 2016!

MOVIES
'Teenage Mutant Ninja Turtles': 9 Cartoon Callbacks in 'Out of the Shadows' - Yahoo! Movies
Robert Englund gives his take on where the Elm Street remake went wrong - A.V. Club
Return to the ’80s Podcast – Episode 3: Fast Times at Ridgemont High - Return to the 80s
Anthony Hopkins Joins 'Transformers 5' - THR
The Best (and Worst) Movies Made in the 1980s - The Cheat Sheet
Celebrate 35 Years of RAIDERS OF THE LOST ARK with This Awesome Poster - Nerdist
Meet the new Pennywise the Clown - HitFix
Logan’s Run: new writer joins the remake - Den of Geek
May The Schwartz Be With These 10 'Spaceballs' Facts - Pajiba
Friday the 13th reboot will tell new origin story - Den of Geek
Dan Aykroyd Gives The New ‘Ghostbusters’ A Seal Of Approval Above Even The Original Films - UPROXX
‘Halloween’ Director John Carpenter Has No Love For The Original ‘Friday The 13th’ - UPROXX
13 Fun Facts About ‘The Muppet Movie’ - Mental Floss
Watch This Hilarious, Improvised, And Rare Camera Test Scene From 1979’s ‘The Muppet Movie’ - UPROXX

MUSIC
R.E.M. Are Reissuing 3 Albums on Vinyl - Nerdist
Faith No More Plot Reissue of Seminal Debut 'We Care A Lot' - Rolling Stone
'Ghostbusters' Soundtrack Features Fall Out Boy with Missy Elliott, Elle King and 5 Seconds of Summer - Billboard
The Strokes' 'Drag Queen' lyric video goes live from the '80s - EW
And the Only Way to Start Your Set at a David Foster Concert? Heart to Heart! - Retroist
Questlove's 40 Reasons Why Prince Was a Hip-Hop Legend - Billboard