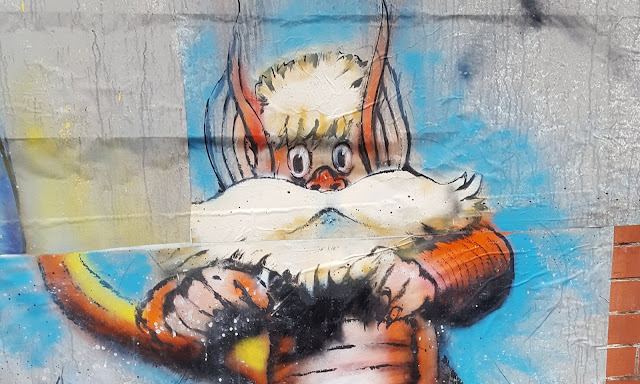 Steven Spielberg's adaptation of the novel Ready Player One is currently filming in Birmingham, England and set photos are now appearing online. With countless references to pop culture primarily from the '80s intertwined within the book, the guessing game is on as to what will actual make it into the movie.

Set photos are now popping up online and we are getting our first look at some of the street art that will be used as the backdrop. Some are quite surprising for a couple reasons, the first being I can't seem to remember if all the characters shown are actually in the book (I've read it once, but these references don't seem to be that prominent.) The second reason some of these are surprising is that Spielberg has said references to his films would be left out of the movie, yet I give you exhibit A...

So maybe Spielberg had a change of heart. What I didn't remember was any Thundercats references in the book but here is everyone's favorite Snarfy sidekick...

I don't recognize the large character in this next photo, but I do believe that is Snarf's master Lion-O, Lord of the Thundercats, on the television set in the upper right corner...


Another I didn't remember from the book was Madballs, specifically Screamie Meamie...

Spielberg was executive producer for Gremlins so seeing Gizmo isn't as much of a surprise as Jaws...

It's likely the street art will just be Easter eggs for '80s freaks like myself to freeze frame when the movie is released to home video. More photos are surfacing each day, but if you want a few more, head over to @Green_Mush on Twitter to view a few more snapshots.
Newer
Older