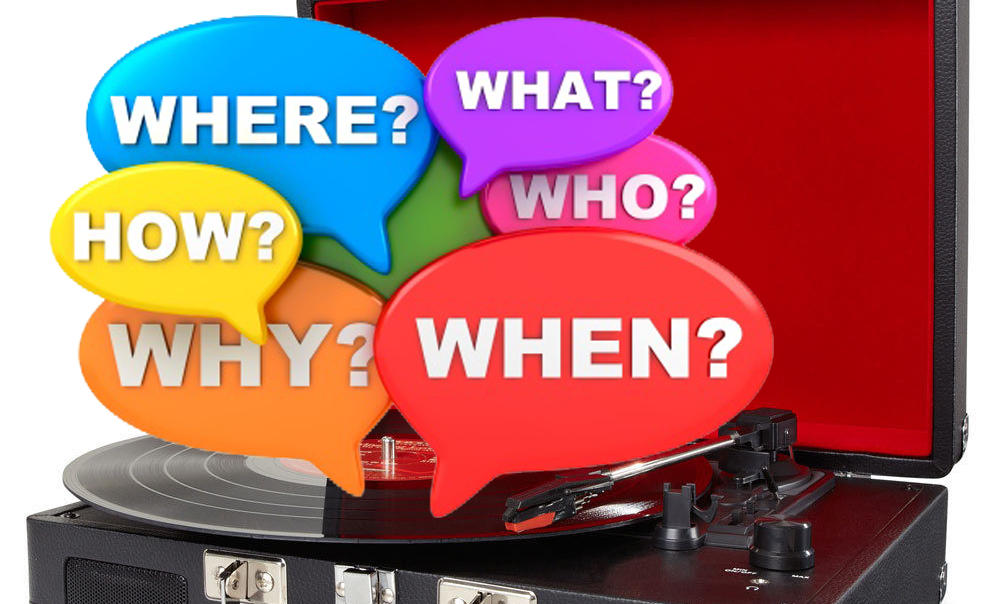 
Who? What? Where? When? Why? Would? Should? How? '80s music sure asked alot of questions. Some were deep inquiries into the meaning of life like "What is Love?" while others were just rhetorical notions that may never get answered like "Where Do Broken Hearts Go?" Either way, there were many popular songs released in the '80s that had "questionable" titles.

Check out the playlist below:

Men at Work "Who Can It Be Now?" (1981)
The debut single by the Australian band answered any questions about having an impact on US popular music. It would peak at #1 for one week on the US Billboard pop chart, one notch higher than their native country.

Whitney Houston "How Will I Know" (1985)
Janet Jackson made a questionable decision by passing on what would be Whitney Houston's second #1 single. The song's music video would also win Best Female Video at the 1986 MTV Video Music Awards.

Phil Collins "Do You Remember?" (1990)
The last single from Collins' 1989 album ...But Seriously ascended to #4 on the US Billboard pop chart. It also became popular in Bulgaria after the Royal Philharmonic Orchestra recorded an instrumental version for a popular teenage TV program.

El DeBarge "Who's Johnny" (1986)
The most successful single of Eldra DeBarge's solo career made it to #3 on the US Billboard pop chart. The answer to the question posed by the title is fairly easy as the song held the tagline "Short Circuit theme."

The Smiths "How Soon Is Now?" (1985)
While not formally released in the US (a #24 hit on the UK chart,) there is no question this is one of the most beloved songs by The Smiths. Music media outlets like Rolling Stone, NME and Blender have consistently ranked it among the best tracks by the band and the 80s decade overall.

Van Halen "Why Can't This Be Love" (1986)
The debut single with new lead singer Sammy Hagar answered any questions fans might have about the band's future. The first single from 5150 peaked at #3 on the US Billboard pop chart and helped launch the album to #1, a first for Van Halen.

Duran Duran "Is There Something I Should Know?" (1983)
Duran Duran knew something about this stand-alone single which debuted at #1 in their native UK, a first for the band. The track also had success in the US, peaking at #4 and appearing on the re-issued version of their self titled debut album in 1983.

Culture Club "Do You Really Want To Hurt Me" (1982)
Speaking of #1 UK hits, this single became the first chart-topping hit for the native Culture Club. It was also a runner-up to Michael Jackson's "Billie Jean" for two weeks on the US Billboard pop chart.

Howard Jones "What is Love?" (1983)
The second single released on his debut album Human's Lib remains as Howard Jones' highest charting single to date, peaking at #2 in his native UK. It also cracked the Top 40 on the US Billboard pop chart.

The US Billboard pop chart believed this single was good enough to be the band's first Top 10 hit. It was not released in the UK until 1985, become a double A-side single with "The Power of Love" from Back to the Future.

Tina Turner "What's Love Got To Do With It" (1984)
The lead single off her 5th solo album became the most successful of her career, peaking at #1 for three weeks on the US Billboard pop chart. The song also received three Grammy awards in 1985 to go with an MTV Video Music Award for Best Female Video.

The Clash "Should I Stay or Should I Go" (1982)
Like the Smiths song in this list, this anthem rings out among music media all-time lists more than its commercial success. The track made it to #17 in their native UK, but didn't even crack the Top 40 on the US Billboard pop chart.

Can you think of anymore '80s songs that ask a question?
While you ponder, here are a few honorable mentions:

You can also watch the Ultimate '80s Questions Playlist on YouTube!
Check out more Ultimate 80s Playlists on RD80s!
Newer
Older
Powered by