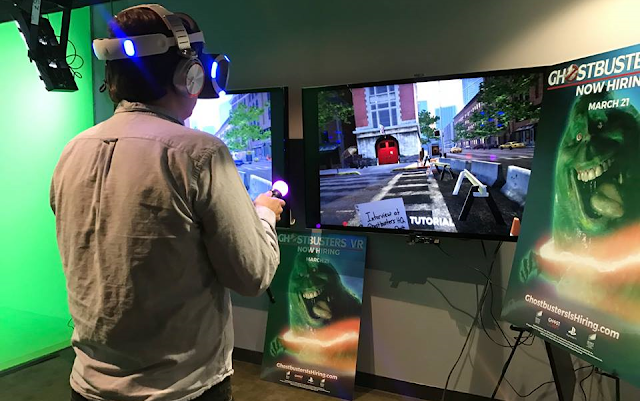 It wasn’t too long ago that Ghostbusters fans were celebrating the 30th anniversary of the seminal 1984 flick directed by Ivan Reitman. A new Blu-Ray edition of the first and second films were released along with 2016's new theatrical film. And now there’s even more good news for Ghostheads to get excited about with the Ghostbusters Experience available at Madame Tussauds in New York which brings the cinematic hit to life and provides an adventure like never before. Here we take a look at what the new exhibition involves, and discuss other potential VR experiences which could soon crop up as a result.


Some Ghostheads may remember the "Ghostbusters Spooktacular" which opened at Universal Studios Florida in 1990. It was a 20-minute Ghostbusters-themed stage show based on ghosts and events in the films, but closed in 1996 to make way for Twister… Ride it Out. At the time, the show was the closest you could get to re-experience the classic sci-fi flicks starring Bill Murray, Dan Akyroyd, Harold Ramis, and Ernie Hudson. But now, the new Ghostbusters Experience at Madame Tussauds is about to make that show look like a Nintendo Entertainment System next to the recently released PlayStation 4 Pro.

The experience is included in the admission price for the New York branch of the famous waxworks museum chain which all started in 1835 on Baker Street, London. It offers an immersive, multi-layered and sensory environment inspired by the 2016 remake of the iconic film using the latest VR technology. The female-led reboot directed by Paul Feig and starring Melissa McCarthy received a fairly positive score of 78% on Rotten Tomatoes but it can’t really compare to the original which stands at an impressive 97%. Still, the newer film used a number of the same elements as the first one so the experience should be suitable for fans of either era.


This isn’t the first time that VR has been used to provide experiences and adventures that people may not be able to have normally. Since the release of hardware like the Oculus Rift and the HTC Vive in 2016 (which have sold over 243,000 and 420,000 units respectively,) gaming innovations and simulations are allowing people to try out new things. For instance, aspiring pilots can play games such as Aerofly FS 2 Flight Simulator which is similar to the classic Microsoft Flight Simulator X released in 2006 but with higher-quality graphics. There are rollercoaster games like Atlantis Infinite Coaster which came out in 2014 to help users build up courage to go on the real thing, or give people the opportunity to ride one without risking their safety.

For people who want to get a feel for casino games but are a bit apprehensive about going into a bustling casino there is VR Roulette from Microgaming. The VR version of the game uses a 3D motion sensor which brings players' hands into the game and allows them to place chips on the table. It offers acute control so that players don't make the mistake of placing an inside bet when they're meant to place an outside one. The basic rules of roulette show that what types of bets can be placed on the inside and outside sections of the board, resulting in different outcomes. In addition to all these experiences, on PlayStation VR players can go to work in an office in Job Simulator, or find out what it’s like to be the Dark Knight in Batman: Arkham VR.


Which Other Classics need a VR Makeover?


Now that Ghostbusters has its own VR experience, this could lead to other classic films getting a makeover on the platform. There are certainly a number of hits from the '80s that would provide an excellent adventure in VR. The original Star Wars trilogy is an obvious choice, as there are already numerous games based on the epic space adventure. There also used to be the "Star Tours" ride at Disneyland based on the franchise created by George Lucas which has raked in over $7.6 billion after nine installments. The motion simulator took park visitors on a journey to Endor in the Star Wars universe and then on a virtual spaceship dogfight between the Rebel Alliance and the Galactic Empire. The ride was hugely popular and ran from 1987 to 2010. Star Wars Battlefront II, which is due to be released on November 17, 2017 is rumoured to have some VR elements, but fans may be eager for something more.

With more software available for VR than in 2016, it is expected that sales will rise considerably over the next few years. In fact, by 2020 forecasts suggest sales of headsets will reach 68 million units. If this prediction comes to fruition then there are certain to be many more popular hits from the '80s reimagined in a virtual context. What are some other franchises that you would like to experience in VR?