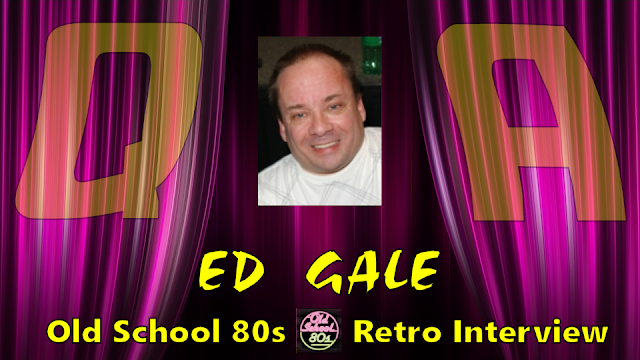 (This interview was originally published June 30, 2014 on the now-retired Kickin' it Old School blog. It is one installment in an incredible series of interviews we are republishing on Rediscover the '80s for posterity and your enjoyment. These are more than just interviews in a way; they are more like '80s timelines or oral histories on their respective subject matters. Please keep in mind the original date because some content could be specific to the time of the interview, though the majority should be timeless and totally rad.)

When the opportunity presents itself to ask a few questions to someone who contributed to the awesomeness of the '80s, I will continue to share those answers with you right here. Again, lucky for me (and hopefully you), I do get to share a little more awesomeness with you.
This time that awesomeness is Ed Gale. He is responsible for bringing some rather infamous '80s characters to life onscreen including "Howard The Duck" and "Chucky" from Child's Play. He was actually in those costumes, but has had many roles out of costume as well. Standing at just 40 inches tall, he appeared in over 130 films, television shows and commercials over his 25+ year career. Find out a little about him, working on those '80s films and more as we get on to some selections from my interview with Ed Gale...

Q: When and how did you get your start in acting? What made you pick up and move out to California to pursue it as a career?

Ed: When I was about 8 years old I saw the movie The Wizard of Oz and when I saw the credits listed the names Dorothy Gale, Aunt Emily Gale, Uncle Henry Gale, and seeing the name GALE on the their Mailbox - I sat up and said, "someday I am going to have MY name in the credits of a movie."


Q: How did the title role of "Howard" in 1986's Howard the Duck come your way? What do you remember about that audition process and how you found out you received the job?

Ed: My very first "anything" in Hollywood was Howard The Duck. My very FIRST audition, my very FIRST call-back, my very FIRST screen-test, and of course, my very FIRST role of ANY kind. I remember fondly them telling me that they really liked me, my energy, my look, my abilities, etc. BUT ... I was simply too tall.


Q: Were you excited about the opportunity to bring that comic book character to life? Was that you in the suit in every scene? 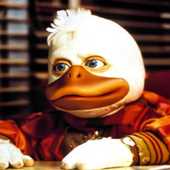 Ed: I was very excited to get the role, but I had no idea who "Howard The Duck" was or that he was a Marvel comic book character. Yes, I was in the suit every day for nearly 10 months. I was the only actor who played the role of Howard The Duck. Tim Rose, Steve Sleap, Peter Baird, Lisa Sturz, and Mary Wells (all credited as being Howard T. Duck) were actually puppeteers who controlled Howard's facial expressions via remote control. Chip Zien was the voice of Howard The Duck (Tim Rose was the voice of Howard during filming for continuity).


Howard The Duck was released in theaters in August of 1986. It was highly anticipated in part due to George Lucas' involvement as producer, but received harsh reviews and performed very poorly at the box office. Despite being called one of the worst films ever made, the film, which also starred Lea Thompson, Tim Robbins and Jeffrey Jones, has gone on to become sort of a cult favorite and is appreciated a little more now. Here is the original trailer for Howard The Duck...


Q: What were the biggest challenges of playing "Howard T. Duck"?


Ed: I would say the biggest challenges were the long hours, the immense heat, and the lack of vision [could only see of his mouth].


Q: Lea Thompson was one of the other stars of the film. What can you tell us about Thompson and working with her back then? How about Tim Robbins or Jeffrey Jones?

Ed: Lea Thompson was an absolute dream to work with. We still keep in touch to this day. Tim Robbins was extremely intense and professional. It was awesome to watch him develop the character of Phil Blumburtt.

I was probably closest to Jeffrey Jones as we had more in common on the film with us both having to be there so many hours in advance preparing his hair and all of his special effects makeup and obviously my suit and costume. We spent many hours talking about acting and growing and developing characters and such. He even came to my home in Palm Springs that year for Thanksgiving Dinner. That was truly an experience I will cherish forever. Some years later, Jeffrey would mention my name for the movie Mom and Dad Save The World [1992]. I will never forget the kindness and wisdom Jeffrey has given me in the early years of my career.


I can't believe he had to get into that suit to film every day for 10 months! Here is a scene from Howard The Duck when Beverly (Lea Thompson) is introduced to Howard when he protects her from some street thugs...

Q: What are some of your best memories from making Howard the Duck?

Ed: One of my best memories would be meeting and spending time with Thomas Dolby, Robin Williams and Michael Jackson (who was a huge fan and wanted to meet "Howard"). Michael even called my home (I was living near San Francisco that year during filming) to tell me about a project he was doing with George Lucas called Captain EO - I was absolutely awestruck!!! But alas, I was under contract with Universal Studios for Howard and would not be able to participate.


Q: What are your feelings about Howard the Duck now over 27 years later?


Ed: My feelings will never change. Howard was my very FIRST. He will always hold a special place in my memories and on my resume'.


Here is the final scene from Howard The Duck in which Cherry Bomb performs the film's title song. It was shot in front of a live audience in an auditorium in San Francisco. The song was co-written by Thomas Dolby and George Clinton. Dolby built a special guitar for Gale to rehearse and film with so he could dance and play guitar as Howard in this scene...

Q: You had a role in 1987's Spaceballs (as the Jawa-like Dink) and were in scenes not only written and directed by Mel Brooks, but also starring Mel Brooks as "Yogurt". What can you tell us about the legendary Brooks and your experience working with him?


Ed: Mel was exactly as you would imagine him, exactly as you see him on TV and the big screen: a kind, genuine, sincere, funny, and extremely brilliant human being. 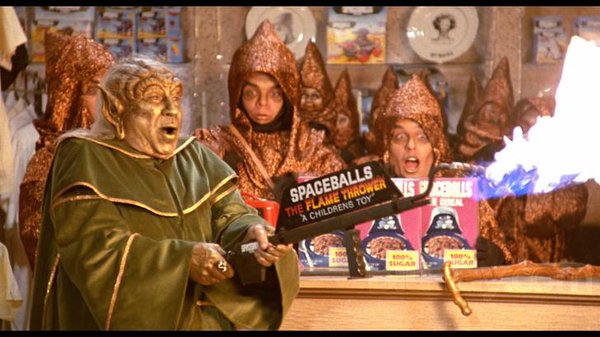 Q: Then you went on to play the role of the iconic "Chucky" character from 1988's Child's Play. What do you remember about how you ended up with that role? Did you have any hesitation or concerns about taking the job?

Ed: I remember Kevin Yagher calling me and telling me that [director] Tom Holland asked for me specifically and would be contacting my agent. I had absolutely no hesitations or reservations whatsoever. I had done a few auditions (and call-backs) for Willow but they (the Producers) were dragging their feet. So, when "Chucky" came along with an "offer", it was "in-come" vs "if-come" ... a no-brainer.


Child's Play, a movie about a notorious serial killer who's spirit inhabits a Good Guy doll, was released in theaters in November of 1988 and became an instant horror classic. Roger Ebert even gave the film 3 out of 4 stars, calling it "cheerfully energetic horror film". It went on to inspire an entire Chucky franchise with multiple sequels. The voice of Chucky was provided by Brad Dourif, but it was Ed Gale who brought the doll to life in most scenes. Here is the trailer for Child's Play... 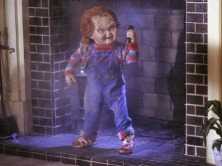 Many people don't realize that there was an actual actor inside the Chucky suit for many of the scenes. That's not just an animatronic doll, but it's often Ed Gale bringing that costume to life. That's Ed Gale in there running, jumping, rolling, stabbing and whatever else they needed him to do. Since Gale was still almost a foot taller than the actual Chucky doll, oversized sets were built for scenes he was in costume to make him look smaller. Near the end of the film, Gale performed the incredible (and very dangerous) full body burn stunt as little Andy sets Chucky on fire. Here is that scene from Child's Play...

Director Tom Holland has this (in another interview) about Ed Gale's performance in Child's Play: "Ed’s terrific. Ed was totally fearless. I could tell him how to act it and he would act it. Chucky is a combination of things to create the illusion, one of which is Ed Gale. I put Ed Gale in the costume for the burning – Ed did the scene where Chucky bursts out of the fire place and daggers across the room and falls. This is a guy who’d never done any of this stuff before. I needed a little person. I set him on fire! I also used him in costume. I built an enlarged set in the kitchen. That’s Ed Gale doing all the movements. He says the lines. I didn’t use the voice, but he’s doing Chucky, he’s acting Chucky underneath that costume. And he was very, very brave. He knew how to act it. He had the enthusiasm and the brains and the talent to be able to animate the doll for real. It takes a talent to do that, and he had it.”
Gale finished up the decade in 1989's Chopper Chicks in Zombietown. He would come back to bring Chucky to life in the sequel Child's Play 2 (1990) and also later Bride of Chucky (1998) among many other television and film roles in the years to come.

Q: What are some of your proudest professional accomplishments? 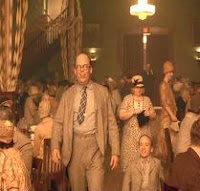 Ed: I would have to say (some) of my proudest moments would have to Baywatch [episode in 1994] (a real touching character named "Simon McKay"), Lifepod [1993] (all-star cast and a major intense role for me as "Q-Three"), O Brother, Where Art Thou? [2000] (Cohen Brothers, George Clooney, John Goodman, need I say more?), Santa, Jr. [2002] (was just plain fun), Honey [2013] (by Matt Rosvally, he is a horror genius) and ANYTHING written and directed by Jason Castle (see YouTube for Sexy Texting).
be


Q: What else has Ed Gale been up to more recently? Both acting and otherwise? 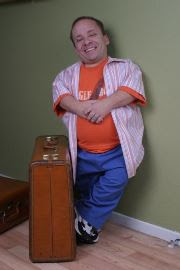 Ed: I have been retired for several years. My final film was The Polar Express in 2004 and my last couple of TV shows were guest-starring on episodes of Bones (2009) and My Name Is Earl (2007). I enjoy being a home-body and a house-husband. My Partner and I will be celebrating 12 years together this August 8th!


I am so pleased that Ed was able to take some time to answer some questions so I could share them with you here. You can keep up with him at his official website EdGale.com and his Facebook and Twitter pages. I want to take this occasion to again thank Ed Gale for his contributions to '80s pop culture especially through Howard the Duck and Child's Play and, even more, for going back to the '80s with us here for a little while as well.