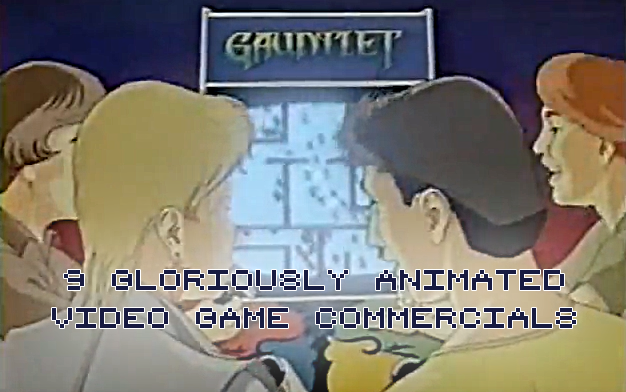 The golden age of video games marked a zenith for the industry. In 1980, arcade video games would generate nearly $3 billion dollars in North America alone. And just 2 short years later, that figure would jump to $8 billion dollars, more than the movie and music industries combined.

Home consoles and computers would continue to sustain the video game industry as a whole in the early '80s, even despite the crash of 1983. But before the plunge, all-time high revenues meant insane marketing budgets for video game developers. New game advertisements popped up everywhere from magazines to television and even movie trailers.

But when was the opportune time to reach young gamers in the '80s? Saturday morning, of course! The smart way of advertising your new video game to kids was while they watched hours of cartoons. This meant investing in animation during your commercials (or even a video game cartoon show!) Let's rediscover several video game commercials that used glorious animation to get kids into the arcade or to the electronic section of the local department store.

After initial success in arcades which saw 26,000 cabinets shipped in 1982-83, Joust was ported by Atari to its home consoles and computers. A television commercial which aired in 1983 featured glorious 3-D animation that even video games itself could not match. There are even some pokies using graphic videos in the modern day that could rival the simulated gameplay in the first part of the ad.

Atari developed a 30-second promotional ad for Gauntlet ahead of its 1985 arcade release. The video's animation was created by Sam Comstock and Brad Fuller provided the music and sound effects. The promo with a Dungeons and Dragons feel would be shown on television and in movie theaters.

Burgertime was an arcade hit by Bally Midway that was ported to home consoles by Mattel Electronics. In fact, the Intellivision cartridge became Mattel's most popular for the home console and it could be due to the commercial released in 1983. It featured integrated 3-D animation with actual gameplay following the chef through the maze and avoiding vicious-looking hot dogs, eggs, and pickles.

20th Century Fox broke into the home console game industry in 1982 with one of the first being Worm War I. The shoot-em-up style game with a hint of Space Invaders for Atari was promoted through a 60-second commercial featuring impressive 3-D animation and a rock jingle. You can even find an early storyboard script for the ad on Atarimania's website.

Only natural that a video game based on a cartoon would use animation in its TV commercials. Popeye's characters, which were originally intended to be featured in Donkey Kong, still became popular in arcades and was ported to home consoles and computers in 1983. This promo ad would feature the characters playing (and fighting over) the game.

Magnavox broke into the home console industry in the late '70s, trying to compete with the Atari 2600 and Intellivision. Around 1983, video game developers like Parker Brothers and Imagic began producing popular titles for the system thanks to its success overseas. This 1981 ad uses 3-D animation to lure gamers into giving it a try.

Q*Bert was one of those lucky video game characters to be a part of the half-hour animated commercial known as Saturday Supercade. Building on that popularity, an animated TV commercial was just the ticket for announcing Q*Bert's journey from arcades to home consoles.

Frogger was another to benefit from Saturday Supercade and even had a series of animated commercials produced for its port to Atari 2600. In fact, the commercial featured above is practically a mini-episode with just 4 seconds of actual gameplay appearing in the ad. You might also recognize Larry Kinney's voiceover at the end who is known for playing Lion-O on Thundercats and animated cereal mascots like Count Chocula.

Pac-man and Ms. Pac-man were both brought to life through animated commercial in the '80s. The smash hit at the arcade, which accrued more revenue by 1980 than Star Wars at the box office, was ported to the Atari 2600 in 1982. Despite its criticism, it quickly became the best-selling Atari game with over 7 million cartridges produced. Before Pac-man became a regular on Saturday mornings with his own show, he first came to life through the early animated commercial above.

Remember any other animated video game commercials from the '80s? Leave a comment or better yet a YouTube link to continue the conversation...