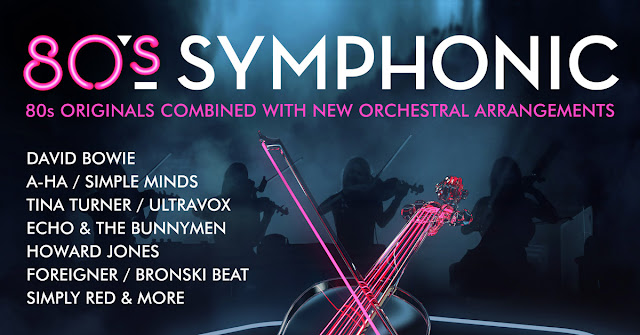 Thanks to a recent trip to YouTube, I was introduced to a new compilation album of '80s singles. I don't always click on recommended playlists but I'm glad I did this time. Do you remember back in 1999 when Metallica released their live symphonic S&M album? There was a tremendous buzz surrounding the band's collaboration with the San Francisco Symphony Orchestra and for good reason. I remember listening to the newly arranged tracks and thinking how crazy it was to combine head-banging heavy metal with soothing strings. While it wasn't a gateway drug to classical music, I think S&M opened my ears a little more to how strings and horns can take popular music to another level.

Released November 9, 2018 by Rhino Entertainment, 80s Symphonic integrates iconic singles of the decade with brand new symphonic and string arrangements performed by the London Studio Orchestra. More than just covers of the original tracks, 80s Symphonic builds on the original artist's vocal performances to give a whole new listening experience.

Now, I wouldn't go as far to say that 80s Symphonic "improves" the original recordings but I was truly blown away with several tracks on the album. Before I get into some of my favorites, check out the announcement video...

REVIEW: There are many tracks on this album I hold in high regard. The symphonic versions that truly blew me away are ones that seem to build on existing strings or keyboards within the song. When the orchestral elements are more "shoehorned" into the song, it turned me off from what I enjoyed about the original track.

Songs I didn't particularly care for on the album include "Drive" by the Cars. It's a track that I would definitely rank in my Top 5 of the '80s. The symphonic version replaces the driving drum machine beat and keyboard/bass elements of the original a little too much for my taste. In contrast, the symphonic version that did leave in the original bass line/drums and really worked was "What's Love Got To Do With It" by Tina Turner.

"Alive and Kicking" by Simple Minds is another track I absolutely love. It's pretty evident that the vocal track on the symphonic version is not from the original album release but maybe from a recent live recording. I thought the vocals distracted from the added symphonic elements except for the bridge which was a really nice take.

Now, the track that really blew me away was "I Want To Know What Love Is" by Foreigner. The original ballad is truly amazing with Lou Gramm's vocals, the choir accompaniment, and driving synth/drums. What the symphonic version does is start in with just vocals and orchestra which is different from the original that establishes the rhythm right away. Then at the 2:07 mark, the bass line and drums appear to give a truly epic feel for the remainder of the track. Amazing.

I'm a huge fan of Chicago's resurgence in the '80s (which might cause lifelong fans to roll their eyes) and seeing "Hard Habit To Break" on this album was exciting. The original track already has an orchestral fade as an outro and I was really curious how this new version would tackle it. I was also hoping the new version would really emphasize the horns since those are such an essential part of Chicago. The symphony in the new version replaces the keyboard melody throughout which I thought worked. And while the horns weren't really highlighted in the bridge like I had hoped, they did come in full throttle during the reworked outro and cold ending which was great.

My favorite Howard Jones track "What Is Love?" is on this album and was really curious how much keyboard they would replace. The original is all keyboard effects for what would be horns and strings. While I enjoy what most would label as "cheesy '80s keyboards," the symphonic version I thought replaced the those parts perfectly while maintaining the bass line and drums. And cold ending was perfect.

Click here to find on Spotify, Apple Music, Pandora, or YouTube Music.
You can also listen to all 15 tracks on the official Rhino playlist on YouTube or on Amazon Music Unlimited.