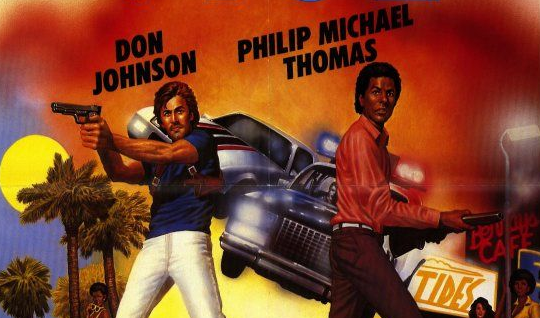 Two cool guys in hot action! That's what reads atop a 1985 German poster for the television series Miami Vice. I'm not the biggest expert in '80s advertising but I believe this hand-drawn art is unique to this promo poster. I would also venture a guess that this poster was primarily for Miami Vice: The Movie, the 2-hour pilot episode released on VHS. The pilot actually aired in the Fall of 1984, but with the soundtrack also promoted on the poster, this promotion had to have been near its October 1985 release date at the earliest. Look at the artwork itself, I love that Crockett's pet alligator Elvis is featured front and center. The likenesses for Crockett and Tubbs are also "spot on," down to the 5 o'clock shadow and fashion style. What isn't spot on is the cars. I must have missed the episode they drove Jazz from Transformers or a police squad car. But regardless, this Miami Vice poster is truly glorious and deserving to be displayed.