1980s TV Shows Where Someone Wins the Lottery 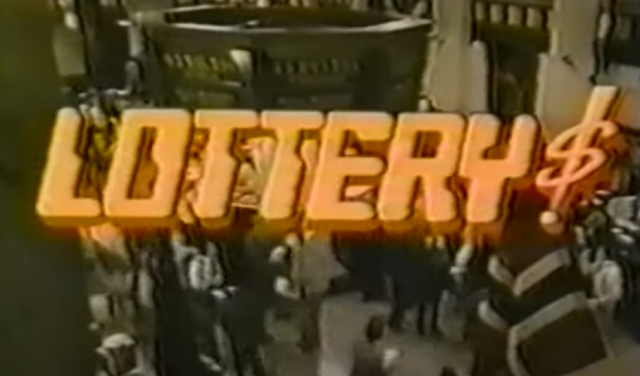 The entertainment, drama, fun, and excitement from winning the lottery dates back several decades. The world has a record of many players and winners in the '80s from TV shows. People were enchanted and focused on the lottery due to winning a huge jackpot. The most experienced dramatic stories that made waves in the early years were for lotto winners. Many became millionaires overnight.

There is a lot to learn from numerous TV shows over the years. Stories are ranging from lottery winners, lottery tickets lost and found, deserving winners, and many more. In this article, we will look back at those moments of lottery in TV shows and episodes.

Lottery! was a 60 minute America TV show featured in 1983. The series aired on ABC network for only one season from September 1984 through June 1984. It was about the sudden change in people's live when they turn into millionaires. The main characters were Patrick Sean Flaherty, who was a representative of the Intersweep Lottery. The secondary character was Eric Rush who was the middle man to take care of Flaherty and ensure clearance of all taxes.

They went around looking for jackpot winners in the United States. They would inform them about their sudden win of the Intersweep Lottery. The players would suddenly become millionaires through the lottery and their lives had changed dramatically. Episodes took part in different cities around the country.

The Intersweep Lottery was presumed to be a subsidiary of Inter-European Bank and the InterEuropeen Financial Service. The two bodies financed the series. During the grand price, Patrick ensured each winner has the winning lottery numbers for a chance to get $5,000 cash. He would then educate them on the negative and positive effects of becoming an instant millionaire.

After the issuing of the prices, there was room for dispute among the winners. In case of a rising discrepancy, Flaherty would mediate as the judge, determining the correct winner.

Wintario took place between 1975 and 1990 in Canada, with Fred Davis and Charlie Farquharson originally hosting the show. It was a lottery game sponsored by the Ministry of tourism and recreation and the Ontario Lottery Corp. The name Wintario came from the idea of raising money for leisure in the community. The first draw was in Toronto and the Ontario Science Point. The other name for Lottery grants was Wintario Grants.

Since its inception, there were no facilities to train the athletes for the summer Olympics. The lottery draws aired in community buildings and recreation grounds. The live draws happened at the doorsteps of the winners. The focus was to pump money into community businesses like hospitals and museums.

The Ontario team would pack their bags every Thursday to travel to a different location across Ontario for the draws. As the draw grew, it started hosting in other towns like Windsor, Minaki, Hamilton, and Owen Sound. There were a total of 648 weekly draws across each city.

The draw went viral as more people got interested in it. There were more applications, although some towns did not still have the facilities to host the draws. The live draws started experiencing many people who would come out in large numbers to watch. Wintario was unique on its own. It had one of the audience look for button pressers with a remote control to let out the trap doors. The button presser would later be branded as the winner and mayor of the town.

Episode 17 of Season 3 in The Incredible Hulk series was "The Lottery." The episode aried in 1980 and featured the main character Bruce Banner receiving a lottery ticket from a newsstand owner named Harry Henderson. During his daily walk, Banner trips over Henderson, played by Robert Hogan, just after goons just attacked him. Banner saves him and they become friends and begin working together. Robert wins a lottery, which gets Banner surprised at how such a man could win big within such a short time.

Banner becomes possessive with Harry's money and wants to control it. He is seen shopping around to buy science tools and a laser. It later dawns on him that he cannot have the money because Harry has disappeared. Banner gets angry and seeks revenge. He would go head over heels to kill Robert and get the money. During the episode, he gets a chance to kill him, but still, Robert misses by a whisker.

Over the years, television viewers have enjoyed dramatic lottery shows and movies. Some saw it as real-life drama, fascinating and entertaining. There is quite a big difference between today's lotto and the lottery in the '80s. Your motivation should be to learn more about how lotto can dramatically change your life within a short period.
Newer
Older
Powered by