The Evolution of Sports Video Games 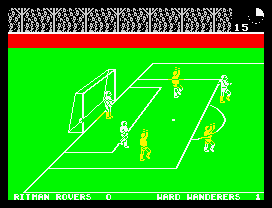 People love sports, so it is not surprising that this love of sports was transported into the realm of video games. Most sports have a game version that allows people to partake in the competitiveness and fun of a sport that is expertly recreated on a screen. Although in present times, sports video games are so realistic it can feel as if you are experiencing them for real, it hasn't always been like that. Sports video games started out simple, like all video games, but that didn't make them any less enjoyable than the ones we have today. If you read on, you will find out more about the evolution of sports video games, and about some of the most stand out and memorable sports games from the 80's.

The Beginning of Sports Games

The first-ever sports game was created in 1958, although many credit it as being the first video game ever. It was a two-player tennis game that was aptly named Tennis for Two and was created to be played on an oscilloscope. An oscilloscope was not created to have games played on it; in fact, it is an electronic test instrument. William Higinbotham designed the game purely for the entertainment of visitors to the Brookhaven National Laboratory. It was very popular, especially with high school students, and there were queues of people lining up to see the game, and have a go themselves. This straightforward game showed that it was possible to play action games on a computer.

This game was improved for the next year, but after that, it was largely forgotten about until the late '70s. It was arcade games which would then take the leap into sports games next. The Japanese company Taito, previously specializing in jukeboxes and vending machines, created the game Crown Soccer Special in 1967. Sega released an arcade sports game in 1969 called Grand Prix, along with Chicago Coin who released Speedway.

The first video game that would become a commercial success, however, was Pong. Created by Atari in 1972, Pong was designed to be an electronic version of table tennis. As a two dimensional game, it is simply designed but can become competitive to play. The player controls the paddle in-game by moving it up and down in order to hit a ball back and forth until they or their opponent fail and someone earns a point. It was so popular that many people still remember it and play it today.

In the next few years, more and more sports video games would be created, including some based on soccer, hockey, basketball, volleyball, boxing, bowling, and baseball.

Sports Games in the '80s

The '80s was a great time for the realm of gaming. Many at-home consoles were released, and arcades continued to be popular. As more and more games were released, there seem to be one for every kind of sport from wrestling to rock climbing. Below are just a few of the sports games that were published in the 1980s:

Laser Grand Prix was a game created in 1984 by Taito and produced on laserdisc. It also included live-action footage. In the first part of the game you had to qualify for a race position in a 400 metre drag race, and then you could go onto the 'GP race', 'Spark race', and finally the 'Fantastic race'. In each race, you have 70 seconds to get to the finish line, while you avoid hitting other cars and walls.

Released in 1984 on the ZX Spectrum, Match Day (headline picture) was the first video game that had moving footballers who could play and do things such as throw-in, dribble, and take corners. It was also later released on the BBC Micro, Amstrad CPC, and Commodore 64. The game was popular enough to go on to have sequels. 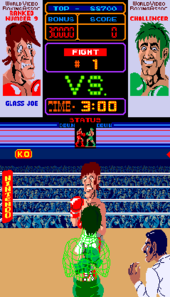 Punch-Out!! was a boxing game created in 1987 for the Nintendo Entertainment System (NES.) Players would play as a boxer Little Mac, and they would need to face several fictional opponents until they reach the final fight known as the 'dream fight'. The 'dream fight' would be against a highly skilled boxer, who, in some versions of the game, was Mike Tyson.

In 1987, Electronic Arts released Earl Weaver Baseball. It was a popular game with many innovations which have become part of many computer baseball simulations even to this day. It was the first game to allow players to simulate a whole season of games instead of just a single game, and without showing each game play-by-play. It was also the first time that players had the option of playing in arcade mode or manager mode, depending on how they wanted to play the game. The stadiums were also different, and the gameplay changed to account for their actual dimensions. It was even the first time that a baseball manager worked with game designers so that they could provide the artificial intelligence and managerial strategy for a game. Due to all these innovations and more, Earl Weaver Baseball is still considered to be one of the greatest baseball games to be created.

Being created in 1989, Baseball Stars only just makes it into the list of sports games from the '80s, but it is still a great one. This game allowed players to build their own baseball team, naming each player and their team, organize a baseball league and play a season. It was also the first sports game with a battery backup that allowed you to save your game, allowing players to earn money over time to spend on upgrading their players so that they could have stronger teams. This is something that is taken for granted in games today, but when this game was released, it was a feature that made it stand out.

Sports video games have continued to become more complex as games consoles have become more powerful. In the 1990s the 16 bit era began, so games consoles could handle graphics and games that were more complicated. Taito released Football Champ in 1990 which allowed up to four people to play together either cooperatively or competitively, giving the option for more players than usual to play together at any one time. Tecmo Super Bowl was the first American football game to have real NFL players on game teams, giving players new reasons to become invested.

In the 90's Electronic Arts (EA) formed EA Sports, as a division that solely produced sports games, and still does today. Games are updated and released every year to incorporate changes in the sport and the team since the previous game release. 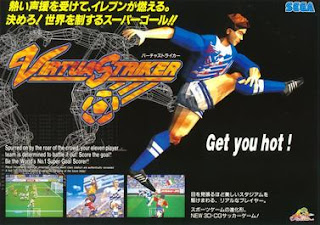 Another significant development came in the '90s in the form of 3D graphics in sports arcade games. The most notable use of 3D graphics in a sports game was Sega's Virtua Striker in 1994, which also made use of texture mapping.

As time moved into the 2000's sports games were able to make use of advancements in motion capturing software so that the athletes that we see in our games could move more realistically. This technology was used in the creation of classic games like Tony Hawk's Pro Skater so that the movements could be perfected.

From motion capturing software, consoles like the Nintendo Wii moved into motion-activated controls. This development enables sports videos games to be played more interactively, and in a way that reflects the way that the real sport is actually played. The original game that came with the Nintendo Wii allowed you to play bowling, boxing, tennis, golf, and baseball individually or with other players. It also gave you the ability to track your skills and the progress you made as you kept playing and improving. Later on, more sports games for the Wii were released like Mario & Sonic at the Olympic Games and Wii Fit which made use of a Wii Balance board to do various fitness exercises.

As consoles get more powerful, it allows for more realistic graphics that can be viewed nicely on our HD screens. Sports games have even made their way into the realm of virtual reality so that you can really feel as if you are playing the game. With the release of new consoles in the coming year, such as the Xbox Series X and the PS5, we can only imagine what new games we will see in the future and what their gameplay will be like. It might not be long until there is some new innovation that previously could have only been dreamed off.

There are still plenty of ways that you can experience these developments in sports games as you don't have to stick to playing only new releases. Many old video game platforms are worth checking out. They can show you that games can still be fun and have fantastic gameplay without all of the complicated (and impressive) graphics and story lines, but also give you the chance to realize just how far video games have come in such a short amount of time.