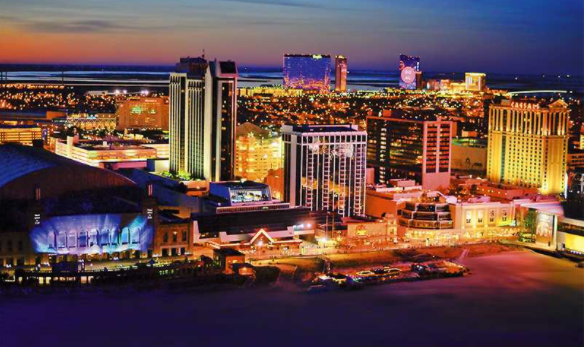 New Jersey’s answer to Vegas, Atlantic City, has long been a mecca for gambling heads, as well as those looking for an exciting beachside escape. However, it was the 1980s when this city was a real pinnacle of glamor and excess. Let’s take a step back in time and check out how this city rose to fame and fortune.

The beginning of something special

On May 26, 1978, legalized gambling officially began, with casinos in Atlantic City celebrating to great fanfare, with ribbon-cutting ceremonies and a steady line of customers ready to put their coins into the new slot machines and throw down money at the tables. This was the beginning of it all.

It was the country’s second legal casino gambling endeavor outside of Nevada, and over the opening weekend crowds of up to 500,000 were expected. The first casino in town was Resorts International: an old Quaker rooming house that was built in 1868, where the casino floor was open between 10am and 4am (6am on weekends).

Long before the internet and winning money online became big, doing it in person was something everyone was excited about.

A slew of other casinos then opened their doors to the punters: Caesars Boardwalk Regency, Bally’s Park Place, Brighton (Sands), Harrah’s Marina, and Golden Nugget were all open by the end of 1980.

1980 also saw the release of Atlantic City, a movie starring Burt Lancaster and Susan Sarandon, a romantic crime flick that followed the fortunes of Sally (Sarandon), a waitress in an Atlantic City casino who gets caught up in a cocaine-selling plot with her downstairs neighbor. Both Lancaster and Sarandon received nominations for Academy Awards for their performances.

Ramping up in the 80s

Like Vegas, the city soon became a mecca not only for gambling, but other entertainment, too.

Hotels like The Atlantic Club Casino Hotel spruiked fancy wedding packages, including receptions, beach ceremonies, and bachelor and bachelorette parties. The city became known as a boxing capital, hosting big-names such as Matthew Saad Muhammad, Kid McCoy, Mysterious Billy Smith, and even the notorious Mike Tyson. In fact, for most of the 1980s, the city was a huge drawcard for fights.

The music calendar was packed with the best of the best: The Beach Boys, The Wailers, Bob Dylan, Frank Sinatra, and The Rolling Stones. The city is home to the famous Miss America Pageant, which was a huge deal at the time.

The 1980s were known as a decade of capitalistic success, and Atlantic City embodied that spirit, as a rich person’s paradise. Anyone who could fly in from the West coast in the 80s had the type of money where they didn’t need to think about money.

Much like Donald Trump is the talk of the town (read: world) in 2020, so he was too in the US in the 1980s, his name inextricably entwined with Atlantic City and making a big name for himself.

After some Atlantic City property deals with his father in the early 80s, Trump went on to purchase the New Jersey Generals, a football team in 1983. Trump Plaza was opened in 1984, a $210 million, 39 story casino and hotel, cementing the Trump brand on the city. In 1985, Trump Castle came along, a gaudy name that even spawned a series of gambling simulator video games by Capstone Software, a leading gaming house. In 1990, there came Trump Taj Mahal. In the 80s and early 90s, Atlantic City was Trump town.

And Don hung out with the world’s top celebrities in Trump town: Don King, Hulk Hogan, Michael Jackson, and more.

However, the Trump Taj Mahal was to be the undoing of Trump’s fortunes in the town: after costing a whopping $1.2 to build, the casino was sold for just 4 cents on the dollar in 2017. With six bankruptcies and three failed casinos, Trump was known in the town for being full of empty promises.

Atlantic City now provides a stark contrast to its 1980s heyday. The over-the-top flamboyance of the 1980s is no longer in vogue, and the town is no longer the sparkling gem it once was. Covid has put an even greater dampener still on AC’s fortunes. While it’s not to say that the city can’t once again be a huge drawcard, times have changed and this casino city needs to keep up to once again be highly relevant
Newer
Older