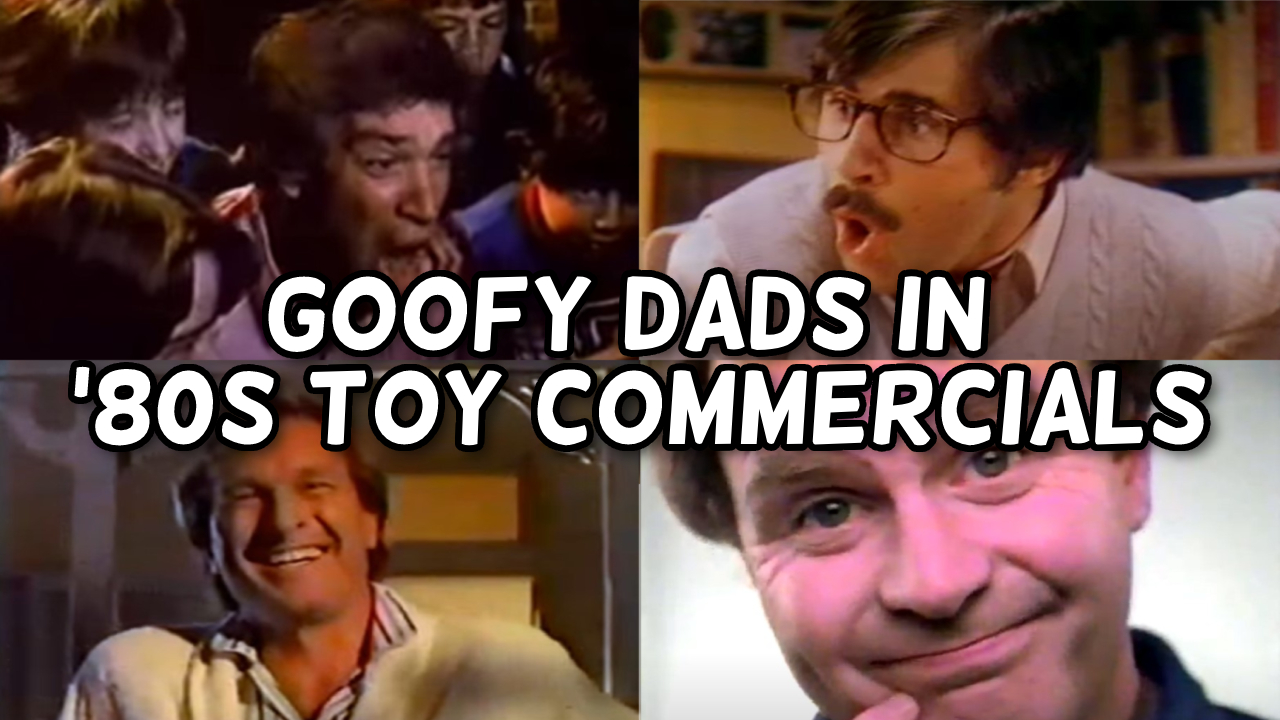 Goofy Dads are back! You might remember a compilation I posted awhile back of Goofy Dads in '80s Toy Commercials. The 1980s were filled with TV ads that depicted wacky fathers who just wanted to channel their inner child and have a little playtime with their kids. And while I can sympathize in the modern day as a father myself, the Goofy Dads of these commercials were just a little too "over the top" in how they were portrayed.

In this new batch of commercials, you'll see Goofy Dads overreact to slot car racing, act like primates, prove they exist in outer space, and just say "Smurf it all!!" when it comes to video games. Here are 10 more Goofy Dads in '80s toy commercials.

Anytime there is a bad guy role in a commercial, Goofy Dad always plays the villain to the kid's hero. There was no chance an evil semi truck was going to take down K.I.T.T., but leave it up to Goofy Dad to sell the role.

And I thought Minecraft players were loud and obnoxious! They have nothing on these Smurf gamers from back in 1983. Of course, Goofy Dad wants to get in on the excitement but takes it a little overboard on the Smurf action verbs and decides to "Smurf 'em all!"

Need someone to act like a monkey? How about act like a klutz? Goofy Dad to the rescue! The whole family gets in on the wackiness in this MAD Magazine board game commercial so Goofy Dad actually has a peer group for once.

Who's gonna play the evil, shadowy figure that emerges from the house? Goofy Dad, of course! And just so there is no confusion from a real spooky specter, we'll moniker "Dad" right on the front of his robe.

Who's man enough to take a fake apology from a kid? That's right, Goofy Dad can take it and even look surprised when it happens.

Goofy Dad remembers having Hot Wheels as a kid so all he wants to do is join in the fun. He'll even act surprised by all of the features your new track has, even though he was the one that likely bought it.

Goofy Dad won't take the "hot idea" of a Hot Wheels playset seriously, will he? Of course, he will! Goofy Dad will always try to paint his car by renting a crane and dunking it in a dumpster full of water.

C'mon, all Goofy Dad wants to do is get the rock out of his shoe. Now, he has to deal with ignorant kids running Hot Wheels into them.

Goofy Dad doesn't care what he's buying, just get the kid to stop asking him about it!!

Goofy Dads even exist in outer space! Would aliens play a video game about shooting other aliens? Maybe not, but the feeble mind of a Goofy Alien Dad would do anything (even miss meals) to play video games.
Newer
Older