Posted atNovember 18, 2021Posted by:RD80s StaffLabels#1980s, #80s, #computers, #Internet, #Technology Post a Comment
Share
The 1980s gave the world many amazing innovations. In addition to Pac-Man, Cabbage Patch Kids, the Rubik's Cube, and MTV, this list includes some of the things that helped create the internet as we know it today. So, hop into your DeLorean, fasten your seatbelt, set your flux capacitor, and read on to enjoy a trip back through the '80s – with a focus on the essential elements that gave us the internet many of us regularly rely on and oftentimes take for granted today. 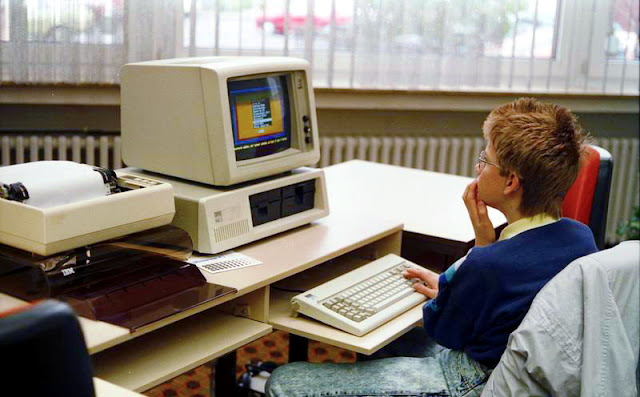 In the late 1970s, Dr. Lawrence Landweber started a networking project called TheoryNet. Developed for theoretical computer scientists, it involved into an early email system. As the 1980s kicked off, Dr. Landweber spearheaded the CSNET (Computer Science Network) project. It was created to establish a network between universities throughout the United States for research purposes. Landweber's proposal was revised to include:
The plan was approved by the National Science Board (NSB). The first year of the '80s was also when reduced instruction set computing gained momentum and IMB opted for Microsoft's disk operating system (DOS) for its planned line of personal computers.

The idea of connecting computers in various locations via a single, interconnected network took off in 1981. Startup networks called BITNET and CSNET were using a couple hundred computers to link several institutions.

Other Internet-related highlights from 1981 include:
In 1982, the computer was named Time Magazine's "Man of the Year." This was also when designer Steve Chen led the team that created a supercomputer known as the Cray X-MP, a successor to a similar device that debuted in the mid-1970s. It's notable for its brief reign as the world's fastest supercomputer.

Additional 1982 highlights include:
The living internet also expands in 1982 thanks to a blend of TCP/IP and local area networks utilizing Ethernet technology. The first coaxial cable interface for micro-to-mainframe communications was also introduced this year.

ARPANET was divided into public (ARPANET) and classified (MILNET) networks by the Defense Communications Agency in 1983. A numbering system was also developed for interconnected networks at this time. However, the growth of the internet made a numbering system impractical, so a Domain Name System (DNS) was developed, which gave us the now familiar "at" symbol.

Ethernet became commercialized in 1983 as well, which further spurred growth. A company called Sun Microsystems also created workstations with built-in networking. Additionally, there were workstations being shipped with an altered version of the token ring network. Lastly for 1983, congressional hearings put a spotlight on the need for a more ambitious plan to increase the availability of supercomputers for researchers.

The debut of the iconic Apple Super Bowl ad that introduced Macintosh was one of the more notable highlights of 1984 in terms of public awareness of the many benefits of easily accessible computers. It also ushered in a flood of new computer users.
Some of other events of note from 1984 related to this timeline include:

The National Science Foundation (NSF) awarded five contracts for supercomputing centers to improve access to improved data processing capabilities in 1985. MIT also published a translated version of a computing and communication guide originally presented by industrial visionary Dr. Koji Kobayashi in 1929. As 1985 comes to a close, there are around 2,000 hosts on the internet.

The year 1986 saw the creation of several regional feeder networks, which resulted in an important and beneficial hub and spoke infrastructure. The number of interconnected networks also spiked from 2,000 to more than 30,000 by late-1986 and early 1987.

Additional highlights from 1986 include:

Commercial access was given to UUCP and the USENET newsgroups in 1987. This was also when a non-profit corporation known as the Corporation for Research and Educational Networking (CREN) was formed by the merger of BITNET and CSNET. Another major milestone in 1987 was NSF's introduction of 1.5Mbit/s T1 links, which led to proposals for T3 speeds due to its successful implementation and adoption. A networking protocol called Simple Network Management Protocol (SNMP) became the solution for the need for network management in 1987. Lastly for '87, there were more than 10,000 hosts as the year wrapped up.

In 1988, the completion of the NSFNET backbone to T1 made the internet a more global thing as connections were established in Canada and some countries in Europe. The net attracted some notable regional users as well, including FidoNet, a popular a point-to-point and store-and-forward email WAN.

Other highlights from 1988 include:

Commercial internet services were becoming a thing in 1989. This major milestone was spurred on by a slew of commercial email systems, a list that included CompuServe, Telemail, and OnTyme. The internet became even more international in 1989 as well, with new additions that included Mexico, Israel, and the United Kingdom. This is also when the Internet Architecture Board reformed a standards organization known as the Internet Engineering Task Force (IETF) along with the Internet Research Task Force (IRTF).

Some other notable happenings from 1989 networking/internet-wise include:
A hypertext system was also proposed in 1989. Its purpose was to allow the internet to be accessible on different operating systems. This is what became the World Wide Web (WWW). Finally, the decade wrapped up with more than 130,000 hosts and counting.
Newer
Older