8-Bit Spy Battle For The Ages 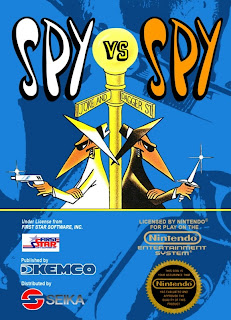 
As far as "spy" video games go, I'd probably go with Spy Hunter as my favorite of the 80s, which I've already added to the 80s arcade. My second favorite would have to be Spy. Vs. Spy. My good friend and RD80s contributor Wyatt Bloom and I would play this game for hours as teenagers. It was two player fun that was unmatched in my NES gaming experience. So lets rediscover the game, music, and legacy that was the ultimate secret agent briefcase battle in Spy Vs. Spy!

The Yin and Yang of Spy Characters Spy Vs. Spy started out as a wordless comic strip in MAD magazine #60 in 1961. The characters were created by Cuban political cartoonist Antonio Prohias, who migrated to the US after he felt threatened by Fidel Castro over his portrayal of him in political cartoons. He was hired by MAD magazine in 1960 with his prototype for Spy Vs. Spy, of which he would produce a total of 241 strips over his career. After his retirement in 1987, the strips continued in MAD using the talents of Duck Edwing and Bob Clarke and currently Peter Kupertook. But the war between the black and white spies has not always been just on paper. Since the early 80s, the popular spy characters have transcended the confides of comic strips to animated cartoons, TV commercials, and video games. 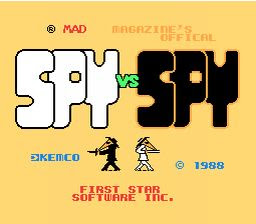 Having not been an avid comic book reader growing up, my first experience with Spy Vs. Spy was on the Nintendo Entertainment System in the late 80s. I was hooked from the first time I watched my opponent float toward the heavens from one of my cleverly hidden booby traps. But even before the battle was ported to console systems like the NES and the Sega Master System, Spy Vs. Spy was created first for all major home computers in 1984 by First Star Software. The game's innovative split-screen multiplayer format was well received by critics and gamers alike. When it was ported to console systems in 1988, the gameplay was pretty much still the same no matter what version you had...collect a passport, plans, money, and a key in a briefcase and exit the embassy building to an awaiting plane ride out of the country. There was just one catch...you had to battle your rival spy who is trying to complete the same task.


The key to victory...locating the items on a handy dandy map while avoiding booby traps set by your rival. At your disposal is an unlimited supply of bombs and springs to set in furniture, plus acid bombs for doors and a timed gas bombs that where set to go off when your rival spy enters the room. But not only did you need to avoid your rival's traps, you also have to remember where you placed your traps as to not impose self-inflicted death. And if that wasn't enough, you had to watch out for one-on-one fisticuffs with your rival. Finding the knife or black dagger was a must, especially in the small embassies with only a handful of rooms. But alas...at your disposal were umbrellas, bolt cutters, and bomb defusers to de-booby (word?) any traps in your path to victory.

This was really the first game that I remember "screen watching" came into play. It was important to see where your opponent was and occasional what he was up to in order to avoid booby traps. My strategy was always to set a trap on one of the collection items that had a defusing item nearby, just in case my opponent would get ahead in the collection race. I even enjoyed playing against the computer in this game. Man, that spy was dumb...setting traps and then activating them himself. I always liked to make his time run completely out and then collect the items I had stashed away. Mostly though, I think what kept me coming back was that theme that got stuck in your head. The game only had two, one for the opening start screen and then during game play. And what 8-bit rhythm accompanied this arena of death?

The Land of 1,000 Lives
Since 1984 when the games appeared on store shelves, the popular spy characters have also transcended the confides of comic strips to animated cartoons, TV commercials, and even a board game. Released in 1986, the Milton Bradley board game featured up to four players trying to move their spies through tunnels to collect bombs. In 2004, the spies were at it again in a series of Mountain Dew television commercials. Each ad was in black and white with a sought after Mountain Dew can as the only item in color. But the spies' television career had attempted to begin long before these ads. In 1974, a MAD Magazine TV Special was produced but never aired because of television execs deeming the humor to crude and adult. The spies did have short animated clips in the special (which was of all things, in color.) Then from 1995-2009, MADtv finally brought the spies to the airwaves with animated shorts in between sketches. Currently, you can still find the spies duking it out on the Cartoon Network show MAD.