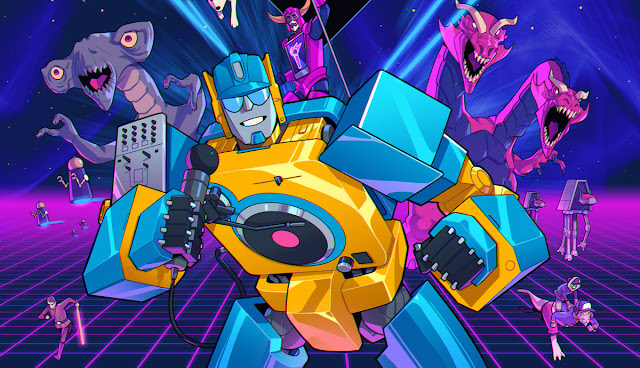 Wordburglar is back with a brand new nostalgia-filled album of rhymes titled SpaceVerse.

It features all new songs inspired by some of the greatest intergalactic icons like Transformers, Star Wars, Star Trek, Visionaries, Dr. Who, Robotech and more. WB dropped a few tracks from the album in the EP The Mos Eisley Rap Show back on Star Wars day earlier this year. But now you can hear all 14 tracks featuring your favorite space-places & star-characters.

If you aren't familiar with Wordburglar's music, I think of him as "the Eminem of Retro." I first heard his rhymes back in 2013 when the G.I. Joe themed Welcome to Cobra Island first dropped. He's since released several more albums and even an 8-bit music video for his single "NARC HI-Score (in Nintendo Power)", which is a glorious true story. Now, SpaceVerse is here but before you prepare your ears for interplanetary bliss, check out my interview with WB with some behind-the-scenes info about the new album and his music in general...

Tell us a little about the new album. Is there one track in particular that you would say is the brightest star in Spaceverse?


I honestly can't pick a favorite. Every track scratches a particular itch for me, from harder hitting jams to laid back concepts to just getting silly. I feel it's balanced perfectly and every song has it's place. I'm real happy with the end result.


Take us through your creative process. Do you pen the lyrics first and then find a beat? Or do you develop a rhythm and draw on that to develop the words?


I'm all over the place. Sometimes I have a concept in mind and then I'm waiting for the right beat, other times the beats will inspire the idea. I'm always striving for the perfect marriage of lyrics and beats so by the time you hear the finished product they've hopefully fused into one all-powerful combiner with a unique personality all their own - not unlike a Devastator or Menasor or Bruticus if you will. Though maybe not Menasor, he was pretty unstable haha.


Do you rely on personal pop culture experiences for your music or do you go back and revisit old school shows/movies to draw inspiration from? 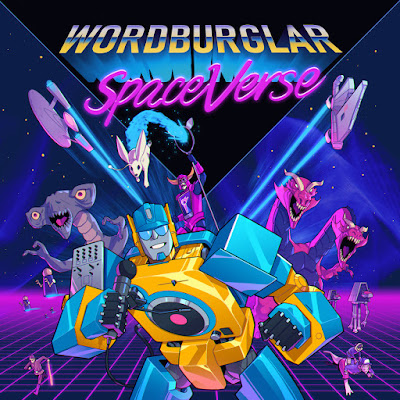 All my songs come from personal experiences based on stuff I love or know about. This goes for all my music - be it my love of music, food, sports, geekier passions, whatever. When doing an album like 'SpaceVerse' it's a lot like playing with some toys or making up my own stories. I used to get comics off the racks at gas stations or grocery stores as a kid and they'd always be out of order. It was rare to get two or more consecutive issues of the same comic in a row, so what would happen was I'd just imagine what would happen next or fill in my own gaps based on reading issues that were far apart from each other. Years later when I'd finally fill in the holes of those comics I was often disappointed because I had grown used to the ideas I came up with - most of which I thought were better of course haha. So with a concept record like 'SpaceVerse' all I'm doing is making up my own stories or concepts inspired by the art and ideas I love. Most of the time I am writing from memory. I seem to be able to never forget obscure things like Visionaries or Hoojibs or Alpha Trion's beard - y'know, the important stuff haha! I will for sure go back and revisit this stuff when I have time, but that's usually just because I love it and it's fun to go back to. You can never watch 'Empire Strikes Back' enough times, y'know?


I've seen Cybertronic Spree in concert and they put on an unbelievable show. What was it like collaborating with Hot Rod on "That Metroplex Life?"


Hot Rod is one super talented 'bot! He's an amazing singer with a great sense of humor and personality on the mic and honestly totally nailed his part on "That Metroplex Life" - he got the vibe instantly and it was a real pleasure working with him. The band is incredible and having toured with them a few times we've all gotten pretty close so the collaboration was something we've been talking about for awhile. I really hope it's the first of many as I'd love to collab with everyone in the band. Since you've seen them you know how awesome they are, and for everyone else I highly recommend seeing the Spree live the first chance you get! We're lucky to have them in our Solar System!


You've got several albums and an EP under your belt now. Do you try to build from previous albums or do you try to keep each project separate?


'SpaceVerse' is actually my 7th full-length album, which is crazy for me. It's definitely it's own entity, much in the way 'Welcome To Cobra Island' was, but I feel that if you like one of my albums you'll be able to find songs you dig on all of them. I want every album to stand out on their own but fit in perfectly with the rest of the discography. They're all part of the bigger "Burgie-verse", and do have a lot of connecting tissue buried within the tracks, whether it's in the performance, rhyme styles, flows, voices, characters etc. For example, I have a character I call the "Do-you-have-the-one-where-Guy" and he appears on a lot of my songs like "Drawings with Words," "From Earth," etc. There's also a connector between "Dude Where's My AT-AT AT" and "I don't wanna go to Cobra-La", both songs feature myself and Rift playing lowly, bumbling stooges in evil organizations haha. And there's lot of stuff like that I like to do on every album. In terms of songwriting and performing I'm basically doing the same things I always have just hopefully a lot better with each release.


Okay, now it's time to check out the new SpaceVerse album! Pick it up now at Bandcamp which will include a CD and digital copy of the album. You can also stream it below.

My fave tracks so far are "Force Ghost (Burden of a Master)", "That Metroplex Life", and "Dude Where's My AT-AT At?" which is hilarious. Ultimate fave is definitely "Cybertronnoiseur" which features a sample of a G1 Transformers theme.