A Definitive Countdown of the '80s Greatest Video Games 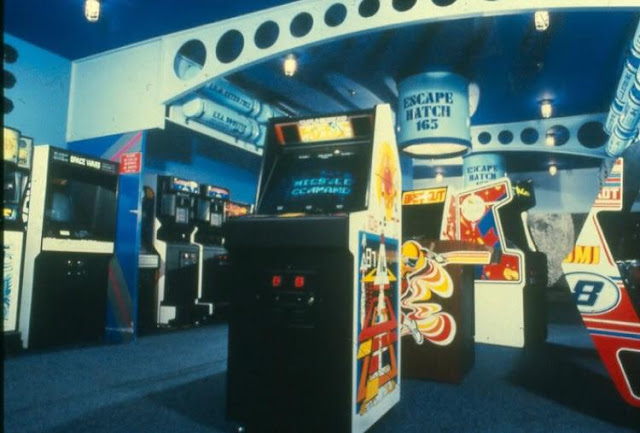 The 1980s spawned some of the most iconic, influential and successful video games of all time. The decade began with the golden age of arcade games and ended with Sega igniting a console war with Nintendo by launching the Genesis to great fanfare.

Along the way it saw a huge array of fantastic releases, and gamers of a certain vintage could argue until they are blue in the face about which were the greatest. Yet, a handful stand out about the rest due to their enduring popularity and sphere of influence. These are the 10 greatest games of the decade:

Dungeon Master is arguably the most influential RPG of all time. It was the bestselling title on the Atari ST and it is credited with dragging the 3D dungeon crawler genre into the mainstream. It inspired countless clones, but none could match Dungeon Master’s atmosphere, depth and detail. Gamers lost whole days of their lives playing it, reviewers heaped praise upon it and eventually more than half of all Atari ST users purchased it, making Dungeon Master a huge commercial success.

This NES launch title looks exceptionally dated now, but in 1984 it became a cultural phenomenon. Gamers would perch on their chairs and use the NES Zapper to shoot ducks that appeared on the screen. The ducks would start moving faster as the game progressed, and the final levels became fiendishly difficult. Reviewers were lukewarm, but sales went through the roof. Duck Hunt managed to make video gaming more accessible and bring new demographics into the sector, much like the Nintendo Wii did 22 years later. It ended up as the third highest selling game of the decade and it still holds a special place in many hearts.

The LucasFilm team spent the 1980s conquering Hollywood with The Empire Strikes Back and Return of the Jedi. Yet they still found time to create this hilarious video game, which follows teenage protagonist Dave Miller as he attempts to rescue his girlfriend inside a haunted house from a mad scientist, whose mind has been enslaved by a sentient meteor. It was not a huge hit upon its release, but it grew to attain cult classic status thanks to its strangely compelling plot and madcap ideas.

Prince of Persia is one of the most iconic series of all time and it began life as a 2D platformer on the Apple II back in 1989. Gamers control the prince as he navigates a sequence of dungeons and catacombs, and they absolutely loved it. Reviewers said it was a tremendous achievement, comparable to Star Wars in the film industry, and they were quick to praise the fluidity of the action and the smoothness of the animation. It was the first game to use motion capture techniques, which was a huge development for video gaming. It spawned many sequels and a film, and Prince of Persia titles are still being made to this day.

Donkey Kong embodies the golden age of arcade gaming. It allowed players to maneuver the protagonist across a series of platforms, while clearing hurdles and dodging obstacles. It was the first video game with a storyline that unfolded visually on the screen, which was a big deal at the time. It invented the single-screen platform game and it was also the first release from the legendary Shigeru Miyamoto, so it is a key piece of gaming history.

Sim City broke new ground for the video gaming industry when it was released at the tail end of the 1980s. It eschewed the ubiquitous alien invaders and monsters, and allowed players to simply build their own cities. There was no end goal in sight, which was wildly different to anything that had come before it. Gamers were used to following platforms, and it took some time to adjust to the concept of simply creating, but they soon appreciated its unique offering and lapped it up.

Nowadays the world’s finest competitive gamers are multimillionaires with legions of fans around the world. Check out the esports betting news, the social media pages of the top esports stars and the YouTube channels of the leading streamers and you will see just how vibrant the sector is. But back in the 1980s competitive gaming simply meant getting the best score at the local arcade, and Pac-Man was the ultimate arcade game. The highest possible score is 3,333,360 points, which is known as a perfect game, and only three people have ever achieved it. Securing the highest Pac-Man score in the arcade was a considerable accolade and it inspired ferocious competition. The game was a tremendous critical and commercial success, and it remains one of the bestselling releases of all time.

3. The Legend of Zelda

This trailblazing action-adventure title frequently scores highly in lists of the greatest games ever made, and it is easy to see why. It brought action, adventure and RPG together in one thrilling package, featuring an engrossing lore, a compelling protagonist and really exciting gameplay. Link was one of the icons of the 1980s and The Legend of Zelda is now a household name, having yielded a huge number of sequels in the ensuing decades. The first title was released in 1986 and it sold more than 6.5 million copies. It is arguably the most influential game ever made, and at the time it was exhilarating thanks to its complexity, its graphics and its open world design.

Super Mario Bros is the most important platform game ever made. Miyamoto also made The Legend of Zelda and Donkey Kong, but this is his masterpiece. At the time many doubted the viability of the video gaming industry after it suffered a huge crash, but Super Mario Bros resuscitated it single-handedly. It basically created the video game industry as we know it, and it remains a monument to fantastic design and exciting gameplay. Mario is arguably the most recognizable cultural icon from the 1980s and at the time children were more familiar with him than Mickey Mouse. It was immensely successful and it remains one of the bestselling games in history.

Tetris is the most ingenious game ever created. Soviet engineer Alexey Pajitnov released it in 1984, but it is still immensely popular 35 years later. No game has ever had such enduring popularity. It is synonymous with the Gameboy, but it has been available on almost every console or handheld device ever made. It sold more than 70 million physical copies and it has had a revival since the advent of smartphones, as more than 100 million users have downloaded it. The concept is simple – arrange falling blocks into horizontal lines – but it is fiendishly challenging and outrageously addictive. It is regularly hailed as the greatest game of all time and deservedly so.