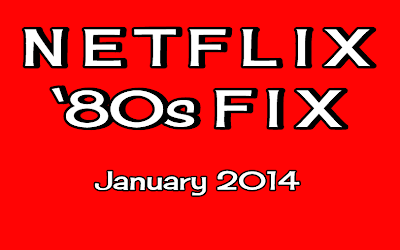 The start of 2014 means a new series of posts that I'm calling "Netflix '80s Fix." Chances are you are one of the 30 million people (like me) who subscribe to the streaming service. At the beginning of each month, I typically use the InstantWatcher app to filter out recently added '80s movies and shows to add to my queue.

I figured I'd pass along my findings each month to the RD80s blog and give other Netflix subscribers the same opportunity to rediscover movies and shows that you might not own on Blu-ray or DVD. I'll be posting Netflix's description and a direct link to each title for quick adding to your queue. I'm also going to list a few "overlooked and underrated" movies I've come across that you may not know are currently available on Netflix.

So without further ado, here is your Netflix '80s Fix for January 2014!

Spaceballs (1987)
Add to queue
In this spoof of the Star Wars trilogy, nefarious Dark Helmet hatches a plan to snatch Princess Vespa and steal her planet's air. Space bum Lone Starr and his clueless sidekick fly to the rescue, with help from Yogurt and the power of "The Schwartz."


This is probably my favorite Mel Brooks film. I use so many lines from this movie to this day that it's probably kinda scary.

This is definitely one I'll be rediscovering this month. Been probably since the '90s that I watched this campy classic.

Bull Durham (1988)
Rated R Add to queue
The perennially pitiful Durham Bulls ink pitching phenom "Nuke" LaLoosh, a gifted but undisciplined rookie, in hopes that he'll usher the team to victory. But it's up to seasoned bush-league catcher "Crash" Davis to keep him in line. Meanwhile, a winsome groupie who confers sexual favors on a new player each season chooses Nuke as this year's beneficiary. The problem is, she's more attracted to Crash.

Harlem Nights (1989)
Rated R Add to queue
Sugar Ray, the proprietor of an illegal casino in 1920s Harlem, must contend with mobsters and corrupt cops who want to put him out of business. But with the help of his promising heir, he pulls out all the stops to stay afloat.

I remember when this movie was on cable all the time. I've always had a fascination with the '20s gangster era, plus this film featured the "who's who" among African-American actors when it was released. I'll enjoy watching this again this month.

Murder, She Wrote (1984-95)
Rated TV-PG Add to queue
Whether at home in cozy Cabot Cove or on the road promoting her popular mystery novels, charming author Jessica Fletcher (Angela Lansbury) always encounters cold-blooded murders that she cleverly solves using her intellect and astounding deduction skills. Lansbury, who was nominated for an Emmy in each of her 12 seasons, stars in this successful whodonit alongside series regulars like Tom Bosley, William Windom and Michael Horton.

One of the most successful shows of all time. It's one I never got into, but I know there are still many fans.

Red Dawn (1984)
Rated PG-13 Add to queue
When a group of teenagers witnesses Soviet and Cuban paratroopers descending on their small town and systematically setting off World War III, they take food and whatever weapons they can find and hightail it to the hills to wait things out.

This is one I rediscovered last year and thought it held up well. The 2012 remake is also available, if you want to compare the two. I'm probably gonna pass.

Baby Boom (1987)
Rated PG Add to queue
In this light-hearted comedy, high-powered management consultant J.C. Wiatt (Diane Keaton) claims her inheritance from a distant relative, only to find out it's a baby. Children are not in her busy life plan, so she intends to put the child up for adoption. But when she realizes she's grown fond of the baby, she suddenly decides to leave her stressful life, move to the country and become a mom. Harold Ramis, Sam Shepard and James Spader co-star.

This is one I might have seen a long time ago, but will definitely revisit sometime this month.

Miss any of your regular holiday movies this year?
Scrooged and Planes, Trains, and Automobiles just became available. National Lampoon's Christmas Vacation has also been held over to January.

Watch It Again For The 80th Time...
The Breakfast Club, Ferris Bueller's Day Off, Trading Places, Say Anything..., Pretty in Pink, Ghostbusters, and The Untouchables are among the highest rated '80s flicks currently available.

BMX Bandits (1983)
Rated PG Add to queue
In this high-flying crime caper featuring plenty of daring stunts, Nicole Kidman makes her film debut as a spirited teen who helps two of her best pals -- both bike-riding hotshots -- turn the tables on a gang of bank robbers.

This movie puts me right back in the middle of growing up in the '80s, the era of BMX. Yeah, it's cheesy and goofy now, but if you have biking memories like I do, it might end up being one of your feel-good classics.

Clue (1985)
Rated PG Add to queue
Director Jonathan Lynn's board game-inspired campfest finds six colorful dinner guests gathered at a mansion, where they all become suspects in the death of the house's owner, who had been blackmailing each of them.

This is one of those movies that seems to appreciate in value the more you watch it. The subtle and witty humor is the main asset now when I watch it.

Many more '80s titles available this month, so feel free to comment with what you've recently rediscovered on Netflix.
Newer
Older