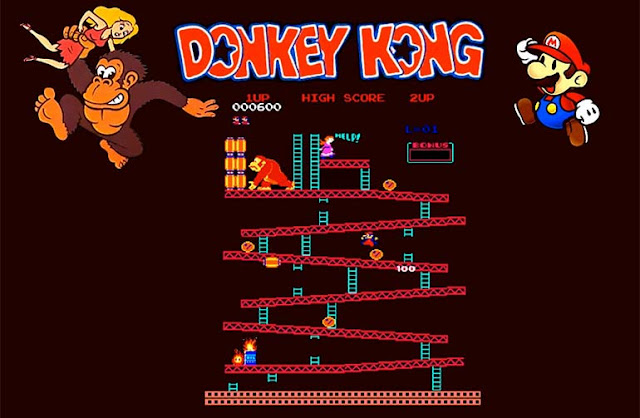 The Strong National Museum of Play announced the 2017 World Video Game Hall of Fame inductees yesterday and among them were Nintendo's 1981 arcade classic Donkey Kong. Joining the king of the apes are Halo: Combat Evolved, Pokemon Red and Green, and Street Fighter II.

Although I wasn't very good at it, Donkey Kong has always been a favorite of mine. One year as a kid in the '80s, I received the portable tabletop version as a birthday or Christmas present. It remained in my possession up until maybe 10 years ago when I decided to part with it on eBay (regretting that now.) The game still worked despite having no battery compartment door. This simplified version of the game was much easier for me to enjoy yet still had the "bells and whistles" of its much larger counterpart.

Donkey Kong was also, of course, our first introduction to Mario aka "Jumpman" and would later be brought to life in the Saturday morning cartoon Saturday Supercade. Donkey Kong's later sequels and the Donkey Kong Country series mostly missed my gaming experience so the original version remains my favorite. To celebrate its induction, check out this short documentary on the game's history by Gaming Historian: